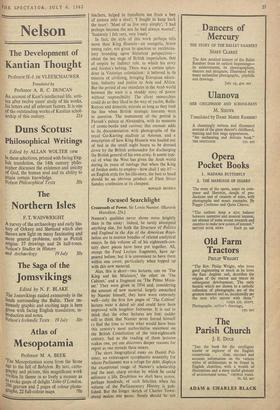 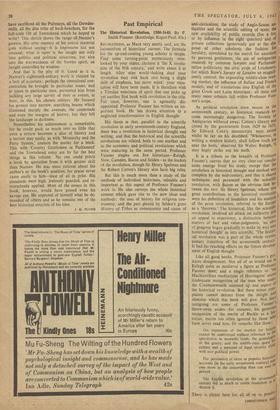 NAMIER'S qualities never shone more brightly than in the essay : indeed, he rarely attempted anything else, for both the Structure of Politics and England in the Age of the American Revo- lution are in essence bundles of related analytical essays. In this volume all of his eighteenth-cen- tury short pieces have been put together. All, except the Ford Lecture fragments, have ap- peared before; but it is convenient to have them within one cover, particularly when topped up with this new material.

Alas, this is short—two lectures, one on 'The King and his Ministers,' the other on 'The Cabinet,' and a fragment on 'The Prime Minis- ter.' They were given in 1934 and, considering the amount of new material, largely unearthed by Namier himself, they have worn extremely well—only the first few pages of The Cabinet' lecture wear a dated air and could have been improved with lengthier footnotes. It is sad to think that the other lectures are lost; sadder still to think that Namier never forced himself to find the time to write what would have been this century's most authoritative statement on the British Constitution of the mid-eighteenth century. Sad as the reading of these lectures makes one, yet one discovers deeper reasons for regret as one rereads these essays.

The short biographical essay on Daniel Pul- teney, an extravagant sycophantic nonentity for whom Parliament was a refuge for debt, displays the exceptional range of Namier's scholarship and the neat, sharp strokes by which he could delineate a life. Doubtless we shall have scores, perhaps hundreds, of such felicities when his volume of the Parliamentary History is pub- lished. But the longer sketch of Charles Town- shend makes one pause. Surely should he not

have sacrificed all the Pulteneys, all the Dowdes- wells, all the dim tribe of back-benchers, for the full-scale life of Townshend which he hoped to write? This sketch shows the range of Namier's powers. His utter mastery of his source material goes without saying—it is impressive but not unusual; what is rarer is the insight not only into politics and political situations, but also into the waywardness of the human spirit, an insight controlled by wisdom.

And that is the pity of it. Good as it is, Namier's eighteenth-century work is vitiated by a lack of s'aucture: perhaps the obsessional con- centration he brought to particular issues, and at times to particular men, prevented him from tackling any large survey of men or events, at least, in this. his chosen century. He focused his powers into narrow, searching beams which illumined sharply the avenues, the crossroads and even the margins of history, but they left the landscape in darkness.

Nevertheless his achievement is remarkable, for he could pack so much into so little that even a review becomes a slice of history and a lecture may easily, as with 'Monarchy and the Party System,' contain the matter for a book. This with 'Country Gentlemen in Parliament' and the Townshend essay are by far the best things in this volume. No one could précis a book by quotation from it with greater skill than Namier. He was more reticent about the author's or the book's qualities, for praise never came easily to him—least of all in print. His standards were high, jealously guarded, and re- morselessly applied. Most of the essays in this book, however, would have passed even his savage eye. He expected of himself what he de- manded of others and so he remains one of the best historical essayists of his time.