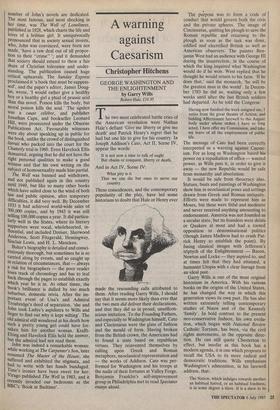 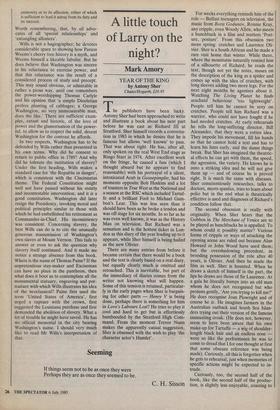 A warning against Caesarism

GEORGE WASHINGTON AND THE ENLIGHTENMENT by Garry Wills

The two most celebrated battle cries of the American revolution were Nathan Hale's defiant 'Give me liberty or give me death' and Patrick Henry's regret that he had but one life to give for his country. In Joseph Addison's Cato, Act II, Scene IV, appear the words: It is not now a time to talk of aught

But chains or conquest, liberty or death.

And in Act IV, Scene IV:

What pity is it That we can die but once to serve our country.

These coincidences, and the contemporary popularity of the play, have led some historians to doubt that Hale or Henry ever

made the resounding calls attributed to them. After reading Garry Wills, I should say that it seems more likely than ever that the two men did deliver their declarations, and that they did so in proud, unselfcon- scious imitation. To the Founding Fathers, and especially to Washington himself, Cato and Cincinnatus were the glass of fashion and the mould of form. Having broken from the British crown, the Americans had to found a state based on republican virtues. They reinvented themselves by calling upon Greek and Roman metaphors, neoclassical representation and — the works of Addison. Cato was per- formed for Washington and his troops at the nadir of their fortunes at Valley Forge. Benjamin Franklin's self-improvement group in Philadelphia met to read Spectator essays aloud.

The purpose was to form a code of conduct that would govern both the civic and the private spheres. The image of Cincinnatus, quitting his plough to save the Roman republic and returning to the plough as soon as the task was done, edified and electrified British as well as American observers. The painter Ben- jamin West had an audience with George III during the insurrection, in the course of which the king inquired what Washington would do if he won. West replied that he thought he would return to his farm. 'If he does that,' said the monarch, 'he will be the greatest man in the world'. In Decem- ber 1783 he did so, waiting only a few weeks until after the last British soldiers had departed. As he told the Congress:

Having now finished the work assigned me, I retire from the great theater of Action; and bidding Affectionate farewell to this August body under whose orders I have so long acted, I here offer my Commission, and take my leave of all the employments of public life.

ism. For as long as Washington based his power on a repudiation of office — wanted power, as Wills puts it, in order to give it away — the new Republic would be safe from monarchy and absolutism.

It would be safe from theocracy also. Statues, busts and paintings of Washington show him in neoclassical poses and settings drawn from Greek and Roman antiquity. Efforts were made to represent him as Moses, but these were fitful and mediocre and never received anything amounting to endorsement. America was not founded as a secular state, but its founders were deists or Quakers at most and had a rooted opposition to denominational politics (though James Madison had to crush Pat- rick Henry to establish the point). By fusing classical images with Jefferson's triptych of the Enlightenment — Bacon, Newton and Locke — they aspired to, and at times felt that they had attained, a humanist Utopia with a clear lineage from an ideal past.

Garry Wills is one of the most original historians in America. With his various books on the origins of the United States, he has changed the way in which this generation views its own past. He has also written extremely telling contemporary studies of Nixon and of the Kennedy 'family'. In bold contrast to the present neo-conservative fashion, his own evolu-

tion, which began with National Review Catholic Toryism, has been, via the civil

rights movements, in the opposite direc- tion. He can still quote Chesterton to effect, but insofar as this book has a modern agenda, it is one which proposes to recall the USA to its more radical and democratic traditions. Wills emphasises Washington's admonition, in his farewell address, that:

The Nation, which indulges towards another an habitual hatred, or an habitual fondness, is in some degree a slave. It is a slave to its animosity or to its affection, either of which is sufficient to lead it astray from its duty and its interest.

Worth remembering, that, by all advo- cates of all 'special relationships' and 'entangling alliances'.

Wills is not a hagiographer; he devotes considerable space to showing how Parson Weems's cherry tree history is a myth, and Weems himself a likeable fabulist. But he does believe that Washington was sincere in his reluctance to exercise power, and that this reluctance was the result of a considered process of study and precept. This may sound obvious, or admirable in rather a pious way, until one remembers the power-worshipping Thomas Carlyle and his opinion that 'a simple Diocletian prefers planting of cabbages; a George Washington, no very immeasurable man, does the like.' There are sufficient exam- ples, extant and historic, of the love of power and the glamorisation of the power- ful, to allow us to respect the solid, decent Washington for the contrast he affords.

In two respects, Washington has to be defended by Wills rather than presented in his own terms. Why did he consent to return to public office in 1789? And why did he tolerate the institution of slavery? Under the first heading, Wills makes a standard case for 'the Republic in danger', which is consistent with the Cincinnatus theme. The Federal Constitution might well not have passed without his stately and incontestable intervention, and it is a good constitution. Washington did later resign the Presidency, invoking moral and political principles similar to those with which he had embellished his retirement as Commander-in-Chief. His inconsistency was consistent. Concerning slavery, the best Wills can do is to cite the unusually generous manumission of Washington's own slaves at Mount Vernon. This fails to answer or even to ask the question why slavery itself continued. And it made me notice a strange absence from this book. Where is the name of Thomas Paine? If the unpretentious stay-maker and Exciseman can have no place in the pantheon, then what does it boot us to contemplate all the monumental statuary, engraving and por- traiture with which Wills illustrates his idea of the neoclassical? Paine first used the term 'United States of America', first urged a rupture with the crown, first suggested the Louisiana purchase and first demanded the abolition of slavery. What a lot of trouble he might have saved. He has no official memorial in the city bearing Washington's name. I should very much like to read Mr Wills's interpretation of that.