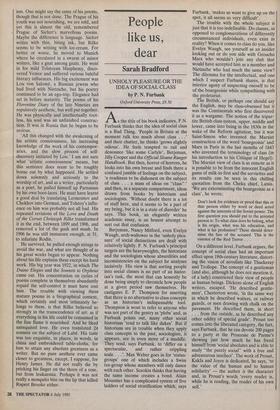 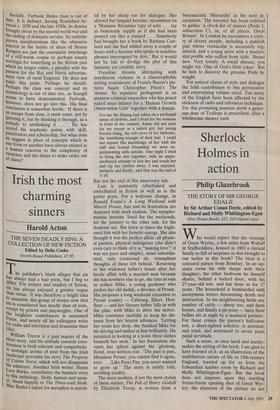 UNHOLY PLEASURE OR THE IDEA OF SOCIAL CLASS by P. N. Furbank

As the title of his book indicates, P.N. Furbank thinks that the idea of social class is a Bad Thing. 'People in Britain at the moment talk too much about class . . .' and their chatter, he thinks 'grows slightly odious'. He feels tempted to rail and denounce 'like some Carlyle', Betjeman, Jilly Cooper and the Official Sloane Ranger Handbook. But then, horror of horrors, he looks into his own breast and finds there a confused jumble of feelings on the subject, 'a readiness to be dishonest on the subject of class . . . a mass of ideas on "class" ' and then, in a separate compartment, ideas drawn from books by historians and sociologists. 'Without doubt there is a lot of stuff here, and it seems to be a part of my being, but it is in a state of disorder' he says. This book, an elegantly written academic essay, is an honest attempt to sort out that confusion.

Betjeman, Nancy Mitford, even Evelyn Waugh, arch-wallower in the 'unholy plea- sure' of social distinctions are dealt with relatively lightly. P. N. Furbank's principal targets are the heavyweights, the historians and the sociologists whose absurdities and inconsistencies on the subject he analyses incisively. His view is that sorting people into social classes is no part of an histor- ian's task, the most that can honestly be done being simply to chronicle how people at a given period saw themselves. He castigates E. P. Thompson for asserting that there is no alternative to class concepts as an historian's indispensable tool. Thompson is wont to refer to anyone who was not part of the gentry as 'plebs' and, as Furbank points out, many other social historians 'tend to talk like dukes'. But if historians are in trouble when they apply class concepts to the past, sociologists, it appears, are in even more of a muddle. They tend, says Furbank, to 'differ on a spectacular, and rather crippling scale . . .'. Max Weber goes in for 'status- groups' one of which includes a Swiss tax-group whose members will only dance with each other. Sorokin thinks that having the same income creates a bond. Alain Mousnier has a complicated system of five ladders of social stratification which, says Furbank, 'makes us want to give up on the spot, it all seems so very difficult'.

The trouble with the whole subject is just that it is too indefinable. Do classes, as opposed to conglomerations of differently circumstanced individuals, even exist in reality? When it comes to class do you, like Evelyn Waugh, see yourself as an insider looking out or do you side with Groucho Marx who wouldn't join any club that would have accepted him as a member and Nietzsche who had much the same view? The dilemma for the intellectual, and one which I suspect Furbank shares, is that interior agony of suspecting oneself to be of the bourgeoisie while sympathising with the proletariat.

The British, or perhaps one should say the English, may be class-obsessed but it was the Continentals who first discovered it as a wargame. The notion of the tripar- tite British class system, upper, middle and lower, came into being in the 1830s in the wake of the Reform agitation, but it was Saint-Simon who invented the Marxist construction of the word 'bourgeoisie' and Marx in Paris in the last months of 1843 who invented the terminology of class (in his introduction to his Critique of Hegel). The Marxist view of class is as remote as it is possible to be from the innocent English game of milk-in-first and the serviettes and its results can be seen in this chilling quotation from the Cheka chief, Latsis. 'We are exterminating the bourgeoisie as a class', he wrote:

Don't look for evidence or proof that this or that person either by word or deed acted against the interests of the Soviet power. The first question you should put to the arrested person is: To what class does he belong, what is his origin, what was his education, and what is his profession? These should deter- mine the fate of the accused. This is the essence of the Red Terror . . .

On a different level, Furbank argues, the concept of social class had an important effect upon 19th-century literature, distort- ing the vision of novelists like Thackeray and Trollope. The concept of a gentleman (and also, although he does not mention it, of a lady) constricted their view of people as human beings. Dickens alone of English writers, escaped. 'He described gentle- men', Chesterton wrote, 'in the same way in which he described waiters, or railway guards, or men drawing with chalk on the pavement. He described them, in short . . . from the outside, as he described any other oddity of special grade'. Proust too comes into the liberated category, the fact, says Furbank, that he can devote 200 pages to a party at the Princesse de Parme's showing just how much he has freed himself from 'social absolutes and is able to study "the purely social" with a free and adventurous intellect'. The work of Proust, Kakfa and Joyce is dedicated, he says, 'to the value of the human and to human solidarity' — the author is the character and, in Proust's words 'every reader is, while he is reading, the reader of his own self.' Socially, Furbank thinks class is out of date. It is defunct, having flourished be- tween C. 1830 and the late 1930s, its demise brought about by the second world war and the ending of domestic service. Its contem- porary manifestations like the obsessive interest in the habits of dress of Sloane Rangers are just the convulsive twitchings of a still-warm corpse or perhaps simply nostalgia for something in the British past Which no longer exists, a parallel with the Passion for the Raj and Hovis advertise- ment view of rural England. He does not make this point. Perhaps he should. Perhaps the class war concept and its terminology is out of date too, as Scargill seems to have demonstrated. Furbank, however, does not go into this. His final Conclusion is somewhat feeble: If there is an escape from class, it must come, not by ignoring it, but by thinking it through, as a Prelude to unthinking it . . .'. He has scored his academic points with skill, penetration and scholarship, but what does he suggest in place of concepts which in one form or another have always existed as a human reaction to the complexity of existence and the desire to make order out of chaos?