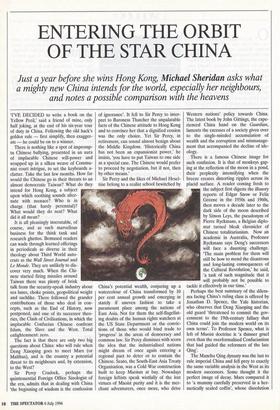 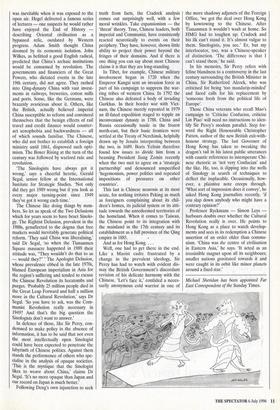 ENTERING THE ORBIT OF THE STAR CHINA

Just a year before she wins Hong Kong, Michael Sheridan asks what a mighty new China intends for the world, especially her neighbours, and notes a possible comparison with the heavens

'I'VE DECIDED to write a book on the Yellow Peril,' said a friend of mine, only half joking, at the end of his six-year tour of duty in China. Following the old hack's golden rule — first simplify, then exagger- ate — he could be on to a winner.

There is nothing like a spot of impromp- tu Chinese bullying, presented in an aura of implacable Chinese will-power and wrapped up in a silken weave of Commu- nist court intrigue, to set the keyboards a- clatter. Take the last few months. How far would the Chinese go in their threats to an almost democratic Taiwan? What do they intend for Hong Kong, a subject upon which soothing sounds alter- nate with menace? Who is in charge (that hardy perennial)? What would they do next? What did it all mean?

The fact is that there are only two big questions about China: who will rule when Deng Xiaoping goes to meet Marx (or Malthus), and is the country a potential threat to its neighbours and, by extension, to the West?

Sir Percy Cradock, perhaps the quintessential Foreign Office Sinologist of the era, admits that in dealing with China 'the beginning of wisdom is the confession of ignorance'. It fell to Sir Percy to inter- pret to Baroness Thatcher the unpalatable facts of the Chinese attitude to Hong Kong and to convince her that a dignified cession was the only choice. Yet Sir Percy, in retirement, can sound almost benign about the Middle Kingdom. 'Historically China has not been an expansionist power,' he insists, 'you have to put Taiwan to one side as a special case. The Chinese would prefer to proceed by negotiation, but if not, then by other means.'

Sir Percy and the likes of Michael Hesel- tine belong to a realist school bewitched by China's potential wealth, conjuring up a watercolour of China transformed by 10 per cent annual growth and emerging in stately if uneven fashion to take a paramount place among the nations of East Asia. Not for them the self-flagellat- ing doubts of the human rights watchers at the US State Department or the convic- tions of those who would bind trade to 'progress' in the areas of democracy and common law. Sir Percy dismisses with scorn the idea that the industrialised nations might dream of once again entering a regional pact to deter or to contain the Chinese. Seato, the South-East Asia Treaty Organisation, was a Cold War construction built to keep Maoism at bay. Nowadays foreign leftists speak wistfully of the lost virtues of Maoist purity and it is the mer- chant adventurers, once more, who drive

Western nations' policy towards China. The latest book by John Gittings, the expe- rienced China hand on the Guardian, laments the excesses of a society given over to the single-minded accumulation of wealth and the corruption and mismanage- ment that accompanied the decline of ide- ology.

There is a famous Chinese image for such confusion. It is that of monkeys gap- ing at the reflection of the moon in a pond, their perplexity intensifying when the breeze creates distorting ripples across its placid surface. A reader coming fresh to the subject first digests the illusory reports of Edgar Snow or Felix Greene in the 1950s and 1960s, then moves a decade later to the dark side of the moon described by Simon Leys, the pseudonym of Pierre Ryckmans, a Belgian diplo- mat turned bleak chronicler of Chinese totalitarianism. Now an academic in Australia, Professor Ryckmans says Deng's successors will face a daunting challenge. 'The main problem for them will still be how to mend the disastrous and long-lasting consequences of the Cultural Revolution,' he said, 'a task of such magnitude that it will probably not be possible to tackle it effectively in our time.'

Perhaps the best summary of the dilem- ma facing China's ruling class is offered by Jonathan D. Spence, the Yale historian, who observes that Deng Xiaoping and the old guard 'threatened to commit the gov- ernment to the 19th-century fallacy that China could join the modern world on its own terms'. To Professor Spence, what is left of Maoist doctrine is 'a thinner gruel even than the overformalised Confucianism that had guided the reformers of the late Qing'.

The Manchu Qing dynasty was the last to rule imperial China and fell prey to exactly the same variable analysis in the West as its modern successors. Some thought it the perfect image of decay. Marx compared it to 'a mummy carefully preserved in a her- metically sealed coffin', whose dissolution was inevitable when it was exposed to the open air. Hegel delivered a famous series of lectures — one suspects he would rather have enjoyed the End of History describing Oriental civilisation as a bypassed relic, outdated by Western progress. Adam Smith thought China doomed by its economic isolation. John Wilkes, as befitted a good English radical, predicted that China's archaic institutions would be consumed by revolution. The governments and financiers of the Great Powers, who dictated events in the late 19th century, did not agree. They rushed into Qing-dynasty China with vast invest- ments in railways, breweries, cotton mills and ports. Some, like the Germans, were brazenly avaricious about it. Others, like the British, actually believed imperial China susceptible to reform and convinced themselves that the benign effects of rail travel and credit finance would counter- act xenophobia and backwardness — all of which sounds familiar. The Chinese, who did not bother to establish a foreign ministry until 1861, disproved such opti- mism. The Boxer Rising at the turn of the century was followed by warlord rule and revolution.

`The Sinologists have always got it wrong,' says a cheerful heretic, Gerald Segal, senior fellow at the International Institute for Strategic Studies. 'Not only did they get 1989 wrong but if you look at every major turning-point since 1949 they've got it wrong each time.'

The Chinese like doing things by num- bers. So let us speak of the Two Delusions which for years seem to have beset Sinolo- gy. The Rightist Delusion, prevalent in the 1980s, genuflected to the dogma that free markets would inevitably generate political reform. 'They said China was liberalising,' said Dr Segal, `so when the Tiananmen Square massacre happened in 1989 their attitude was, "They wouldn't do that to us — would they?" ' The Apologist Delusion, whose prevalence ebbed in the late 1970s, blamed European imperialism in Asia for the region's suffering and tended to excuse the Chinese Revolution its hecatombs and purges. 'Probably 25 million people died in the Great Leap Forward and half a million more in the Cultural Revolution,' says Dr Segal. 'So you have to ask, was the Com- munist Revolution really necessary in 1949? And that's the big question the Sinologists don't want to answer.'

In defence of those, like Sir Percy, con- demned to make policy in .the absence of information, it has to be said that not even the most intellectually open Sinologist could have been expected to penetrate the labyrinth of Chinese politics. Against them stands the performance of others who spe- cialise in the analysis of opaque societies. `This is the mystique that the Sinologist likes to weave about China,' claims Dr Segal. 'It's no more opaque than Japan and our record on Japan is much better.'

Following Deng's own injunction to seek truth from facts, the Cradock analysis comes out surprisingly well, with a few moral wrinkles. Take expansionism — the 'threat' theory. True, Chinese leaders, both imperial and Communist, have consistently reacted neurotically to events on their periphery. They have, however, shown little ability to project their power beyond the fringes of their domains. And if there is one thing you can say about most Chinese claims it is that they are long-standing.

In Tibet, for example, Chinese military involvement began in 1720 when the Emperor Kangxi sent an invasion force as part of his campaign to suppress the war- ring tribes of western China. In 1792 the Chinese also defeated a body of invading Gurkhas. In their border war with Viet- nam, the Chinese merely repeated in 1979 an ill-fated expedition staged to topple an inconvenient dynasty in 1788. China and Russia occasionally tussle in the frozen north-east, but their basic frontiers were settled at the Treaty of Nerchinsk, helpfully drawn up by Jesuits interpreting between the two, in 1689. Boris Yeltsin therefore found few issues to divide him from a beaming President Jiang Zemin recently when the two met to agree on a 'strategic partnership' and denounced unspecified 'hegemonism, power politics and repeated impositions of pressures on other countries'.

This last is Chinese neurosis at its most acute, for nothing irritates Peking as much as foreigners complaining about its chil- dren's homes, its judicial system or its atti- tude towards the unredeemed territories of the homeland. When it comes to Taiwan, the Chinese point to its integration with the mainland in the 17th century and its establishment as a full province of the Qing empire in 1885.

Well, one had to get .there in the end. Like' a Maoist cadre frustrated by a change in the prevalent ideology, Sir Percy has had to watch with evident dis- may the British Government's discordant revision of his delicate harmony with the Chinese. 'Let's face it,' confided a neces- sarily anonymous cold warrior in one of the more shadowy adjuncts of the Foreign Office, 'we got the deal over Hong Kong by kowtowing to the Chinese. After Tiananmen it wouldn't wash at home. So HMG had to toughen up. Cradock and his ilk can't stand it. It's almost vulgar to them. Sinologists, you see.' Er, but my interlocutor, too, was a Chinese-speaker of distinction. `The difference is that I can't stand them,' he said.

In his memoirs, Sir Percy refers with feline blandness to a controversy in the last century surrounding the British Minister in China, Sir Rutherford Alcock, who was criticised for being 'too mandarin-minded' and faced calls for his replacement by `someone fresh from the political life of Europe'.

Those China veterans who recall Mao's campaign to 'Criticise Confucius, criticise Lin Piao' will need no instructions to iden- tify Sir Percy's modep parallel. Step for- ward the Right Honourable Christopher Patten, author of the new British exit-with- honour strategy. The last Governor of Hong Kong has taken to tweaking the dragon's tail in his latest public utterances with caustic references to intemperate Chi- nese rhetoric as 'not very Confucian' and the like. He, too, is dipping into the wells of Sinology in search of techniques to deflect the implacable. Occasionally, how- ever, a plaintive note creeps through. 'What sort of impression does it convey', he asked Hong Kong journalists recently, `if you slap down anybody who might have a contrary opinion?'

Professor Ryckmans — Simon Leys harbours doubts over whether the Cultural Revolution really is over. He points to Hong Kong as a place to watch develop- ments and sees in its redemption a Chinese assertion of an order older than commu- nism. 'China was the centre of civilisation in Eastern Asia,' he says. 'It acted as an irresistible magnet upon all its neighbours; smaller nations gravitated towards it and were caught in its orbit like minor planets around a fixed star.'

Michael Sheridan has been appointed Far East Correspondent of the Sunday Times.