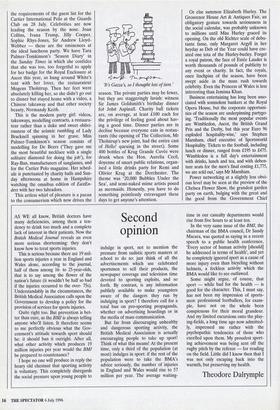 Second opinion AS WE all know, British doctors have many

deficiencies, among them a ten- dency to drink too much and a complete lack of interest in their patients. Now the British Medical Journal reveals an even more serious shortcoming: they don't know how to treat sports injuries.

This is serious because there are 19 mil- lion sports injuries a year in England and Wales alone, according to the journal, half of them among 16- to 25-year-olds, that is to say among the flower of the nation's future (it wouldn't be half so bad if the injuries occurred to the over- 75s). Understandably in the circumstances, the British Medical Association calls upon the Government to develop a policy for the provision of services for sports injuries.

Quite right too. But prevention is bet- ter than cure, as the BMJ is always telling anyone who'll listen. It therefore seems to me perfectly obvious what the Gov- ernment's attitude towards sport should be: it should ban it outright. After all, what other activity which produces 19 million injuries per year would the BMJ be prepared to countenance?

I hope no one will produce in reply the hoary old chestnut that sporting activity is voluntary. This completely disregards the social pressure upon young people to indulge in sport, not to mention the pressure from sadistic sports masters at school to do so: just think of all the advertisements which use celebrated sportsmen to sell their products, the newspaper coverage and television time devoted to sporting exploits, and so forth. By contrast, is any information publicly available to make youngsters aware of the dangers they run by indulging in sport? I therefore call for a total ban on pro-sporting propaganda, whether on advertising hoardings or in the media of mass communication.

But far from discouraging unhealthy and dangerous sporting activity, the British Medical Association is actually encouraging people to take up sport! Think of what this means! At the present time, only a third of the population (at most) indulges in sport: if the rest of the population were to take the BMA's advice seriously, the number of injuries in England and Wales would rise to 57 million per year. The average waiting- time in our casualty departments would rise from five hours to at least ten.

In the very same issue of the BMJ, the chairman of the BMA council, Dr Sandy Macara, was quoted as saying in a recent speech to a public health conference, 'Every sector of human activity [should] be addressed in terms of health', and yet he completely ignored sport as a cause of more injury even than bicycling without helmets, a feckless activity which the BMA would like to see outlawed.

Some might argue, of course, that sport — while bad for the health — is good for the character. This, I must say, has not been my impression of sports- men: professional footballers, for exam- ple, have not on the whole been conspicuous for their moral grandeur. And my limited excursions onto the play- ing-fields, a long time ago now admitted- ly, impressed me rather with the psychopathic tendencies of those who excelled upon them. My proudest sport- ing achievement was being sent off the rugby pitch by the referee — for reading on the field. Little did I know then that I was not only escaping back into the warmth, but preserving my health.