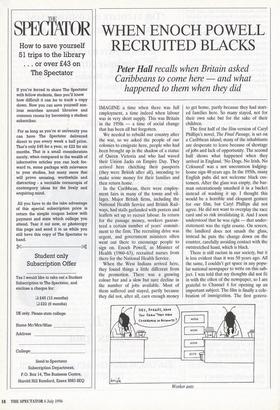 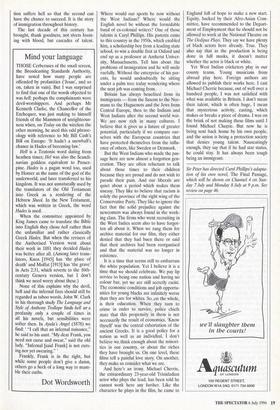 IMAGINE a time when there was full employment, a time indeed when labour was in very short supply. This was Britain in the 1950s — a time of social change that has been all but forgotten.

We needed to rebuild our country after the war, so we asked the people of our colonies to emigrate here, people who had been brought up in the shadow of a statue of Queen Victoria and who had waved their Union Jacks on Empire Day. They arrived here clutching their passports (they were British after all), intending to make some money for their families and then return home.

In the Caribbean, there were employ- ment fairs in many of the towns and vil- lages. Major British firms, including the National Health Service and British Rail- ways, had stalls garlanded with posters and leaflets set up to recruit labour. In return for the passage money, workers guaran- teed a certain number of years' commit- ment to the firm. The recruiting drive was urgent, and government ministers often went out there to encourage people to sign on. Enoch Powell, as Minister of Health (1960-63), recruited nurses from there for the National Health Service.

When the West Indians arrived here, they found things a little different from the promotion. There was a growing colour bar and a slow but sure decline in the number of jobs available. Most of them suffered and stayed, partly because they did not, after all, earn enough money to get home, partly because they had start- ed families here. So many stayed, not for their own sake but for the sake of their children.

The first half of the film version of Caryl Phillips's novel, The Final Passage, is set on a Caribbean island; many of the inhabitants are desperate to leave because of shortage of jobs and lack of opportunity. The second half shows what happened when they arrived in England. 'No Dogs. No Irish. No Coloured' was a not uncommon lodging- house sign 40 years ago. In the 1950s, many English pubs did not welcome black cus- tomers. After the glass was empty, the bar- man ostentatiously smashed it in a bucket instead of washing it up. I thought this would be a horrible and eloquent gesture for our film, but Caryl Phillips did not agree. He did not want to overplay the race card and so risk invalidating it. And I soon understood that he was right — that under- statement was the right course. On screen, the landlord does not smash the glass, instead he puts the change down on the counter, carefully avoiding contact with the outstretched hand, which is black.

There is still racism in our society, but it is less evident than it was 50 years ago. All the same, I couldn't get space in any popu- lar national newspaper to write on this sub- ject. I was told that my thoughts did not fit in with the ethos of the newspaper, so I am grateful to Channel 4 for opening up an important subject. The film is finally a cele- bration of immigration. The first genera- Worker ants tion suffers hell so that the second can have the chance to succeed. It is the story of immigration throughout history.

The last decade of this century has brought, thank goodness, not rivers foam- ing with blood, but cascades of talent. Where would our sports be now without the West Indians? Where would the English novel be without the formidable band of ex-colonial writers? One of those talents is Caryl Phillips. His parents came to this country in the 1950s, which enabled him, a scholarship boy from a leading state school, to win a double first at Oxford and end up as a professor at Amherst Univer- sity, Massachusetts. Tell him about the problems of immigration and he will smile ruefully. Without the enterprise of his par- ents, he would undoubtedly be sitting under a palm tree today wondering where the next job was coming from.

Britain has always benefited from its immigrants — from the Saxons to the Nor- mans to the Huguenots and the Jews from Central Europe, then to the Indians and West Indians after the second world war. We are now rich in many cultures. I believe that it gives us a future of greater potential, particularly if we compare our- selves with the European countries that have protected themselves from the influ- ence of others, like Sweden or Denmark.

But the West Indians who made the pas- sage here are now almost a forgotten gen- eration. They are often reluctant to talk about those times to their children because they are proud and do not wish to parade their pain. And our liberals are quiet about a period which makes them uneasy. They like to believe that racism is solely the province of the right wing of the Conservative Party. They like to ignore the fact that the solid prejudice against the newcomers was always found in the work- ing class. The firms who went recruiting in the West Indies seem also to have forgot- ten all about it. When we rang them for archive material for our film, they either denied that they had been there or said that their archives had been reorganised and that the material -was no longer in existence.

It is a time that seems still to embarrass the white population. Yet I believe it is a time that we should celebrate. We pay lip service to being one nation and having no colour bar, yet we are still secretly racist. The economic conditions and job opportu- nities for young blacks are infinitely worse than they are for whites. So, Lin the whole, is their education. When they turn to crime in order to survive, police chiefs state that this propensity in them is not necessarily the result of economics. 'Know thyself' was the central exhortation of the ancient Greeks. It is a good policy for a nation as well as an individual. I don't believe we, think enough about the minori- ties in our country, or about the riches they have brought us. On one level, these films tell a painful love story. On another, they make us consider what we are.

And here's an irony. Michael Cherrie, the extraordinary 23-year-old Trinidadian actor who plays the lead, has been told he cannot work here any further. Like the character he plays in the film, he came to England full of hope to make a new start. Equity, backed by their Afro-Asian Com- mittee, have recommended to the Depart- ment of Employment that he should not be allowed to work at the National Theatre on The Oedipus Plays. They say we have plenty of black actors here already. True. They also say that as the production is being done in full masks, it doesn't matter whether the actor is black or white.

Yet West Indian cricketers play in our county teams. Young musicians from abroad play here. Foreign authors are allowed to publish their works here. I cast Michael Cherrie because, out of well over a hundred people, I was not satisfied with what was available in Britain. I don't mean their talent, which is often huge, I mean that mysterious activity, casting, which makes or breaks a piece of drama. I was on the brink of not making these films until I found Michael Chortle. But now he is being sent back home by his own people, and the union is being a protection society that denies young talent. Nauseatingly enough, they say that if he had star status, he could stay. It has always been tough being an immigrant.

Sir Peter has directed Caryl Phillips's adapta- tion of his own novel, The Final Passage, which will be shown on Channel 4 on Sun- day 7 July and Monday 8 July at 9 p.m. See review on page 46.