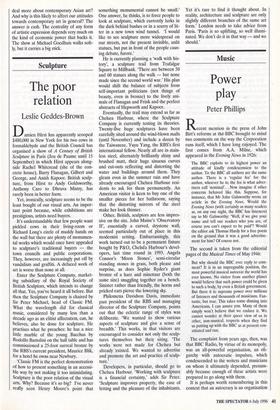 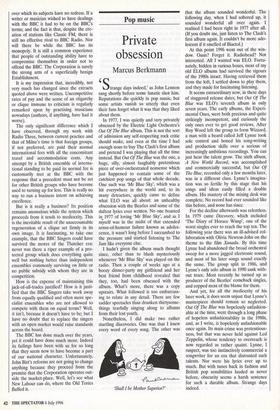 Recent mention in the press of John Birt's reforms at thaBBC brought to mind two comments on the way the Corporation runs itself, which I have long enjoyed. The first comes from A.A. Milne, which appeared in the Evening News in 1926:

The BBC exploits to its highest power an attitude of kindly condescension to the author. To the BBC all authors are the same author. There is a 'regular fee' for the author, whoever he is; the fee is what adver- tisers call 'nominal'... Now imagine if other concerns behaved like this. Suppose, for instance, that Mr John Galsworthy wrote an article in the Evening News. Would the Evening News (with certainly as many readers as, on any one night, the BBC has listeners) say to Mr Galsworthy: 'Well, if we give your name and tell our readers who you are, of course you can't expect to be paid'? Would the editor ask Thomas Hardy for a free poem on the ground that it was a good advertise- ment for him? Of course not.

The second is taken from the editorial pages of the Musical Times of May 1946:

But why should the BBC ever reply to com- ment? It is in an impregnable position, the most powerful musical autocrat the world has ever known. No visitor from another planet would believe that such power could be given to such a body, by even a British government. But there it is: supreme power over millions of listeners and thousands of musicians. Fan- tastic, but true. This takes some dinning into Americans, I can assure you. Many of them simply won't believe that we endure it. We cannot wonder at ,their queer view of us in other, non-musical, respects when they find us putting up with the BBC as at present con- stituted and run.

The complaint from years ago, then, was that BBC Radio, by virtue of its monopoly, was an all-powerful organisation, an oli- garchy with autocratic impulses, which condescended to the writers and musicians on whom it ultimately depended, presum- ably because enough of these artists were prepared to go along with them.

It is perhaps worth remembering in this context that an autocracy is an organisation over which its subjects have no redress. If a writer or musician wished to have dealings with the BBC it had to be on the BBC's terms; and the fact is that, despite the cre- ation of stations like Classic FM, there is still no effective rival to BBC Radio. Nor will there be while the BBC has its monopoly. It is still a common experience that people of outstanding ability have to compromise themselves in order not to offend the BBC. The Corporation is surely the strong arm of a superficially benign Establishment.

It is my impression that, incredibly, not very much has changed since the extracts quoted above were written. Uncompetitive rates of pay and the sense of an oligarchy or clique immune to criticism is regularly remarked upon by practising musicians nowadays (authors, if anything, have had it worse).

The only significant difference which I have observed, through my work with Radio Three, between current practice and that of Milne's time is that foreign groups, if not preferred, are paid their normal international fees with all the concomitant travel and accommodation costs. Any attempt by a British ensemble of interna- tional standing to be paid its normal fee is customarily met at the BBC with the response that a precedent must not be set for other British groups who have become used to turning up for less. This is really no way to run a business intent on achieving excellence.

But is it really a business? Its position remains anomalous while the system which proceeds from it tends to mediocrity. This is the inevitable result of the unaccountable regeneration of a clique set firmly in its own image. It is fascinating, to take one example, that the BBC Singers could have survived the mores of the Thatcher era: never was there a riper example of a pro- tected group which does everything quite well but nothing better than independent ensembles commonly surviving on little or no public subsidy with whom they are in competition.

How is the expense of maintaining this jack-of-all-trades justified? How is it justi- fied that the BBC Singers take work away from equally qualified and often more spe- cialist ensembles who are not allowed to compete with them on equal terms? Well, it isn't, because it doesn't have to be; but I have no doubt that to replace the singers with an open market would raise standards across the board.

The BBC has done much over the years, yet it could have done much more. Indeed its failings have been with us for so long that they seem now to have become a part of our national character. Unfortunately, John Birt's reforms are not going to change anything because they proceed from the premise that the Corporation operates out- side the market-place. Well, let's see what New Labour can do, where the Old Tories fluffed it.