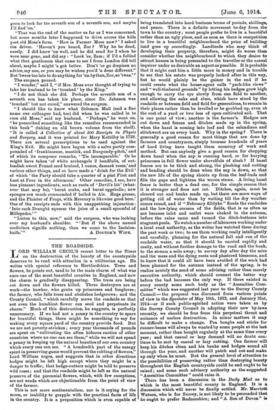 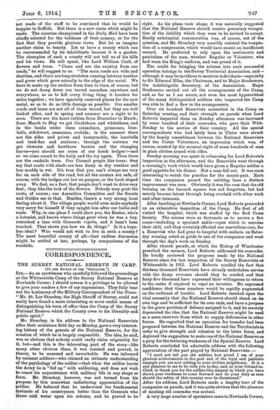 LORD WILLIAM CECIL'S recent letter to the Times on the destruction of the beauty of the countryside deserves to be read with attention in a utilitarian age. He writes with special reference to Hertfordshire. Trees and flowers, he points out, used to be the main charm of what was once one of the most beautiful counties in England, and now the charm is gradually disappearing. The trees are being cut down and the flowers killed. Three destroyers are at work—the hawker, who grubs up primroses and foxgloves ; the farmer, who fells trees and abolishes hedgerows ; and the County Council, " which carefully mows the roadside so that not even the humblest flower can seed and perpetuate its charm." Much of this destruction, he suggests, is perfectly unnecessary. If we had not a penny in the country to spare for beautiful things, there might be something to say for making every square yard of the country provide food. But we are not poverty-stricken ; every year thousands of pounds are spent on "cultivating the often hideous exotics of other countries where no one can see them," while we will not spend a penny in keeping up the natural beauties of our own country which every one can see. "A hundredth part of the energy spent in preserving game would prevent the robbing of flowers," Lord William urges, and suggests that in other directions hedges might be left high except where they might be a danger to traffic; that hedge-cutters might be told to preserve wild roses ; and that the roadside might be left as the natural preserve of the perennial flowers, which, with few exceptions, are not weeds which are objectionable from the point of view of the farmer.

This is not mere sentimentalism, nor is it crying for the moon, or inability to grapple with the practical facts of life in the country. It is a proposition which is even capable of being translated into hard business terms of pounds, shillings, and pence. There is a definite movement te-day from the town to the country; most people prefer to live in a beautiful rather than an ugly place, and as soon as there is competition to live in a beautiful neighbourhood the price of building land goes up accordingly. Landlords who may think of developing their property, therefore, might do worse than consider whether the neighbourhood to which they desire to attract houses is being presented to the traveller or the casual inquirer under as desirable an aspect as possible. It is probable that it might cost him a little more in money and in trouble to see that his estate was properly looked after in this way, but he would plainly be the gainer in the end if he could create what the house-agent calls " park-like views" and "well-timbered grounds" by letting his hedges grow high enough to carry the eye slowly from one field to another, and allowing the oaks and elms, which have stood by the roadside or between field and field for generations, to remain in their places rather than be levelled or be grubbed up, even at the cost of a yard or two less of open cultivated soil. That is one point of view; another is the farmer's. Hedges are cut down and fences and ditches made up in the spring, when the hazel is coming into leaf and the celandines and stitchwort are on every bank. Why in the spring? There is generally a good reason for most things that are done by farmers and countrymen, simply because hundreds of years of hard living have taught them economy of work and method. But can anybody give a good reason for chopping down hazel when the sap is running hard, or for burying primroses in full flower under shovelfuls of slush P If hazel fences are to be thick and strong, the plashing and cutting and bending should be done when the sap is down, so that the new life of the spring shoots up from the leaf-buds and fills the gaps and tightens the woven sterna. A living hazel fence is better than a dead one, for the simple reason that it is stronger and does not rot. Ditches, again, must be cleared out and banks made up, but there are more ways of getting rid of water than by waiting till the dry weather comes round, and if "February filldyke " floods the roadsides and the low-lying corners of the fields, that is as often as not because inlet and outlet were choked in the autumn, before the rains came and turned the ditch-bottoms into stagnant pools. To watch a number of labourers working under a local road authority, as the writer has watched them during the past week or two; to see them working really intelligently and carefully, planning for the natural fall and run of the roadside water, so that it should be carried rapidly and easily, and without further damage to the road and the bank, to the stream a mile away; to survey day after day the mire and the mess and the dying roots'and plastered blossoms, and to know that it could all have been avoided if the work bad been planned for the autumn instead of the spring, is to realize acutely the need of some advising rather than merely executive authority, which should counsel the better way before the bad becomes the only way. If there existed in every county some such body as the " Amenities Com- mittee" which was suggested last year to the Surrey County Council—the proposal was discussed from various points of view in the Spectator of May 10th, 1913, and January 31st, 1914—or if such public-spirited action were taken as by the Surrey County Council in adopting their new by-laws recently, we should be free from this perpetual threat and nuisance of useless destruction. In minor matters it may be difficult to make a change. Pea boughs and sticks for runner-beans will always be wanted by some people at the last moment, rather than bought regularly at the same time every year; and that casual or lazy demand will no doubt con- tinue to be met by casual or lazy cutting. One farmer will keep his ditches clean and his banks and hedges sound all through the year, and another will patch and cut and make up only when he must. But the general level of attention to the possibilities of preserving rather than destroying beauty throughout the English countryside could be and ought to be raised ; and some such advisory authority as the suggested "Amenities Committee " could raise it.

There has been a discussion in the Daily Mail as to which is the most beautiful county in England. It is a discussion which will never be finally settled. Mr. Marriott Watson, who is for Surrey, is not likely to be persuaded that he ought to prefer Radnorshire; and "A Son of Devon" is not made of the stuff to be convinced that he would be happier in Suffolk. But there is a new claim which might be made. The counties championed in the Daily Mail have been chiefly selected for the boldness of their scenery, or for the fact that they provide glorious views. But let us imagine another claim to beauty. Let us have a county which can be recommended by its inhabitants because it is a garden. The champion of such a county will not tell us of his hills and his views. He will speak, like Lord William Cecil, of flowers and trees. " Come and see the country from our roads," he will suggest to us. "The main roads are wide and dustless, and there are long stretches running between heather and gorse which grow actually to the edge of the metal. We have to make up the surface from time to time, of course, but we do not dump down our tarred macadam anywhere and everywhere, so as to kill every living thing it touches for miles together ; we have specially reserved places for the new metal, so as to do as little damage ae possible. Our smaller roads and lanes are not all of them tarred, but they are well looked after, and in spring and summer are a sight to be seen. There are the hazel catkins from December to March; from March to May we get blackthorn and wbitethorn, and in the banks under them celandines, primroses, blue- bells, stitchwort, anemones, orchids ; in the summer there are the elder and privet and honeysuckle, the harebells and toad-flax and scabious ; through the autumn we get clematis and hawthorn berries and the changing leaves—you should see some of our beech hedges!—and so we come round to the holly and the ivy again. Then there are the roadside trees. Our Council people like trees; they say that roads with shade are leas dusty in dry weather and less muddy in wet. It's true that you can't always see very far• on each side of the road, but all the corners are safe, of course, with the hedges cut low on purpose, or• the bank sloped away. We find, as a fact, that people don't want to drive very fast ; they like the look of the flowers. Nobody may grub the roots, of course ; our Amenities Committee and the Scouts and Guides see to that. Besides, there's a very strong local feeling about it. The village people would soon make anybody very sorry for himself if they caught him after our bulbs and roots. Why, in one place I could show you, the Rector, who's a botanist, and knows where things grew when he was a boy, restocked a lane with Osmunda regalia, and it hasn't been touched. That shows you how we do things." Is it a hope- less ideal ? Who would not wish to live in such a county ? The most beautiful county of all—that endless discussion might be settled at last, perhaps, by comparisons of the roadside,