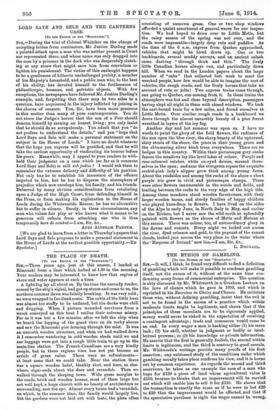 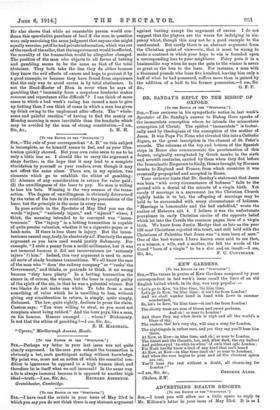 THE ETHICS OF GAMBLING.

Sis,—It will, I think, be found very difficult to find a definition of gambling which will make it possible to condemn gambling itself, not the excess of it, without at the same time con- demning many forms of commercial enterprise. The question is ably discussed by Mr. Whitworth in a Gresham Lecture on the laws of chance which be gave in 1893, and which is reprinted in his Exercises in Choice and Chance. He criticizes those who, without defining gambling, insist that the evil is not to be found in the excess of a practice which within moderate limits might be legitimate, and shows that if the principles of these moralists are to be rigorously applied, money would never be risked in the expectation of receiving a contingent advantage; trade and commerce would come to an end. In every wager a man is backing either (1) his mere luck ; (2) his skill, whether in judgment or bodily or intel- lectual prowess ; or (3) his knowledge or private information. He asserts that the first is generally foolish, the second within limits is legitimate, and the third is contrary to good morals. Mr. Whitworth's writings provide many proofs of his first assertion; any unbiassed study of the conditions under which gambling usually takes place confirms his view, and it is borne out by common experience. As regards the second and third assertions, he takes as one example the case of a man who buys for £120 a piece of land whose agricultural value is 2100, because he thinks that an improvement will be carried out which will enable him to sell it for £150. He shows that the transaction is exactly the same as if he were to bet £20 to £30 that the improvement would be effected, and that if the speculative purchase is right the wager cannot be wrong, He also shows that while no reasonable person would con- demn this speculative purchase of land if the man in question were only exercising the same judgment that anyone else might equally exercise, yet if be had private information, which was out of the reach of the seller, that the improvement would be effected, the morality of the transaction would be altogether changed. The position of the man who objects to all forms of betting and gambling seems to be the same as that of the total abstainer. They both take the line they do either because they know the evil effects of excess and hope to prevent it by a good example, or because they have found from experience that the only way to avoid excess is by total abstinence. Is not the Head-Master of Eton in error when he says of gambling that "immunity from a crapulous headache makes remorse and repentance alike difficult" P I can think of more cases in which a bad week's racing has caused a man to give up betting than I can think of eases in which a man has given up drink owing to the unpleasant after effects. The " whole- some and painful reaction" of having to find the money on Monday morning is more inevitable than the headache which may be avoided by the man of strong constitution.—I am,