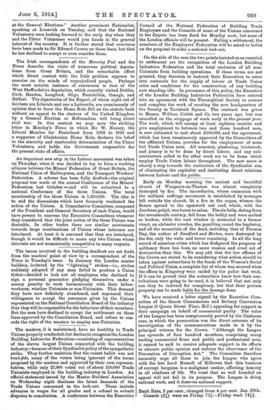 As a set-off to this reading of the movement it

is only fair to quote the statement attributed by the Dublin correspondent of the Daily Chronicle to a prominent official of the National Volunteers. "They are non-political and non-sectarian, and will remain so." The general order issued to every company in Ireland and England runs as follows : "Irish Volunteers acting as such shall not take part in any political movement, or participate in any local government or Parliamentary election, or in any demonstration of a sectional or political character." The official confirmed the statement that various companies in the South of Ireland were armed with rifles, adding that they were modern Service rifles and that the men had subscribed for them. The Chronicle's correspondent goes on to state that the order against political demonstrations has been thoroughly approved of by the Nationalists, and that, paradoxical as it may seem, the desire of the National Volunteers is to join hands with the Ulster Volunteers in order to solve the Irish problem. Thus Mr. Walsh at a meet- ing of Nationalist Volunteers in Antrim declared that Sir Edward Carson bad struck a most effective blow for Irish freedom when he made it possible for Irishmen to arm in defence of their country. "Ireland's fate must be decided by Irishmen, and not by the way in which English people voted

at the General Elections." Another prominent Nationalist, speaking at Limerick on Tuesday, said that the National Volunteers were looking forward to the early day when they and the Ulster Volunteers would join bands in the general interest of the country. It is further stated that overtures have been made to Sir Edward Carson on these lines, but that he has declined to accept or even consider them.