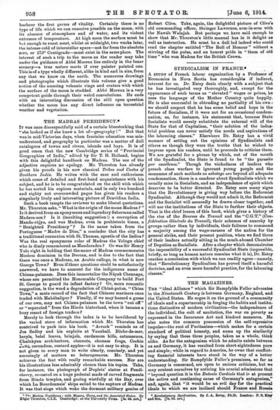 Page 22, 6 June 1914 — THE MADRAS PRESIDENCY.* IT was once disrespectfully said of a
Close

THE MADRAS PRESIDENCY.* IT was once disrespectfully said of a

certain bluestocking that "she looked as if she knew a lot of—geography ! " But that was in add-Victorian days, when feminine education was mis- understood, and geography in particular was a matter of dull catalogues of towns and rivers, islands and bays. It is of good omen that the new Cambridge series of "Provincial Geographies of India," edited by Sir T. H. Holland, begins with this delightful handbook on Madras. The use of the adjective requires no apology. Mr. Thurston has already given his proofs in his now classical Tribes and Castes of Southern India. He writes with the ease and enthusiasm which come of detailed and first-hand acquaintance with his subject, and he is to be congratulated on the skill with which he has sorted his copious materials, and in only two hundred and eighty not overcrowded pages has given his readers a singularly lively and interesting picture of Dravidian India.

Such a book tempts the reviewer to make liberal quotations. Mr. Thurston asks, "What is the origin of the name Madras ? " Is it derived from an eponymous and legendary fisherman called Madam-sen ? Is it (insulting suggestion!) a corruption of Manda-rajya, and was Madras, even in prehistoric times, a "Benighted Presidency "? Is the name taken from the Portuguese "Madre de Dios," a reminder that the city has a traditional connexion with St. Thomas, apostle of the Indies? Was the real eponymous ruler of Madras the Telugu chief who is dimly remembered as Mandaradzu 2 Or was Sir Henry Yule right in holding that the name of Madras commemorates Moslem dominion in the Deccan, and is due to the fact that there was once a Madman, an Arabic college, in what is now George Town? Even if these questions could be satisfactorily answered, we have to account for the indigenous name of Chinna-patanam. Does this immortalize the Nayak Chennapa, whose son permitted the Honourable Company to build Fort St. George to guard its infant factory? Or, more romantic suggestion, is the word a degradation of Chinii-patan, " China Town," a mute record of the fact that Chinese mariners once traded with Ilahabalipur ? Finally, if we may hazard a guess of our own, may not Chinna-patanam be the town "cut off" or "separated " from the Hindu hinterland, when it became a busy resort of foreign traders?

Merely to look through the index is to be bewildered by the varied store of information which Mr. Thurston has contrived to pack into his book. " Arrack " reminds us of Jos Sedley and his exploits at Vauxhall. Bache-de-mer, beryls, betel leaves, brinjals, cardamom hills, catamarans, Chalukyan architecture, cheroots, chunam frogs, Cochin ;"..■,-,a, corundum, custard apples—it is not easy to stop. It is not given to every man to write clearly, concisely, and yet amusingly of matters so heterogeneous. Mr. Thurston achieves the feat with really remarkable success. Nor are his illustrations less admirably chosen than his topics. Take, for instance, the photograph of Dupleix' statue at Pondi- cherry, mounted on a huge pedestal made of carved fragments from Hindu temples, and gazing wistfully at the Bay, over which La Bourdonnais' ships sailed to the capture of Madras. It was that siege which woke the dormant military genius of Ede'. Thurston, C.LE, Cambridge: at the Vniveraity Prep. Vs. 6d. net.J. and Boa. [7e, W. not.)

Robert Clive. Take, again, the delightful picture of Clive's old commanding officer, Stringer Lawrence, arm-in-arm with the Nawab Walajah. But perhaps we. have said enough to show that Mr. Thurston 's little manual has in it delight as well as instruction. He must be a dull lad indeed who could read the chapter entitled "The Roll of Honour" without a stirring of the pulse, and an honest pride in "them of old time" who won Madras for the British Crown.