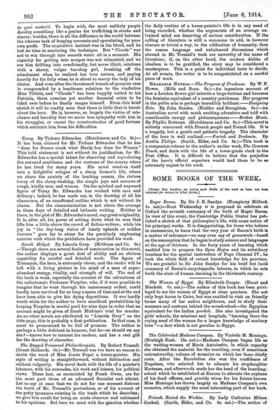 Tansy. By Tickner Edwardes. (Hutchinson and Co. 6s.)— It has

been claimed for Mr. Tickner Edwardes that he has " done for Sussex much what Hardy has done for Wessex." This bold statement is not without its justification, for Mr. Edwardes has a special talent for observing and reproducing the outward semblance and the customs of the county where he has lived for many years. His novel resolves itself into a delightful eclogue of a sheep farmer's life, where we share the anxiety of the lambing season, the riotous hurry of the sheep-washing, the simple joys and sorrows of rough, kindly men and women. On the spirited and wayward figure of Tansy Mr. Edwardes has worked with care and delicacy ; indeed, he has made use, in the drawing of all his characters, of an unsoftened outline which is not without its charm. But the characterization is not above the average in these days of detailed and intimate writing. Neither is there, in the plot of Mr. Edwardes's novel, any great originality, It is, after all, his power of setting down what be sees that lifts him a little above the crowd of fiction-writers; while his joy in "the day-long vision of lonely uplands or sodden furrows " goes far to atone for the peculiarly unpleasing exterior with which the publishers have provided his work.