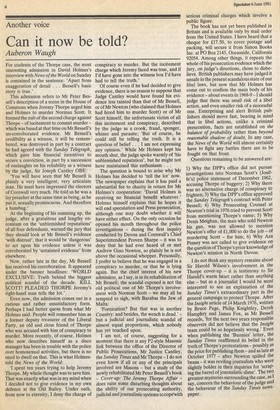 Can it now be told?

For students of the Thorpe case, the most interesting admission in David Holmes's interview with News of the World on Sunday is contained in the sentence: 'Apart from exaggeration of detail . . . Bessell's basic story is true.'

This admission refers to Mr Peter Bessell's description of a scene in the House of Commons when Jeremy Thorpe urged him and Holmes to murder Norman Scott. It formed the nub of the second charge against Thorpe — of incitement to commit murder — which was based at that time on Mr Bessell's un-corroborated evidence. Mr Bessell's credibility as a witness, it will be remembered, was destroyed in part by a contract he had agreed with the Sunday Telegraph, which gave him financial incentives to secure a conviction, in part by a succession of onslaughts on his reliability as a witness by the judge, Sir Joseph Cantley OBE: 'You will have seen that Mr Bessell is plainly a very intelligent, very articulate man. He must have impressed the electors of Cornwall very much. He told us he was a lay preacher at the same time as being, as he put it, sexually promiscuous. And therefore a humbug.'

At the beginning of his summing up, the judge, after a gratuitous and lengthy encomium on the 'unblemished reputations' of all four defendants, warned the jury that they should look at Mr Bessell's evidence 'with distrust', that it would be 'dangerous' to act upon his evidence unless it was corroborated by 'untainted evidence' from elsewhere.

Now, rather late in the day, Mr Bessell has received his corroboration. It appeared under the banner headlines: 'WORLD EXCLUSIVE: Truth behind the biggest political scandal of the decade. KILL SCOTT! PLEADED THORPE Jeremy's right-hand man tells the lot.'

Even now, the admission comes out in a curious and rather unsatisfactory form. Perhaps I had better quote from what Mr Holmes said. People will remember him as a former deputy treasurer of the Liberal Party, an old and close friend of Thorpe who was accused with him of conspiracy to murder. More recently, of course, Holmes who now describes himself as a disco manager has been in trouble with the police over homosexual activities, but there is no need to dwell on that. This is what Holmestold the News of the World: 'I spent ten years trying to help Jeremy Thorpe. My whole thought was to save him. That was exactly what was in my mind when I decided not to give evidence in my own defence at the Old Bailey. Under oath, from now to eternity, I deny the charge of conspiracy to murder. But the incitement charge which Jeremy faced was true, and if I'd have gone into the witness box I'd have had to tell the truth.'

Of course even if he had decided to give evidence, there is no reason to suppose that Judge Cantley would have found his evidence less tainted than that of Mr Bessell, or of Mr Newton (who claimed that Holmes had hired him to murder Scott) or of Mr Scott himself, the unfortunate victim of all this incitement and conspiracy, described by the judge as a crook, fraud, sponger, whiner and parasite; 'But of course, he could still be telling the truth. It is a question of belief. . . I am not expressing any opinion.' While Mr Holmes kept his mouth shut, the judge spoke warmly of 'his unblemished reputation', but he might not have maintained this enthusiasm . . .

The question is bound to arise why Mr Holmes has decided to 'tell the lot' now. The newspaper explains that it has paid a substantial fee to charity in return for Mr Holmes's cooperation: 'David Holmes is receiving no financial benefit whatever.' Holmes himself explains that he hopes it will end speculation and Press persecution, although one may doubt whether it will have either effect. On the only occasion he opened his mouth throughout the police investigations — during the first inquiry conducted by Devon and Cornwall's Chief Superintendent Proven Sharpe — it was to deny that he had ever heard of or met Andrew Gino Newton, so plainly he is not above the occasional whopper. Personally, I prefer to believe that he was engaged in a conspiracy to murder, or that he is lying again. But the chief interest of his new admission, as I say, is in its rehabilitation of Mr Bessell; the scandal exposed is not the old political one of Mr Thorpe's involvement with Norman Scott — we may all be tempted to sigh, with Barabas the Jew of Malta: 'Fornication? But that was in another Country: and besides, the wench is dead.' — but a judicial and journalistic scandal of almost equal proportions, which nobody has yet touched upon.

I am not, of course, suggesting for a moment that there is any P2-style Masonic link between the office of the Director of Public Prosecutions, Mr Justice Cantley, the Sunday Times and Mr Thorpe — I do not even know if all or any of the principals involved are Masons — but a study of the newly rehabilitated Mr Peter Bessell's book — Cover-up: The Jeremy Thorpe Affair — does raise some disturbing thoughts about the ability of our prosecuting authority, judicial and journalistic systems to copewith serious criminal charges which involve a public figure.

The book has not yet been published in Britain and is available only by mail order from the United States. I have heard that a cheque for £17.50, to cover postage and packing, will secure it from Simon Books Inc. at PO Box 2145, Oceanside, California 92054. Among other things, it repeats the whole of his prosecution evidence which the jury, on judge's directions, chose to disbelieve. British publishers may have judged it unsafe in the present scandalous state of our libel laws, but now that Mr Holmes has come out to confirm the main body of his evidence — about events in 1968-9 — I should judge that there was small risk of a libel action, and even smaller risk of a successful one. Enterprising and alert British publishers should move fast, bearing in mind that in libel actions, unlike a criminal persecution, facts are established on the balance of probability rather than beyond reasonable shadow of doubt, In any case, the News of the World will almost certainly have to fight any battles there are to be fought on that front.

Questions remaining to be answered are: 1) Why the DPP's office did not pursue investigations into Norman Scott's (Josiffe's) police statement of December 1962, accusing Thorpe of buggery; 2) Why there was no alternative charge of conspiracy to frighten; 3) Why the DPP's office approved the Sunday Telegraph's contract with Peter Bessell; 4) Why Prosecuting Counsel at Newton's trial in 1976 tried to prevent Scott from mentioning Thorpe's name; 5) Why Denis Meighan, the man who sold Newton his gun, was not allowed to mention Newton's offer of £1,000 to do the job — of murdering Scott — for him; 6) Why Aza Pinney was not called to give evidence on the question of Thorpe's prior knowledge of Newton's mission in North Devon.

I do not think any mystery remains about Sir Harold Wilson's involvement in the Thorpe cover-up — it is testimony to Sir Harold's warm heart rather than anything else — but as a journalist I would be most interested to see an explanation of the Sunday Times's extraordinary part in the general campaign to protect Thorpe. After the Insight article of 14 March 1976, written by Bruce Page, Philip Knightley, Derek Humphry and James Fox, as Mr Bessell records, 'for the next two years responsible observers did not believe that the Insight team could be so hopelessly wrong.' Even when publishing the 'Bunnies' letter, the Sunday Times reaffirmed its belief in the truth of Thorpe's protestations— possibly as the price for publishing them — and as late as October 1977 — after Newton spilled the beans — it was reviling journalists who were slightly bolder in their inquiries for 'scraping the barrel of journalistic slime'. The two greatest mysteries surrounding the case, as I say, concern the behaviour of the judge and the behaviour of the Sunday Times newspaper.