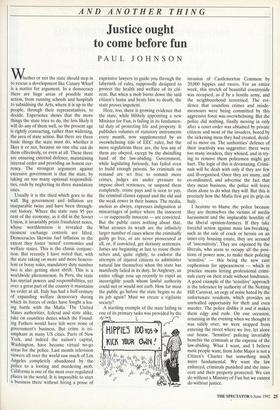 Justice ought to come before fun

blether or not the state should step in to rescue a development like Canary Wharf is a matter for argument. In a democracy there are huge areas of possible state action, from running schools and hospitals to subsidising the Arts, where it is up to the people, through their representatives, to decide. Experience shows that the more things the state tries to do, the less likely it will do any of them well, so the present age is rightly contracting, rather than widening, the area of state action. But there are three basic things the state must do, whether it likes it or not, because no one else can do them effectively, or even at all. These three are ensuring external defence, maintaining internal order and providing an honest cur- rency. The strongest argument against excessive government is that the state, by taking on too many optional responsibili- ties, ends by neglecting its three mandatory ones.

Usually it is the third which goes to the wall. Big government and inflation are inseparable twins and have been through- out history. Where the state runs 95 per cent of the economy, as it did in the Soviet Union, it invariably prints fraudulent notes, whose worthlessness is revealed the moment exchange controls are lifted. Democracies likewise fuel inflation to the extent they foster 'mixed' economies and welfare states. This is the classic conjunc- tion. But recently I have noted that, with the state taking on more and more benevo- lent or bossy roles, mandatory duty number two is also getting short shrift. This is a worldwide phenomenon. In Peru, the state has myriad powers and responsibilities, yet over a great part of the country it maintains no order at all. Italy has had a half-century of expanding welfare democracy during which its forces of order have fought a los- ing battle with the Mafia. The United States authorities, federal and state alike, take on countless duties which the Found- ing Fathers would have felt were none of government's business. But crime is tri- umphant in many US cities. Parts of New York, and indeed the nation's capital, Washington, have become virtual no-go areas for the police. Last month television viewers all over the world saw much of Los Angeles completely abandoned by the police to a looting and murdering mob. California is one of the most over-regulated places in the world. It is impossible to start a business there without hiring a posse of expensive lawyers to guide you through the labyrinth of rules, supposedly designed to protect the health and welfare of its citi- zens. But when a mob burns down the said citizen's home and beats him to death, the state proves impotent.

Here, too, there is growing evidence that the state, while blithely appointing a new Minister for Fun, is failing in its fundamen- tal duty of protecting life and property. It publishes volumes of statutory instruments every month, now supplemented by an overwhelming tide of EEC rules, but the more regulations there are, the less any of them are obeyed, except by the dwindling band of the law-abiding. Government, while legislating furiously, has failed even to build enough prisons. So criminals on remand are set free to commit more crimes, judges are under pressure to impose short sentences, or suspend them completely, crime pays and is seen to pay, the criminal classes expand and the old and the weak cower in their homes. The media, useless as always, expresses indignation at miscarriages of justice where the innocent — or supposedly innocent — are convicted. But the public cares nothing about that. What arouses its wrath are the infinitely larger number of cases where the criminally guilty go free, or are never prosecuted at all, or, if convicted, get derisory sentences. Juries are beginning at last to rouse them- selves and, quite rightly, to endorse the attempts of injured citizens to administer natural law themselves when the, state has manifestly failed in its duty. In Anglesey, an entire village rose up recently to expel an incorrigible youth whom lawful authority could not or would not curb. How far must the public go before the state begins to do its job again? Must we create a vigilante society?

A startling example of the state failing in one of its primary tasks was provided by the invasion of Castlemorton Common by 20,000 hippies and ravers. For an entire week, this stretch of beautiful countryside was occupied, as if by a hostile army, and the neighbourhood terrorised. The evi- dence that countless crimes and misde- meanours were being committed by this aggressive force was overwhelming. But the police did nothing, finally moving in only after a court order was obtained by private citizens and most of the invaders, bored by the sickening mess they had created, decid- ed to move on. The authorities' defence of their inactivity was suggestive: there were too many invaders, they whined, and in try- ing to remove them policemen might get hurt. The logic of this is devastating. Crimi- nals will be dealt with only if they are few and ill-organised. Once they are many, and co-ordinated, and advertise the fact that they mean business, the police will leave them alone to do what they will. But this is precisely how the Mafia first got its grip on Italy.

I hesitate to blame the police because they are themselves the victims of media harassment and the implacable hostility of the liberal opinion-formers. If they take forceful action against mass law-breaking, such as the sale of crack or heroin on an inner-city housing estate, they are accused of 'insensitivity'. They are enjoined by the liberals, who seem to occupy all the posi- tions of power now, to make their policing 'sensitive' — this being the new cant euphemism for appeasement — which in practice means letting professional crimi- nals carry on their trade without hindrance. A good example of the 'sensitive' approach is the tolerance by authority of the Notting Hill Carnival, an orgy of noise hated by the unfortunate residents, which provides an unrivalled opportunity for theft and even murder. The police dislike it and it makes them edgy and rude. On one occasion, returning in the evening when we thought it was safely over, we were stopped from entering the street where we live, let alone our house. 'Sensitive' policing invariably benefits the criminals at the expense of the law-abiding. What I want, and I believe most people want, from John Major is not a Citizen's Charter but something much more fundamental. We want the law enforced, criminals punished and the inno- cent and their property protected. We can do without a Ministry of Fun but we cannot do without justice.