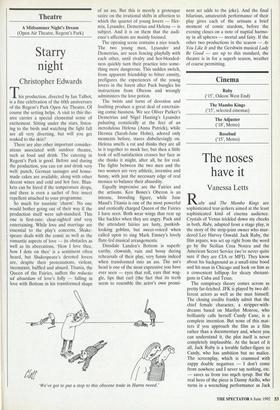 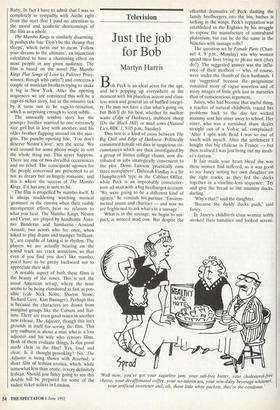 The noses have it

Ruby and The Mambo Kings are sophisticated tear-jerkers aimed at the least sophisticated kind of cinema audience. Crystals of Venus trickled down my cheeks in both. Ruby, adapted from a stage play, is the story of the strip-joint owner who mur- dered Lee Harvey Oswald. Jack Ruby, the film argues, was set up right from the word go by the Sicilian Cosa Nostra and the American Secret Service (we're never quite sure if they are CIA or MFI). They know about his background as a small-time hood and hit-man in Chicago and look on him as a convenient lollipop for sleazy shenani- gans in Cuba and Texas.

The conspiracy theory comes across as pretty far-fetched. JFK is played by two dif- ferent actors as well as the man himself. The closing credits frankly admit that the chief female character, a stripper-with- dreams based on Marilyn Monroe, who brilliantly calls herself Candy Cane, is a complete invention. But none of this mat- ters if you approach the film as a film rather than a documentary and, where you can understand it, the plot itself is never completely implausible. At the heart of it all, Jack Ruby is a lovable father-figure to Candy, who has ambition but no malice. The screenplay, which is crammed with zappy double negatives — I don't come from nowhere and I never say nothing, etc. — saves us from too much syrup. But the real hero of the piece is Danny Aiello, who turns in a wrenching performance as Jack

Ruby. In fact I have to admit that I was so completely in sympathy with Aiello right from the start that I paid no attention to the moral and aesthetic shortcomings of the film as a whole.

The Mambo Kings is similarly disarming. It pushes the line 'Don't be the shrimp that sleeps', which turns out to mean 'Follow your dreams to the ultimate', an injunction calculated to have a chastening effect on most people in any given audience. The film is based on the novel The Mambo Kings Play Songs of Love (a Pulitzer Prize- winner, though who cares?) and concerns a couple of musician brothers trying to make it big in New York. After the opening sequences we are convinced this will be a rags-to-riches story, but as the minutes tick by it turns out to be rags-to-ruination, which is surprising enough to seem subtle. The unusually sombre story has the younger brother married to one extremely nice girl but in love with another, and his older brother flapping around on the mar- gins. The punchy opening line, 'You don't deserve Nestor's love', sets the scene. We wait around for some phony magic to sort the whole thing out. This never happens. There are one or two dreadful occurrences and no relief. The consequent agonies for the people concerned are presented to us not as dreary but as hugely romantic, and this is where the success of The Mambo Kings, if it has any, is sure to lie.

The film is propelled by mambo itself. It is always maddening watching musical 'geniuses' in the cinema when their visibly incompetent efforts bear no relation to what you hear. The Mambo Kings, Nestor and Cesar, are played by handsome Anto- nio Banderas and handsome Armand Assanti, two actors who for once, when asked to play drums and trumpet 'brilliant- ly', are capable of faking it in rhythm. The players we are actually hearing on the sound track are crack musicians, so that even if you find you don't like mambo, you'd have to be pretty backward not to appreciate their skill.

A notable aspect of both these films is the beauty of the noses. This is not the usual American set-up, where the nose seems to be being eliminated as fast as pos- sible (vide Nick Nolte, Sharon Stone, Richard Gere, Kim Basinger). Perhaps this is because the characters are drawn from marginal groups like the Cubans and Ital- ians. There are even good noses in another new release, The Adjuster, though this isn't grounds in itself for seeing the film. This arty outburst is about a man who is a loss adjuster and his wife who censors films.