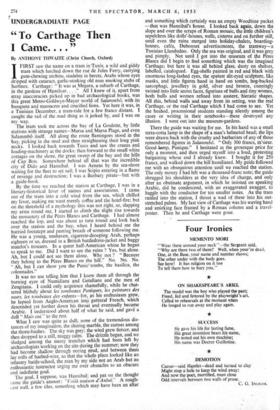 DEMOTION Caesar—said Hamlet—dead and turned to clay Might stop a hole to keep the wind away: And now the poet, mortified, must close Odd intervals between two walls of prose. MEMENTO MORI 'Wear these around your neck"—the. Sergeant said. "Why are there two of them? Well, when your're dead, One, at the Base, your name and number shows; The other under with the body goes. See here! It has religion on it too To tell them how to bury you."

ON SHAKESPEARE'S ARIEL The model was the boy who played-the part; Freed, fed and fettered by the playwright's art. Called to rehearsals at the moment when • He longed to run away and play again.

SUCCESS He gave his life for lasting fame, His great invention bears his name, He tested out his own machine; His name was Doctor Guillotine.