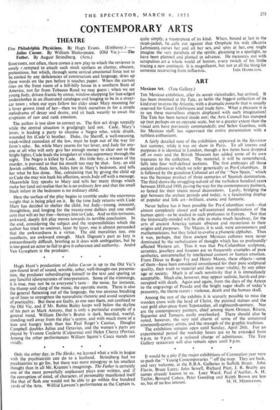 SOMETIMES, not often, there comes a new play to which the reviewer is sorely raempted to attach such stock epithets as clumsy, obscure, pretentious, but which, through some central emotional force not to be cooled by any deficiencies of construction and language, dries up these words on the pen before it touches paper. When the curtain rises on the front room of a hill-billy house in a southern State of America, not far from Tobacco Road we may guess ; when we see young Judy, driven frantic by ennui, window-shopping for lace-edged underclothes in an illustrated catalogue and-longing to be in a street- car town ; when our eyes follow her elder sister Mary mooning for a lover grown tired of her—then we think ourselves in for a simple melodrama of decay and desire, and sit back wearily to await the eruptions of raw and rank emotion.

The author is too slow to correct us. The first act drags torpidly while the central situation is grudgingly laid out. Cade, Mary's lover, is leading a party to chastise a Negro who, while drunk, wounded his (Cade's) brother. Duke, the Sheriff, a well-meaning, weak-willed custodian of the law, must be kept out of the way for form's sake. So, while Mary yearns for her lover, and Judy for any- one at all who will only give her enough money to clear out to the bright lights, Cade leads the irregulars of white supremacy through the night. The Negro is killed by Cade. His little boy, a witness of the murder, is pursued so that his mouth too may be shut. Izzy, an old Jewish cobbler, finds him, hides him in Mary's bedroom, and tells her what he has done. • She, calculating that by giving the child up to Cade she may win back his affection, sends Judy off with a message. Meanwhile Izzy speaks to Mary and tells her many things which make her (and us) realise that he is no ordinary Jew and that the small black infant in the bedroom is no ordinary child.

Here the surface of the play begins to tremble under the enormous weight that is being piled on it. By the time Judy returns with Cade Mary has decided to shelter the child, but Judy—young, innocent, thoughtless, and longing for the twenty-nine dollars and one small coin that will set her free—betrays him to Cade. And so this tortuous, awkward, deeply felt play moves towards its terrible conclusion. In the end, considering the subject and the responsibilities which the author has tried to uncover, layer by layer, one is almost persuaded that the awkwardness is a virtue. The old moralities too, one recollects, are awkward enough. Mark Dignam's part as Izzy is extraordinarily difficult, bristling as it does with ambiguities, but he is too good an actor to fail to give it coherence and authority. Andre Van Gyseghem is the producer.

Hugh Hunt's production of Julius Caesar is up to the Old Vic's new-found level of sound, sensible, sober, well-thought-out presenta- tion, the producer subordinating himself to the text and sparing us any fanciful idiosyncrasies of interpretation. Some of the trimmings, it is true, may not be to everyone's taste : the noise, for instance, the thump and clang of the music, the operatic storm. There is also the general flattening out of the language, the too anxious breaking up of lines to strengthen the naturalistic rhetoric and avoid suspicion of poeticality. But these are faults, as one sees them, not confined to the Old Vic, and if Mr. Robin Bailey keeps well below the skyline of his part as Mark Antony, that is only a particular example of a general trend. William Devlin's Brutus is dark, bearded, woeful, standing well away from the play's centre, and with much more of a lean and hungry look than has Paul Roger's Cassius. Douglas Campbell doubles Julius and Octavius, and the women's parts are played by Yvonne Coulette (Calpurnia) and Helen Cherry (Portia). Among the other performances William Squire's Casca stands out vividly.

Only the other day, in The Shrike, we learned what a wife in league with the psychiatrists can do to a husband. Strindberg had no psychiatristslo go for, but there was more misogyny in his smallest thought than in all Mr. Kramm's imaginings. The Father is certainly one of the most powerfully unpleasant plays ever written, and if the corruption of mind, of character, of personality manifested itself like that of flesh one would not be able to go within five hundred yards of the Arts. Wilfrid Lawson's performance as the Captain is,

quite simply, a masterpiece of its kind. When, bound at last in the strait-jacket, he ,calls out against that Omphale his wife (Beatrix Lehmann), curses her and all her sex, and spits at her, one might imagine the very parabola of the spittle, gleaming in a spotlight, to have been planned and plotted in advance. He measures out with scrupulous art a whole world of horror, every twitch of his limbs tracing a new continent. It is magnificent, but not at all the thing for