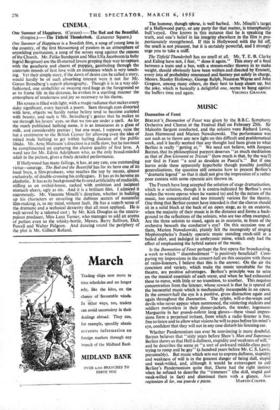 Damnation of Faust BEauoz's.Damnation of Faust was given by the B.B.C. Symphony Orchestra' rchestra and Chorus at the Festival Hall on February 25th. Sir Malcolm Sargent conducted, and the soloists were Richard Lewis, Joan Hammond and Marion Nowakowski. The performance was not such as to throw any new light on this difficult and problematical work, and it hardly seemed that any thought had been given to what Berlioz is really "getting at." We need not believe, with Jacques Barzun, that its philosophical purport deserves "as much meditation as that of Don Giovanni or Tristan" (how much is that, by the way?) nor find in Faust "a soul as desolate as Pascal's." But if one leaves aside these apparently hyperbolic though possibly justified generalisations, the question still remains how to present Berlioz's "dramatic legend" so that it shall not give the impression of a rather poor cantata with some operatic airs thrown in.

The French have long accepted the solution of stage dramatisation, which is a solution, though it is contra-indicated by Berlioz's own wishes (he wrote operas when he wanted to) and by the nature of the music, too concentrated and too minutely various for the theatre. One thing that Berlioz cannot have intended, is that the chorus should sit in a solid block at the back of an open stage, as in an oratorio, when the majority of their music is in the distance and forms a back- ground to the reflections of the soloists, who are too often swamped. Are the three soloists to stand, again as in oratorio, in front of the orchestra beneath the conductor's eye? On this occasion one of them, Marion Nowakowski, plainly felt the incongruity of singing Mephistopheles's frankly operatic music standing stock-still in a boiled shirt, and indulged in embryonic mime, which only had the effect of emphasising the hybrid nature of the music.

Is the Damnation of Faust perhaps the first opera for broadcasting, a work to which " disembodiment "-is positively beneficial? Com- paring my impressions in the concert-hall on this occasion with those Of radio-listeners, I believe that this is the answer. On the air the concision and variety, which make the music unsuitable for the theatre, are positive advantages. Berlioz's principle was to seize on the musical essentials of each scene, and when he had exhausted these to move, with little or no transition, to another. This requires concentration from the listener, whose reward is that he is spared all the inessential music which is mechanically inescapable in an opera. In the concert-hall the eye is a positive, gross distraction again and again throughout the Damnation. The sylphs, will-o-the-wisps and devils who never appear when summoned, the roistering students and soldiers motionless in their dinner-jackets, the tender, ingenuous Marguerite in her grande-toilette long gloves—these visual impres- sions form a perpetual irritant, from which a radio listener is free, free to listen and to allowwhat visions he will to pass before his mind's eye, confident that they will not in any case disturb his listening ear.

Whether Pandemonium can ever be convincing is more doubtful. Barzun believes that "sixty years before Shaw's Man and Superman Berlioz shows us that Hell is dullness, stupidity and weakness of will," and he describes the scene as "a sort of awkward middle-class party trying to romp and be gay" (a hundred years before Mr. C S. Lewis, presumably). But music which sets out to express dullness, stupidity and weakness of will is in the greatest danger of being dull, stupid and weak-willed, and, although it would be extravagant to call Berlioz's Pandemonium quite that, Dante had the right instinct when he refused to describe the "trimmers" (the dull, stupid and weak-willed in fact) and dismissed them with a glance. Non ragioniam di lor, ma guarda e passa. MARTIN COOPER.