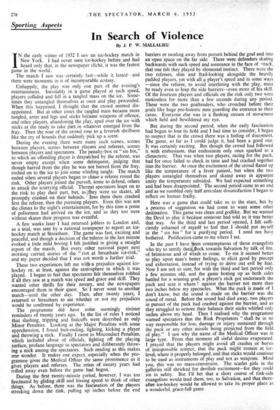 In Search of Violence

By J. P. W. MALLALIEU IN the early winter of 1932 I saw an ice-hockey match in New York. I had never seen ice-hockey before and had heard only that, in the newspaper cliché, it was the fastest game in the world.

The match I saw was certainly fast—while it lasted—and there were moments in it of incomparable ecstasy.

Unhappily, the play was only one part of the evening's entertainment. Inevitably in a game played at such speed, players collided and fell in a tangled mass on the ice. Some- times they untangled themselves at once and play proceeded. When this happened, I thought that the crowd seemed dis- appointed. But at other times the tangled mass became more tangled, arms and legs and sticks became weapons of offence, and other players, abandoning the play, sped over the ice with sticks at the ready to take part in whatever emerged from the fray. Then the roar of the crowd rose to a feverish shrillness like the cry of hounds that suddenly pick up a scent.

During the evening there were many such scenes, scenes between players, scenes between players and referees, scenes between players and spectators. The penalty-box or " sin bin," to which an offending player is despatched by the referee, was never empty except when some delinquent, judging that though barred from the play he was not barred from the fray, rushed on to the ice to join some whirling tangle. The match ended when several players began to chase a referee round the rink. Other players joined the pursuit, some to defend, others to attack the scurrying official. Thereat spectators leapt on to the rink to play their part, but, astfhey wore no skates, all promptly crashed on their behinds. 1 Into them there crashed first the referee, then the pursuing players. Even this was not the climax to the night's entertainment, for by this time a posse of policemen had arrived on the ice, and as they too were without skates their progress was eventful.

A few weeks-later I had returned jobless to London and, as a trial, was sent by a national newspaper to report an ice- hockey match at Streatham. The_game was fast, exciting and peaceful, and though a decision of the 'referee in the last minute evoked a little mild booing I felt justified in giving a straight report of the match. But every other national paper next morning carried stories of the " riot at Streatham ice-rink," and my paper decided that I was not worth a further trial.

These two experiences left me with a prejudice against ice- hockey or at least, against the atmosphere in which it was played. I began to feel that spectators felt themselves robbed if all they saw at a match was speed and grace and skill. They wanted other thrills for their money, and the newspapers encouraged them in their quest. So I never went to another match—until the other day. Then, after twenty years, I returned to Streatham to see whether or not my prejudices would be confirmed by experience. The programme did have some seemingly sinister reminders of twenty years ago. In the list of rules I noticed that slashing, tripping and fisticuffs were described as only Minor Penalties. Looking at the Major Penalties with some apprehension, I found butt-ending, fighting, kicking a player and throwing a stick. Finally I came to Misconduct Penalties, which included abuse of officials, fighting off the playing surface, profane language to spectators and deliberately throw- ing a stick among the spectators. Such reading as this makes one wonder. It makes one expect, especially when the pro- gramme gives the Medical Officer the same prominence as it gives players and referees. The mists of twenty years had rolled away even before the game had begun.

During the first twenty-minute period, however, I was too fascinated by gliding skill and hissing speed to think of other .things. As before, there was the fascination of the players streaking down the rink, pulling up inches before the end barriers or swirling away from pursuit behind the goal and into an open space on the far side. There were defenders skating backwards with such speed and assurance in the face of "ttack, that one felt they played by elemental instinct. There were the two referees, slim and frail-looking alongside the heavily padded players, yet with all a player's speed and in some ways —since the referee, to avoid interfering with the play, must be ready even to leap the side barriers—even more of his skill. Of the fourteen players and officials on the rink only two were motionless for more than a few seconds during any period. These were the two goaltenders, who crouched before their goals like huge pre-historic men guarding the entrance to their caves. Everyone else-was in a flashing stream of movement which held and bewildered my eye.

But during the second period, when the early fascination had begun to lose its hold and I had time to consider, I began to suspect that in the crowd there was a feeling of discontent. The game, so far as I could judge it, had been a good one. It was certainly exciting. But though the crowd had followed it with enthusiasm, that enthusiasm only once sparked to a climacteric. That was when two players, racing for the puck, had for once failed to check in time and had crashed together into the barrier. At once the excitement of the crowd flared up like the temperature of a fever patient, but when the two players untangled themselves and skated away in apparent amity the temperature subsided. We had expected something and had been disappointed. The second period came to an end and as we rumbled only half articulate dissatisfaction I began to reflect on human frailty.

Here was a game that could 'take us to the stars, but by a process of suggestion we had come to want some other destination. This game was clean and godlike. But we wanted the Devil to play it because someone had told us it was better that way. As the third and last period opened, I felt suffi- ciently ashamed of myself to feel that I should put myself in the " sin bin " for 'a purifying period. I need not have bothered. Purification came to me where I sat.

In the past I have lleen contemptuous of those evangelists who try to terrify theiflock towaids Salvation by talk of fire, of brimstone and of wrath to come. To me it seemed better to play upon man's better feelings, to elicit good by precept and exhortation, instead of trying to drive out evil by fear. Now I am not so sure, for with the third and last period only a few minutes old, and the game hotting up as both sides battled for a winning goal, a player's stick got-underneath the puck and sent it wham ! against the barrier not more than two inches below my spectacles. What the puck is made of I don't know, but the sound it made on the barrier was the sound of metal. Before the sound had died away, two players in pursuit of the puck had crashed against the barrier, and as they struggled to restore their balance their sticks whirled only inches above my head. Then I realised why the programme warned spectators that the Rink Proprietors " shall be in no way responsible for loss, damage or injury sustained through the puck or any other. missile being projected from the field of play." I -saw why the name of the Medical Officer was in large type. From that moment all sinful desires evaporated. I prayed that the players might avoid all crashes or bursts of irresponsible temper, that the puck might remain at ice- level, where it properly belonged, and that sticks would continue to be used as instruments of play and not as weapons. Mind you, this. was no- mass-conversion. The- scarlet girls in the galleries still shrieked for devilish excitement—for they could sin in safety. But I'll bet that a short course of rink-side evangelism would lead them, too, to Salvation, and that there- after -ice-hockey would be allowed to take its proper place as a wonderful, grace-full game.