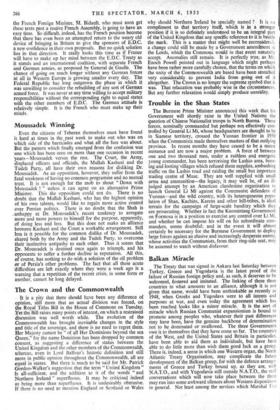 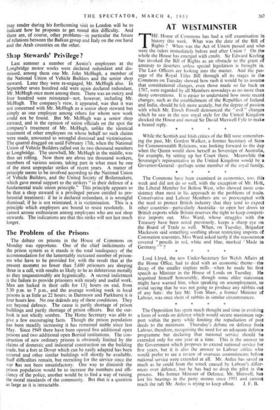 The Treaty that was signed in Ankara last Saturday between Turkey, Greece and Yugoslavia is the latest proof of the failure of Russian foreign policy and, as such, it deserves to be welcomed, fostered and imitated. The linking of these three countries in what amounts to an alliance, although it is not given that name, would have been unthinkable as recently as 1948, when Greeks and Yugoslays were to all intents and purposes at war, and even today the agreement which has been reached looks like a minor miracle. It is the sort of miracle which Russian Communist expansionism is bound to promote among peoples who, whatever their past differences may have been, have the genuine backbone of determination not to be dominated or swallowed. The three Governments owe it to themselves that they have come so far. The countries of the West, and the United States and Britain in particular, have been able to aid them as individuals, but have been able to do little more than wish them good luck as a group. There is, indeed, a sense in which one Western organ, the North Atlantic Treaty Organisation, may complicate the future development of the Balkan group, for with the defence arrange- ments of Greece and Turkey bound up, as they are, with N.A.T.O., and with Yugoslavia still outside N.A.T.O., the staff conversations which will now take place, between the three may run into some awkward silences about Western dispositions in general. Not least among the services which Marshal Tito may render during his-forthcoming visit to London will be to indicate how he Proposis to get round this difficulty. And there are, of course, other problems—in particular the future of relations between the Balkan group and Italy on the one hand and the Arab countries on the other.