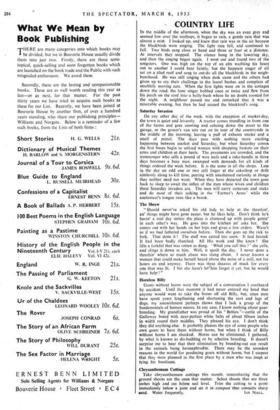 Goats without horns were the subject of a conversation I overheard by accident. Until, that moment it had never entered my head that anyone would want to take the horns off old Billy, but, since men have spent years lengthening and shortening the ears and legs of dogs, my astonishment perhaps shows that I lack a grasp of the fundamentals of human nature. In any case, I know nothing about goat- breeding. My grandfather was proud of his " Bellies "—cattle of the Galloway breed with near-perfect white belts of about fifteen inches in width round their middles. They pleased his eye. I don't think they did anything else. It probably pleases the eye of some people who own goats to have them without horns, but when I think of Billy without horns I am shocked. Horns can be eliminated, I gathered, by what is known as dis-budding or by selective breeding. It doesn't surprise me to hear that their elimination by breeding-out can result in the animals being hermaphrodite. There may be the soundest reasons in the world for producing goats without horns, but I suspect that they were planned in the first place by a man who was inapt at tying his bootlaces.