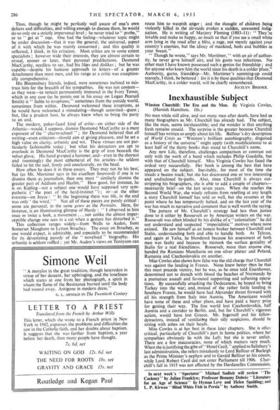 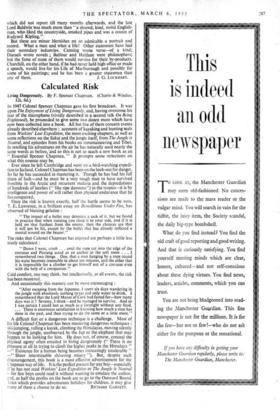 Winston Churchill: The Era and the Man. By Virginia Cowles. (Hamish Hamilton. 18s.) No man while still alive, and not many men after death, have had as many biographers as Mr. Churchill has already had. The subject, like the man, seems inexhaustible; and the wonder is that anything fresh remains unsaid. The surprise is the greater because Churchill himself has written so amply about his life. Balfour's dry description of World Crisis as "Winston's brilliant autobiography, disguised as a history of the universe" might apply (with modifications) to at least half of the thirty books that stand to Churchill's name.

Any new Life, therefore, challenges comparison or contrast not only with the work of a band which includes Philip Guedalla, but with that of Churchill himself. Miss Virginia Cowles has faced the ordeal very successfully. Her book is among the best that have appeared on the subject. Inevitably, for most of the time she treads a beaten track; but she has discovered one or two interesting and undisclosed by-paths. Also, since Churchill is always out- stripping his biographers, she is able to add a couple of chapters— necessarily brief—on the last seven years. When she reaches the Second World War, she wisely refrains from retelling at any length a story Churchill himself has told so well, but she resumes at the point where he has temporarily halted, and on the last year of the war has much in narrative and comment that is well worth the saying.

The pattern of Mr. Churchill's strategy had less than justice done to it either by Roosevelt or by American writers on the war. Roosevelt was often blinded by his dislike of a "colonialism" he did not understand and suspected "imperialistic" motives where none existed. He saw himself as an honest broker between Churchill and Stalin, understanding both and able to handle both. At Tehran, and again at Yalta, he blundered because his assessment of both men was faulty and because he mistook the surface geniality of Stalin for a real friendliness. Roosevelt, more than anyone else, handed the Russians Manchuria on one silver platter and Poland, Rumania and Czechoslovakia on another. "

Miss Cowles also shows how false was the old charge that Churchill was against the landing in France. None knew better than he that this must precede victory, but he was, as he once told Eisenhower, determined not to drench with blood the beaches of Normandy by a premature assault and favoured supporting and softening opera- tions. By successfully attacking the Dodecanese, he hoped to bring Turkey into the war; and, instead of the rather futile landing in Southern France, he would have had Alexander thrust forward with all his strength from Italy into Austria. The Americans would have none of these and other plans, and have paid a heavy price for getting their way. The free world lost Czechoslovakia, half Austria and a corridor to Berlin, and, but for Churchill's vigorous action, would have lost Greece. Mr. Ingersoll and his fellow- detractors, instead of ventilating their silly suspicions, should be sitting with ashes on their heads.

Miss Cowles is at her best in these later chapters. She is often critical, particularly of Churchill's part in home politics, where her sympathies obviously lie with the Left; but she is never unfair. There are a few inaccuracies, none of which matters very much. When she is justifying the gibe of "Hotel Cecil," applied to Salisbury's last administration, she refers mistakenly to Lord Balfour of Burleigh as the Prime Minister's nephew and to Gerald Balfour as his cousin, while Lord Robert Cecil did not enter Parliament till 1906. Chur- chill's fall in 1915 was not affected by the Dardanelles Commission, which did not report till many months afterwards, and the late Lord Baldwin was much more than "a shrewd, kind, stolid English- man, who liked the countryside, smoked pipes and was a cousin of Rudyard Kipling."

But these are minor blemishes on so admirable a portrait and record. What a man and what a life! Other statesmen have had their secondary industries. Canning wrote verse—of a kind; Disraeli wrote novels ; Balfour and Haldane were philosophers; but the fame of none of them would survive for their by-products. Churchill, on the other hand, if he had never held high office or made a speech, would live for his Life of Marlborough and possibly for some of his paintings; and he has been a greater statesman than