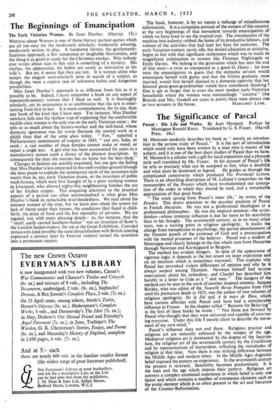 The Beginnings of Emancipation

The Early Victorian Woman. By Janet Dunbar. (Harrap. 15s.) WIUTING about Woman is one of those literary parlour-games which are all too easy for the moderately scholarly, moderately amusing, moderately serious to play. A handsome format, the gentlemanly- facetious approach, a few sumptuous or laughable illustrations, and the thing is as good as ready for the Christmas market. Why nobody ever writes about man in this vein is something of a mystery. His clothes, his appearance, his habits are surely as instructive as his wife's. But no, it seems that they are not. It is woman alone who tempts the elegant semi-scholarly pens in search of a subject, as though she were a captive race of unknown habits. and dangerous possibilities.

Miss Janet Dunbar's approach is as different from this as it is possible to be. Indeed, I never remember a book on any aspect of nineteenth-century woman that 1 liked so well. It is thoroughly scholarly, yet its seriousness is so unobtrusive that the text is enter- taining from first to last. It is more comprehensive, for its size, than any book of the kind that I have seen. For instance, Miss Dunbar nowhere falls into the shallow trap of supposing that the comfortable middle-class woman is the only one on the early Victorian scene ; she tells us as much about the factory-worker and the mill-hand, whose domestic ignorance was far worse (because she started work as a child) than that of the same class today. " Few," reported a Pailiamentary commission of enquiry in 1843, " can sew, bake, or cook ; a vast number of these females cannot make or mend, or repair a single tear. A girl who has been accustomed for years to a manufactory cannot cook a dinner of the plainest description. In consequence the man she marries has no home but the beer-shop."

Changes in fashion are sensibly examined, but one gets the feeling that Miss Dunbar is less interested in this well-trodden ground (though she does pause to explode the sentimental myth of the seventeen-inch waist) than in, say, early Victorian drains, or the invention of public wash-houses, which were first thought of by a poor working woman in Liverpool, who allowed eighty-five neighbouring families the use of her kitchen copper. This enquiring attention to the practical aspects of a period too often sentimentalised is what gives Miss Dunbar's book its remarkable level-headedness. We read about the eminent women of the time, but we learn also about the sewers (or lack of them) under their houses, the conditions they faced in child- birth, the price of food and the low mentality of servants. We are regaled, too, with many pleasing details : as, for instance, that the "small, easily carried luncheon-basket" was an invention of Scott's, the London basket-makers, for use at the Great Exhibition. Crowded restaurants (and possibly the same dissatisfaction with British catering expressed a century later by Festiital visitors) turned the invention into a permanent success. The book, however, is by no means a melange of miscellaneous information. It is a composite portrait of the women of this country at the very beginnings of that movement towards emancipation of which we have lived to see the ironical end. The introduction of the machine into industry robbed the home of its productive labours, and woman of the activities that had kept her busy for centuries. The early Victorian woman, newly idle, but denied education or initiative, began to fret with that significant restlessness which was to reach its magnificent culmination in women like Florence Nightingale or Emily Davies. We belong to the generation which has seen the end of that story—a twist as unexpected as a good 0. Henry ; for how were the emancipators to guess that the domestic servant would emancipate herself with gusto, and that the Girton graduate, once married, would find herself chained to a domestic captivity that her leisured great-great-grandmother would have considered shocking ? One is apt to forget that in even the most modest early-Victorian households where the women were outstandingly "creative" (the Brontes and Mrs. Gaskell are cases in point) there were always one