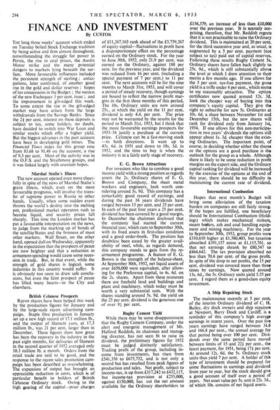 By CUSTOS THE long three weeks' account which ended on Tuesday belied Stock Exchange tradition by being active and firm almost throughout, notwithstanding the struggle for power in Persia, the rise in coal prices, the Austin Motor strike and the many potential dangers to markets lying beneath the sur- face. More favourable influences included the persistent strength of sterling ; antici- pations, later confirmed, of another good rise in the gold and dollar reserves ; hopes of tax concessions in the Budget ; the success of the new Exchequer 3 per cent. issue ; and the improvement in gilt-edged this week. To some extent the rise in the gilt-edged market may have arisen from the large withdrawals from the Savings Banks. Since the 2i per cent. interest on these deposits is subject to tax, some holders, no doubt, have decided to switch into War Loan and similar stocks which offer a higher yield. But the biggest advances in the past account have been in developing gold mines. The Financial Times index for this group rose from 83.68 to 91.48 on the account, a rise of 9.3 per cent. Most of the activity was in the O.F.S. and the Strathmore groups, and it was linked largely with uranium hopes.

Marshal Stalin's Illness The new account opened even more cheer- fully in spite of the news of Marshal Stalin's grave illness, which, even on the most favourable prognosis, will involve the trans- fer of supreme power in Russia to other hands. Usually, when some sudden event throws the world's destiny into the melting pot, professional market operators rush to become liquid, and security prices fall sharply. This time the London market has put a favourable interpretation on the news, to judge from the marking up of bonds of the satellite States and the firmness of most other markets. Wall Street, on the other hand, opened dull on Wednesday, apparently in the expectation that the prospects of peace are now brighter and that a reduction in armament-spending would cause some reces- sion in trade. But, in that event, while the strength of gold shares is logical l some industries in this country would suffer. It is obviously too- soon to draw safe conclu- sions, but even the faint prospect of peace has lifted many hearts-in the City and elsewhere.

British Celanese Prospects Rayon shares have been helped this week by the production figures for January and by the large-scale rayon advertising cam- paign. Staple fibre production in January set up a new high record of 17.1 million lb., and the output of filament yarn, at 17.3 million lb., was 21 per cent. larger than in December. These figures show how great has been the recovery in the industry in the past eight months, for deliveries of filament in the second quarter of 1952 averaged only 10.3 million lb. a month. Orders from the retail trade are said to be good, and the response to the rayon sales promotion cam- paign has been described as overwhelming. The expansion of output has brought an appreciable reduction in costs, which is of particular benefit to holders of British Celanese Ordinary stock. Owing to the high gearing of the capital-prior charges of £11,267,163 rank ahead of the £3,759,267 of equity capital-fluctuations in profit have a disproportionate effect on the percentage earned on the Ordinary stock. For the year to June 30th, 1952, only 21.9 per cent. was earned on the Ordinary, against 188 per cent. for the previous year, and the dividend was reduced from 16 per cent. (including a special payment of 7 per cent.) to 11 per cent. The next accounts will be for the nine months to March 31st, 1953, and will cover a period of steady recovery, though earnings are bound to reflect the narrow profit mar- gins in the first three months of this period. The 10s. Ordinary units are now around 25s., at which the yield on the 11 per cent. dividend is only 4.4. per cent. The price may not be warranted by the results for the period to March 31st, 1953, but I think that the more favourable earnings prospects for 1953-54 justify a purchase at the current price. Celanese can be a fast-moving stock -in both directions. It went up to 43s. 6d. in 1951 and down to 18s. 3d. in 1952, and the time to buy is when the industry is in a fairly early stage of recovery.

E. G. Brown Attractions For investors who like to combine a good income yield with a strong position as regards assets the 2s. Ordinary shares of E. G. Brown and Company, the sheet metal workers and engineers, look worth con- sidering around 5s. 9d. This company has a remarkably good record of earnings, and during the past 16 years dividends have ranged between 15 per cent. and 25 per cent. In each of the past four years a 25 per cent. dividend has been covered by a good margin. In December the chairman disclosed that the company had started the current financial year, which runs to September 30th, with its fixed assets in first-class condition and a good order-book. The position has doubtless been eased by the greater avail- ability of steel, while, as regards demand, this company stands to gain from the re- armament programme. A feature of E. G. Brown is the strength of the balance-sheet. At September-30th, 1952, net liquid assets of over £650,000 were equivalent, after allow- ing for the Preference capital, to 4s. 6d. on the 2s. shares. Apart from these resources there are freehold land and buildings and plant and machinery, which today must be worth a very substantial sum. With the shares standing around 5s. 9d. the yield on the 25 per cent. dividend is the generous one of over 8i- per cent.

Rugby Cement Yield While there may be some disappointment that the Rugby Cement Company, under the alert and energetic management of Mr. Halford Reddish, its chairman and manag- ing director, has not seen fit to raise its dividend, the preliminary figures for 1952 must be judged distinctly satisfactory. Trading profit of the group, including in- come from investments, has risen from £541,356 to £675,752, and is not only a record but has resulted from peak figures of production and sales. Net profit, subject to income-tax, is up from £317,242 to £432,117, but income-tax provision at £255,000, against £150,000, has cut the net amount available for the Ordinary shareholders to £156,379, an increase of less .than £10,000 over the previous year. It is scarcely sur- prising, therefore, that Mr. Reddish regrets that it is not practicable to raise the Ordinary dividend. This is maintained at 20 per cent. for the third successive year and, as usual, is augmented by a 5 per cent. payment (not subject to tax) paid out of capital reserves. Following these results Rugby Cement 5s. Ordinary shares have fallen back slightly to - 25s. 9d., which is still substantially above the level at which I drew attention to their merits a few months ago. If one allows for the 5 per cent. tax-free payment, the gross yield is a trifle under 6 per cent., which seems to me reasonably attractive. The option certificates now quoted around 12s. 3d. look the cheaper way -ef buying into this company's equity capital. They give the right to subscribe for new 5s. Ordinaries at 10s. 6d. a share between November 1st and December 15th, but the new shares will rank for dividend only from January 1st, 1954. If one allows for this non-participa- tion in two years' dividends the options still appear about ls. 3d. cheaper than the exist- ing Ordinaries. The important point, of course, in deciding whether either the shares or the options are a good purchase is the outlook for the group as a whole. Although there is likely to be some reduction in profit margins on the export side, and the Ordinary capital ranking for dividend will be increased by the exercise of the options at the end of this year, there should be no difficulty in maintaining the current rate of dividend.

International Combustion Hopes that next month's Budget will bring some alleviation of the taxation burden on companies are still fairly strong. If the hopes are fulfilled, one beneficiary should be International Combustion (Hold- ings) which makes mechanical stokers, steam boilers, ash and coal handling equip- ment and mining machinery. For the year to September 30Th, 1952, group profits were £310,610 higher at £1,580,403, but %taxation absorbed £391,157 .more at £1,115,761, so that net earnings shrank by £80,547 to £464,642. The tax provision absorbed no less than 70.6 per cent. of the gross profit. In spite of the drop in net profits, the 15 per cent. dividend was covered more than three times by earnings. Now quoted around 13s. 6d., the 5s. Ordinary units yield 5.55 per cent. I regard them as a good-class equity investment.

A Ship Repairing Stock The maintenance recently at 5 per cent. of the interim Ordinary dividend of C. H. Bailey, dry dock owners and ship repairers at Newport, Barry Dock and Cardiff, is a reminder of this company's high average earnings in recent years. Over the past five years earnings have ranged between 34.6 and 166.8 per cent., the annual average for that period being over 100 per cent. Divi- dends over the same period have moved between limits of 15 and 22i per cent., the latest payment, for 1951, being 17i per cent. At around 12s. 6d. the 5s. Ordinary stock units thus yield 7 par cent. A holder of this type of investment should be prepared for some fluctuations in earnings and ...dividend from year to year, but the stock should give a good account of itself over a period of years. Net asset value per 5s. unit is 22s. 3d., of which 10s. consists of net liquid assets.