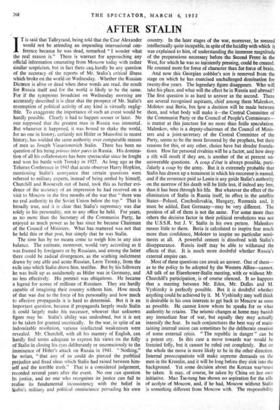 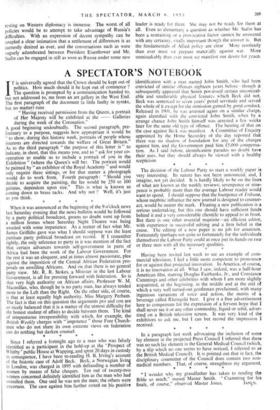 IT is said that Talleyrand, being told that the Czar Alexander would not be attending an impending international con- ference because he was dead, remarked " I wonder what the real reason is." There is warrant for approaching any official information emanating from Moscow today with rather similar scepticism, but in fact there .ca9.-hardly be any question of the accuracy of the reports of Mr. Stalin's critical illness which broke on the world on Wednesday. -Whether the Russian Dictator is alive or dead when these words are read, the result for Russia itself and for the world is likely to be the same. For if the symptoms broadcast on Wednesday morning are accurately described it is clear that the prospect of Mr. Stalin's resumption of political activity of any kind is virtually neglig- ible.. To exaggerate the importance of such an event would be hardly possible. Clearly it had to happen sooner or later. No one supposed that the greatest man in. Russia was immortal. But whenever it happened, it was bound to shake the world, for no one in history. certainly not Hitler or Mussolini in recent history, has wielded the same authority over comparable masses of . men as Joseph Vissarionovich Stalin. There has been no question of his being primus inter pares in Russia. His domina- tion of all his collaborators has been spectacular since he fought and won his battle with Trotsky in 1927. As long ago as the Teheran Conference in 1943 that acute observer Harry Hopkins, mentioning Stalin's annoyance that certain questions were referred to military experts, instead of being settled by himself, Churchill and Roosevelt out of hand, took this as further evi- dence of the accuracy of an impression he had received on a visit to Moscow in the first months of the war that " there was no real authority in the Soviet Union below the top." That is broadly true, and it is clear that Stalin's supremacy was due solely to his personality, not to any office he held. For years, as no more than the Secretary of the Communist Party, he enjoyed as much power as he has since he became Chairman of the Council of Ministers. What has mattered was not that he held this or that post, but simply that he was Stalin. .

The time has by no means come to weigh him in any nice balance. The estimate, moreover, would vary according as it was framed by foreigners or by Russians, and among the latter there could be radical divergences, as the scathing indictment drawn by one able-and acute. Russian, Leon Trotsky, from the exile into which Stalin drove him, testifies. But by his followers he was built up as assiduously as Hitler was in Germany, and no less effectively. His portrait was ubiquitous. He became a legend for scores of millions of _Russians. They are hardly capable of imagining their country without him. How much of that was due to the force of his personality and how much to effective propaganda it is hard to determine. But it is an important question, because if propaganda largely made Stalin it could largely make his successor, whoever that unknown figure may be. Stalin's ability was undoubted, but it is not to be taken for granted uncritically. In the war,.in spite of an indomitable resolution, various intellectual weaknesses were revealed. Mr. Churchill, with all his mastery of English, can hardly find terms adequate to express his views on the folly of Stalin in closing his eyes deliberately or unconsciously to the imminence of Hitler's attack on Russia in 1941. " Nothing," he writes, ".that any of us could do pierced the purblind prejudice and fixed ideas which Stalin had raised between him- self and the terrible truth." That is a considered judgement, recorded several years after the event. No one can question its justice, and no one who recognises its justice can fail to realise its fundamental inconsistency with the belief in Stalin's military and political omniscience pervading his own country. In the later stages of the war, moreover, he seemed intellectually quite incapable, in spite of the luciclity with which it was explained to him, of understanding the immense magnitude of -the preparations tecessary before- the Second Front in the West, for which he was so insistently pressing, could be created. He counted more for force of character than for.force of brain. And now this. Georgian cobbler's son is removed from the stage on which he has exercised unchallenged domination for twenty-five years. The legendary figure disappears. Who will take his place, and what will the effect be in Russia and abroad? The first question is as hard to answer as the second. There are several recognised aspirants, chief among them Malenkov, Molotov and Beria, but how a decision will be made between them, and what body will make it—the Central Committee of the Communist Party or the Council of People's Commissars— is matter at this juncture for no more than futile speculation.

Malenkov, who is a deputy-chairman of the Council of Minis- ters and a joint-secretary of the Central Committee of the Party, seems to be the most favoured by the prophets, but their reasons for this, or any other, choice have but slender founda- tions. How far personal rivalries will be a factor, and how deep a rift will result if they are, is another of the at present un- answerable questions. A coup d'etat is always possible, parti- &daily a coup by the army. But it is extremely probable that Stalin has drawn up a testament in which his successor is named, and if the reverence paid to Lenin* is any guide Stalin's authority on the morrow of his death will be little less, if indeed any less, than it has been through his life. But whatever the effect of the elimination of Stalin in Russia itself, its effect in the satellite Statei—Poland, Czechoilovakia, Hungary, Rumania and, it must be added, East Germany—may be very different. The position of all of them is not the same. For some more than others the decisive factor in their political revolutions was not the U.S.S.R. but J. V. Stalin in his own person. Malenkov means little to them. Beria is calculated to inspire fear much more than confidence,- Molotov to inspire no particular senti- ments at all. A powerful cement is dissolved with Stalin's disappearance. Russia itself may be able to withstand the effects of that. It is :much more doubtful whether Russia's external empire can.

Most of these questions can. await an answer. One of them— as to the policy to be adopted by the Western Allies—cannot.

All talk of an Eisenhower-Stalin meeting, -with or without Mr.

Churchill's participation,--is of course silenced. It so happens that a meeting between Mr. Eden, -Mr. Dulles and M.

Vyshinsky is perfectly possible. But it is doubtful whether anything could be achieved by it. M. Vyshinsky may well think it desirable in his own interests to ggt back to Moscow as soon as possible. He cannot know whom he speaks for or what authority he retains. The seismic changes at home may banish any immediate fear of war, but equally they may actually intensify the fear. In such conjunctures the best way of main- taining internal union can sometimes be the deliberate creation of some external crisis. " The republic in danger " can be a potent cry. In this case a move towards war would be frenzied folly, but it cannot be ruled out completely. But on the whole the move is: more likely to be in the other direction. Internal preoccupations will make supreme demands on the men in the Kremlin, and it will be long before they sink into the background. Yet some decision about the Korean war§must be taken. It may, of course, be taken by China on her own initiative. Mao Tse-tung has shown no aspiration for the role of acolyte of Moscow, and, if he had, Moscow without Stalin is_ something different from Moscow with. The responsibility resting on Western diplomacy is immense. The worst. of all policies would be to attempt to take advantage of Russia's difficulties. With an expression of decent sympathy can be coupled a clear intimation that a settlement of differences is as earnestly desired as ever, and the conversations such as were vaguely adumbrated between President Eisenhower and Mr. Stalin can be engaged in still as soon as Russia under some new leader is ready for them. She may not he ready for them at all. Even so elementary a question as whether Mr. Stalin has been a restraining or a provocative factor cannot be answered .with any certainty. vitally important though the answer is. But the fundamentals of Allied policy are clear More resolutely than ever must we prepare materially against war. More unmistakably than ever must we manifest our desire for peace.