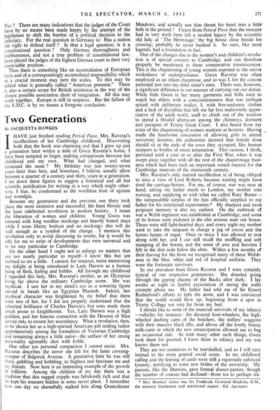 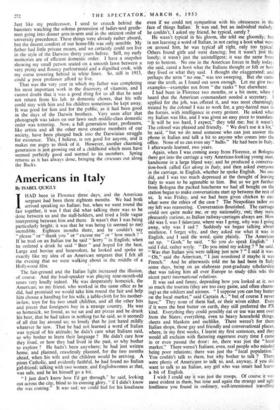 sy JACQUETTA HAWKES IHAVE just finished reading Period Piece, Mrs. Raverat's recollections of her Cambridge childhood. Discovering both that the book was charming and that I grew up just a generation later within a mile of Gwen Raverat's home, I have been tempted to linger, making comparisons between her childhood and my own. What had changed, and what remained the same ? My birthday was just twenty-seven years later than hers, and historians, I believe, usually allow between a quarter of a century and thirty years to a generation. I set down these figures- to suggest a historical and all but scientific justification for writing in a way which might other- wise, I fear, be condemned as the worthless fruit of egoism and nostalgia. Between my generation and the previous one there took place the most extensive and successful, the least bloody and the least celebrated revolution in modern history. I mean th6 liberation of women and children. Young Gwen was tortured with long woollen stockings and heavily boned stays While I wore liberty bodices and no stockings; this will do well enough as a symbol of the change. I mention this revolution only to avoid discussing its results, for it would be silly for me to write of developments that were universal and in no way particular to Cambridge. On the other hand I ought not to enlarge on matters that are too nearly particular to myself—I know this but 'am inclined to err a little. I cannot, for instance, resist mentioning .

my delight at being introduced to Lady Darwin as a human being of flesh, feeling and foibles. All through my childhood I regarded this lady, Mrs. Raverat's mother, as an Olympian living far above the ordinary Cambridge scene. She was mythical. I saw her in my mind's eye as a towering figure carved in basalt like an Egyptian Pharaoh. Indeed, her mythical character was heightened by my belief that there were two of her, for I did not properly understand that the inherited brilliance of Charles Darwin's five sons made them much prone to knighthoods. Yes, Lady Darwin was a high goddess, and her famous connection with the Descent of Man served only to ensure her ascendancy. What a revelation, then, to be shown her as a high-spirited American girl settling rather apprehensively among the formalities of Victorian Cambridge and remaining always a little naive—the surface of her strong personality agreeably shot with foible. One other too personal comparison I cannot resist. Mrs. Raverat describes the terror she felt for the lame crossing- sweeper of Sidgwick Avenue. A generation later he was still there, gabbling and hobbling, to frighten and fascinate me and my friends. Now here is an interesting example of the growth of folklore. Among the children of my day there was a tradition that this ragged cripple was fabulously rich and that he kept his treasure hidden in some secret place. I remember now one day we shamefully stalked him along Grantchester f* Mrs. Hawkes' father was Sir Frederick Gowland Hopkins, 0.M., the eminent biochemist and nutritional expert.—Ed. Spectator. Meadows, and actually saw him thrust his hand into a little` hole in the ground ! I learn from Period Piece that the sweeper had in very truth been left a modest legacy by the eccentric old lady at ' The Hermitage,' the big house close beside his crossing; probably he never banked it. So ours, like most legends, had a foundation in fact.

One of the changes due to the women's and children's revolu- tion is of special concern to Cambridge, and can therefore properly be mentioned in these comparative reminiscences. This is the chaperoning of young women exposed to the native wickedness of undergraduates. Gwen Raverat was often employed as an infant chaperone, and so was I, for the custom. persisted just into my elder sister's time. There was, however, a significant difference in our manner of carrying out our duties.

While little Gwen in her many garments and frills used to watch her elders with a conscientiousness that was perhaps spiced with deliberate malice, I, with free-and-easy clothes and a lack of discipline that left me far less maliciously appre- ciative of the adult world, usefl to climb out of the window to spend a blissful afternoon among the chimneys, dormers and parapets of Trinity Great Court. I also heard from my sister of the chaperoning of women students at lectures. Having made the handsome concession of allowing girls to attend university lectures, the authorities decreed that female dons should sit at the ends of the rows they occupied, like human stoppers to bottles of sweet temptation. This custom, I think, persisted until a year or so after the First War, when it was swept away together with all the rest of the chaperonage busi- ness which had been such an important vested interest for the Cambridge matrons of the nineteenth century.

Mrs. Raverat's only martial recollection is of being obliged to miss a view of Lord Roberts because waiting might have tired the carriage-horses. For me, of course, war was near at hand, taking my father much to London, my mother into nursing, and supplying us with what we called Rats' Butter— the inexpendible surplus of the fats officially supplied to my father for his nutritional experiments.* My sharpest and most poignant memory is also my earliest. On the outbreak of war a Welsh regiment was established at Cambridge, and some of its horses were picketed in the elm avenue near our house. Those were still light-hearted days, and every night my mother used to take the sergeant in charge a jug of cocoa and the horses lumps of sugar. Once or twice I. was allowed to trot along with her, and I can still recall the snuffling and .soft stamping of the horses, and the sense of awe and heroism I felt in the dim aisle below the elms. Within a few months of their leaving for the front we recognised many of these Welsh- men in the blue, white and red of hospital uniform. They were the fortunate survivors.

. In our prevalent fears Gwen Raverat and I were certainly typical of our respective generations.. .She dreaded going through the gaping chasms of the Backs after dark; I-lay awake at night in fearful expectation of seeing the walls crumple about me. My father had told me of Sir Ernest Rutherford's efforts to split the atom, and I was convinced that the world would blow up, beginning from a spot in Trinity College not very far from my bed.

I should like to write of the material survivals of my infancy —vehicles for instance: the decayed four-wheelers, the high- wheeled dashing carts of the butchers, the millers' waggons with their massive black tilts, and above all the lovely brassy milk-carts in which the new emancipation allowed me to beg an occasional ride. As with many other such things, Gwen took them for granted, I knew them in infancy and my son knows them not.

They are too numerous to be marshalled, and so I will turn instead to the more general social scene. In my childhood calling and the leaving of cards were still a rigorously enforced tyranny, terrifying to some new brides of the university. My parents, like the Darwins, gave formal dinner-parties, though the number of courses had declined—from ten to perhaps six. Just like my predecessor, I used to crouch behind the banisters watching the solemn procession of ladies-and gentle- men going into dinner arm-in-arm and in the strictest order of university precedence. These things were already rather absurd, but the decent comfort of our home-life was only sensible. My father had little private means, and we certainly could not live in the style of the Darwins thirty years. before. Still, my early memories are of efficient domestic order. I have a snapshot showing my small person seated on a smooth lawn between a very pretty and flouncy parlourmaid and a dignified cook, with my nurse towering behind in white linen. So, still in 1913, could a poor professor afford to live. That was the very year in which my father was completing his most important work in the discovery of vitamins, and I cannot doubt that it was a good thing for us all that he need not return from his lab. to domestic chores, that his wife could stay with him and his children sometimes be kept away. It was good for him and for the public, as it had been good in the days of the Darwin brothers. Very soon after that photograph was taken on our lawn such middle-class domestic order was tottering. Now, a full generation later, professors, like artists and all the other most creative members of our society, have been plunged back into • the Darwinian struggle for existence. This, I believe, is not good for anyone, and it makes me angry to think of it. However, another charming generation is just growing out of a childhood which must have seemed perfectly good and normal to its members. Spring returns as it has always done, bringing the crocuses out along the Backs.