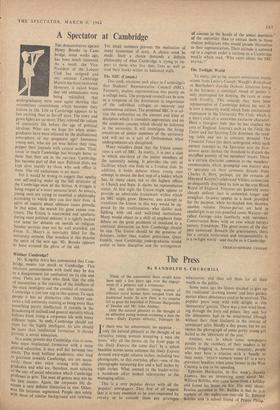 A Spectator at Cambridge

THE demonstration against Henry Brooke in Cam- bridge, some weeks ago, has been much lamented. As a result, the Vice- President of the Labour Club has resigned and one eminent Cambridge Marxist has been rusticated. However, it raised hopes that old enthusiasms were being rekindled; that undergraduates were once again showing that ostentatious commitment which becomes their station in life. Life in Cambridge appears to be less exciting than in far-off days. The town and gown fights are no more. They relieved the tedium of university life before the age of political idealism. What can we hope for when under- graduates have been infected by the disillusioned atmosphere of our pragmatic age? Immature young men, who are yet wise before their time, pepper their journals with cynical asides. Their tussle to reach Cambridge has brought home to them that they are in the rat-race. Cambridge has become part of that race. Political clubs are kept alive mainly by those who seek office in them. The old enthusiasm is no more.

Yet it would be wrong to suggest that apathy and self-seeking make up the full structure of the Cambridge man of the Sixties. A struggle is being waged at a more personal level. As always, young men are trying to establish a philosophy according to which they can live their lives. A spirit of inquiry about ultimate issues prevails. In that sense, the search for great causes •con- tinues. The Union is uncrowded and apathetic during most political debates; it is tightly packed and tense for debates on morals or religion. Sunday services may not be well attended; yet Great St. Mary's is inevitably filled for the university sermon. One wonders if this denotes the spirit of the new age. Mr. Brooke appears to have aroused the ghost of the old.

Mr. Kingsley Amis has commented that Cam- bridge means too much to Cambridge. This introvert preoccupation with itself may be due to a disagreement (or confusion) on its role and aims. There are those who think that the rdle of universities is the training of the intellects of the most intelligent and the conduct of research. Cambridge is just one cog in this system. To such people it has no distinctive role. Others con- ceive a full university training as being more than something purely intellectual. It consists in the broadening of outlook and general maturity which follows from living a corporate life with many different types. As such, Cambridge should not cater for the highly intelligent. Its aim should be more than intellectual formation. It should provide a social education.

In a sense, present-day Cambridge tries to com- bine mere intellectual formation with a more general education. It may well fall between two stools. The most brilliant academics, who tend to gravitate towards Cambridge, are not neces- sarily those who enjoy mixing with under- graduates and who are, therefore, most suitable to the sort of social education which Cambridge professes to give. The man of genius may not be the best master. Again, the corporate life de- mands a very definite limitation in size. Other- wise life becomes segmented. People mix solely with those of similar background and interests.

Yet small numbers prevent the realisation of many economies of scale. A choice must be made. Such a choice demands a definite philosophy of what Cambridge is trying to im- part to those who live their lives as well as read their books within its hallowed walls.

This week, elections took place to Cambridge's first Students' Representative Council (SRC). Formerly, student representation was purely on a college basis. The proposed council can be seen as a symptom of the diminution in importance of the individual colleges as separate and autonomous entities. The proposed SRC is to ad- vise the authorities on the amount and kind of discipline which it considers appropriate and on the academic courses which should be followed in the university. It will investigate the living conditions of junior members of the university and will act as a sort of Ombudsman when undergraduates are disciplined.

Many outsiders think that the Union consti- tutes a sort of SRC. In reality, it is just a club to which one-third of the junior members of the university belong. It provides the sort of facilities which one finds in a London club. In addition, it holds debates where young men attempt to mount the first step of a ladder which has, in many cases, led to the highest offices in Church and State. It claims no representative status. At first sight the Union might appear to provide an admirable framework within which an SRC might grow. However, any attempt to transform the Union in this way would be op- posed by the traditionalists who dislike such fiddling with old and well-tried institutions. Many would object to a shift of emphasis from debate on the great problems of mankind to a continual discussion on how Cambridge should be run. The Union should be the preserve of debaters, rather than student politicians. Quite frankly, most Cambridge undergraduates would prefer to leave discipline and the arrangement

of courses in the hands of the senior members of the university than to entrust them to those student politicians who would parade themselves as their representatives. Their attitude is summed up in a caption under a cartoon in a Cambridge weekly which read, 'Who cares about the SRC anyway?'•

To many, life at the ancient universities recalls scenes from Leslie's Cantu!), Waugh's Brideshead or Beerbohm's Zuleika Dobson. Gracious living is the keynote; a continual round of parties is only interrupted for hunting, the races or some such frivolity. This concept may have been representative of Cambridge before the war. It is now a minority world which finds institutional expression in the University Pitt Club, which is a men's club of a somewhat exclusive character. Here a foreigner feels that he has reached the core of England. Journals such as the Field, the Taller and the Sporting Life dominate the read- ing table and are in constant demand. The Financial Times lies there unfingered, while such earnest journals as the Spectator and the Eco- nomist never darken the threshold to disturb the unruffled serenity of the members' brows. There is a certain character common to the members' countenancts which prompted one history don to speculate on their common descent from Charles II. Here, perhaps, are the remains of Maynard Keynes's celebrated Villiers connection so eloquently described by him as the true Blood Royal of England. Features are generally more sharply defined; hair is somewhat longer and straighter. In-jokes appear in a book provided for the purpose, while far-fetched bets decorate another volume. Dinner-parties are held in candlelight in an oak-panelled room. Waiters—all called George—joke familiarly with members. Conversation flows with an case which betrays nursery friendships. The great issues of the day pass unnoticed. Beneath the graciousness, there lies a certain irrelevance and irresponsibility. It is a twilight world—and maybe so is Cambridge.