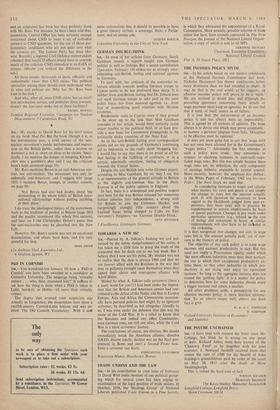 SIR,—In his article based on our modest submission to the National Incomes Commission last week, Nicholas Davenport has drawn conclusions rather more dismissive than we had intended to imply. It may be that in the real world, as he suggests, an effective incomes policy will prove to be ,a 'myth.' We are inclined to doubt this; and although the prevailing ignorance concerning many details of wage payment must keep us agnostic, we do not feel that it need, of itself, assure us of failure.

It is true that 'the enforcement of an incomes policy is and has always been an impossibility.' This is agreed by all sections of opinion. The hope always is to devise one which may prove acceptable : to borrow a perverse epigram from Saki, `Discipline to be effective must be optional.'

It does not seem quite fair to say that 'wage drift has not even been allowed for in the Government's "wages policy." ' Admittedly the first attempts at such a policy were crude: they amounted, in essence, to checking increases in nationally-nego- tiated wage rates. But this was simply because these wage rates are, by definition, the only component of earnings hitherto amenable to central control. More recently, however, the emphasis has shifted : in the White Paper of February, 1962 (on Incomes Policy: The Next Step), we read that :

In considering increases in wages and salaries what matters for costs and prices is not simply the change in rates but the amount actually paid. It will therefore be necessary to have regard to the likelihood, judged from past ex- perience, that basic rates will in practice be supplemented in certain employments by local or special payments. Changes in pay made under particular agreements (e.g., related tfa the cost

' of living) and reductions in hours or similar improvements will also have to be inciuded in the reckoning.

It is thus recognised that changes, not only in wage rates but in `the amount actually paid,' are of con- cern to the framers of policy.

The objective of any such policy is to keep wage incomes and national productivity in step. But this need not imply a Procrustean rigidity under which 'the most efficient industries must deny their workers the rise to which their exceptional productivity en- titles them, so that other industries in which pro- ductivity is not rising may enjoy an equivalent increase.' So long as the aggregate increase does not exceed the 'guiding light,' it is a matter for policy to determine how far some industries should enjoy a bigger increase and others a smaller. , All other problems aside, a prerequisite for any effective incomes policy is more detailed informa- tion. To an almost empty mill, almost any hard fact is grist.