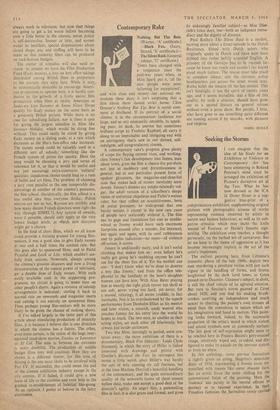 Nothing But The Best.

Strand, 'X' certificate.)— The Silent Raid. (General release, `LP certificate.) TIMES have changed with a vengeance since the post-war years when, as Miss Spark put it, 'all the nice people were poor (allowing for exceptions)'; and with class and money our national ob- sessions these days, it isn't surprising that a film about them should strike home. Clive Donner's Nothing But Tly Best is social com- ment at firsthand. If its portrait of a social climber is in the circumstances (audience too large, and so on) necessarily unsubtle, its spank- ing pace, its dash, its uneven but sometimes brilliant script by Frederic Raphael, all carry it along to an improbable and intriguing end with an astringency that's new in our shrewd, self- indulgent, self-congratulatory cinema.

A contemporary rake's progress gives plenty of scope for flaying current vices, and working- class Jimmy's fast development into James, man about town, gives the film a chance for pot-shots not just at snobbery and pretentiousness in general, but at our particular present form of opulent glossiness, the magazine-and-shop-fed taste that makes lack of money inevitably seem dowdy. Jimmy's dreams are simple-mindedly vul- gar, the adult version of a schoolboy's sleepy vision of unlimited chipolatas and Fuller's walnut cake; but they reflect an acquisitiveness, born of social pressures, so widespread that one barely notices it except in the now rare cases of people very noticeably without it. The film has its gaps and limitations (no one as nimble- witted as Jimmy would leave such enormous footprints around after a murder, for instance), but again and again, with its cool ruthlessness and its polite indication—no more—of violence off-screen, it scores.

Jimmy is undilutedly nasty, and it isn't social climbing that makes him so: even before he's really got going he's snubbing anyone he can't use for the sheer fun of it. Yet his mother can coo: 'I don't know what we've done to deserve a boy like Jimmy,' and from the office tele- phonist to the landlady to the boss's daughter women can love him. With Alan Bates playing him at exactly the right pitch (never too shrill or too soft, never trying too hard, yet never, for a second, relaxing), it all seems credible, in fact inevitable. Nor is he overshadowed by the superb performance from Denholm Elliot as his mentor and later victim, a stoutish, seedy wastrel who coaches Jimmy for his entry into the world he hopes to reach. The two men, so unalike in their acting styles, set each other off hilariously, but always just inside caricature.

Two war films, movingly in period, seem cen- turies away: the more ambitious of them is a documentary, Black Fox (director: Louis Clyde Stoumen), in which the story of Hitler is linked (newsreel with drawings and prints) with Goethe's Reynard the Fox. In retrospect this seems a little weird, since Hitler's was hardly the sort of wily cunning we call foxiness, but at the time Marlene Dietrich's beautiful handling of the commentary, and the quite extraordinary quality of the newsreels (some of them unseen before this), make one accept a good deal of the director's agility. An angry film, a pummelling film in fact, it is also grave and formal, and gives its sickeningly familiar subject—as Miss Diet- rich's voice does, too—both an indignant imme- diacy and the dignity of distance.

Paul Rotha's The Silent Raid is a modest, moving story about a (true) episode in the Dutch Resistance, filmed with Dutch actors who originally spoke in Dutch and have now been dubbed into rather heftily accented English. A prisoner of the Gestapo had to be rescued be- cause he knew too much and couldn't (he knew) stand much torture. The rescue must take place in complete silence, else the German police headquarters just across the street would hear. Rotha holds the tension till the last minute. This isn't hindsight, it has the spirit of twenty years ago, and it seems incredible that a film of this quality, by such a director, should have gone out as a second feature on general release without even a press show. But people, I hear, who have gone to see something quite different are coming across it by mistake, with pleasure and surprise.