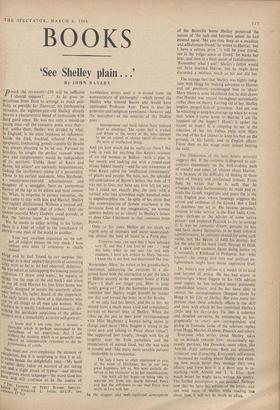 ouch the reviewers-110 will be sufficient I should suppose? . . .' As he gives in- structions from Eton to arrange as much pub- licity as possible for Zastrozzi, his forthcoming romance, the eighteen-year-old Shelley already reveals a characteristic blend of enthusiasm with hard good sense. He was not only a mixed-up Young man—all the romantic poets were that— but, unlike them, Shelley was divided by what, in England, is the most insidious of influences. Inside the frail, freckled, ethereal Percy an apoplectic, foxhunting, grossly capable Sir Bysshe Was always shouting to be let out. 'Pursued by heredity, he sought the perfect vacuum where love and enlightenment would be independent of its atavisms. Unlike those of Keats and Byron, his letters* are curiously unspontaneous, lacking the involuntary stamp of a personality. Those to his earliest soul-mate, Miss Hitchener, a twenty-nine-year-old schoolmistress and daughter of a smuggler, have an anonymous flavour of the age at its silliest and most roman- tic. When, in response to earnest entreaties, she later came to stay with him and Harriet, Shelley Was rapidly disillusioned. Without a natural self, he could not accept that of others. Only the sixteen-year-old Mary Godwin could provide, at

first, the 'intense inane' he required. • Yet he seems to enjoy writing to his father; there is a kind of relief in the trenchancy of Phrase—one man of the world to another.

Your very excellent exposition on the sub- ject of religion pleases me very much. I have seldom seen ideas of orthodoxy so clearly defined.

Hogg and he had 'found to our surprise that (strange as it may appear) the proofs of an existing deity were as far as we had observed, defective.' He was adroit at sidestepping the ensuing parental explosion Cl threw cold water,' he reports to Hogg, 'on the rage of the old buck') and when he ran off with Harriet his first letter home was artfully designed to secure his quarterly allow- te before his father heard of the elopement. itie early letters are those of a diplomatist who ean be all things to all men and women. With Godwin he is manly frankness and sincerity, dis- a,rming the justifiable suspicions of the philan- tnro,..is,

L with a remarkably accurate self-portrait: I know that I am vain, that I assume a character which is perhaps unadapted to the limitedness of my experience, that I am Without the modesty which is so generally con- sidered an indispensable ornament to the in- genuousness of youth.

One must.not over-emphasise the element of ei alculation, but it is surprising to find it at all. :t exists beside the delightfully zany—'My head irs rather dizzy today on account of not taking e's: Rod a slight attack of typhus'—and shrewd 113;freePtions about language—`the word God has eell and will continue to be the source of *THE T Edited ..ETTERS OF PERCY BYSSHE SHELLEY. VOIRnies 7s.) bY Frederick L. Jones. (0.U.P., two , f7

numberless errors until it is erased from the nomenclature of philosophy'—which reveal the Shelley who revered Bacon and would have applauded Professor Ayer. There is also the generous and indignant eyewitness—however odd the metaphor—of the miseries of the Dublin poor: Intemperance and hard labour have reduced them to machines. The oyster that is washed and driven at the mercy of the tides appears to me an animal of almost equal elevation in the scale of intellectual being.

And yet how much did he really see them? We look in vain for anything like Keats's account of an old woman in Belfast—`with a pipe in her mouth and looking out with a round-eyed skinny-lidded inanity'—and for any awareness of what Keats called the 'intellectual countenance' of places and people. We miss, too, the splendid self-centredness of Byron's letters, the note of 'I was not in love, nor have any love left for any; but I could not exactly play the stoic with a woman who had scrambled eight hundred miles to unphilosophise me.' In spite of his claim that 'the contemplation of female excellence is the favourite food of my imagination,' no woman appears before us as clearly in Shelley's letters as does Clair Clairmont in that comment from Byron's.

Only to his sister Hellen do we catch an urgent note of intimacy and secret understand- ing, almost the tone of incest in a Ford play: Everyone near you says that I have behaved very ill, and that I can love no one . . . read this letter when no one sees you and with attention. I have not written to Mary, because I know she is not firm and determined like you.

'Remember Allen,' he writes to his grandfather's huntsman, addressing the envelope in a dis- guised hand with the instruction to put the letter to Hellen secretly in the summer house at Field Place—'I shall not forget you. How is your family going on?' But the huntsman ignored this reminder that Shelley might himself be master one day and turned the letter in to Sir Bysshe.

If we only had her letters, and his to her, we should form a much more vivid and sympathetic portrait of Harriet than of Shelley. When she takes up the pen in their joint correspondence with Miss Hitchener a human being seems in charge once more (`Mrs. Nugent is sitting in the room now and talking to Percy about virtue'). She supported him loyally, though with fits of laughter, over the Irish pamphlets and the renunciation of animal food, but she was soon in trouble and---like many more sensible persons —intolerable in consequence.

The lady I have so often mentioned to you, of the name of Hitchener, has to our very great happiness left us. We were entirely de- ceived in her character as to her republicanism. . .". She built all her hopes on being able to separate me from my dearly beloved Percy and had the artfulness to say that Percy was really in love with her. . . .

In the elegant and well-regulated atmosphere of the Boinville home Shelley perceived the nature of 'the rash and heartless union' he had entered upon. 'Me you may keep as a steadfast and affectionate friend,' he writes to Harriet, 'but I have a certain price.' 'I will be your friend, not in the vulgar sense of friend,' he warns her later, and then in a final spasm of fastidiousness: 'Remember what I am!' Shelley's father would not have married Harriet, but he might have discarded a mistress much as his son did her.

The strange fact that Shelley was highly indig- nant with Hogg for making advances to Harriet and yet positively encouraged him to 'share' Mary (there is some likelihood that he did) shows that Harriet was treated throughout atavistically rather than on theory. Getting rid of her, Shelley implies, purged him of 'grossness.' And yet, was he whistling to keep his courage up when he wrote that 'when I come home to Harriet I am the happiest of the happy'? Hasn't it rather the accent of truth? It is tempting to see in the rejection of her for Italian exile with Mary the end of his last chance to keep his feet on the ground, in his family and in English affairs. From then on his wings were indeed beating the void.

The lifelessness of the later letters certainly suggests this. If the reviewer is disposed to con- centrate shamelessly on the well-trodden path of scandal and upset, of 'chatter about Harriet,' it is because of the difficulty of finding in them more of literary and intellectual interest. From Italy he writes that he is well; that he arranges his day harmoniously; he reads and re- reads the Greek tragedians and poets (he is the only English poet whose language suggests the accent and swiftness of the Greek). But a kind of deadness has set in. He became genuinely anxious to take service in the East India Corri- pany--perhaps as the adviser of some native prince—and implored Peacock to try to arrange it. It was no romantic dream; persons no less odd have shown themselves to be born colonial administrators; he certainly chafed for some such outlet, not, like %Ton, to fulfil his destiny, but for the sake of the work itself. Strange to think of a spare and sunburnt figure doing justice on a verandah, a Rimbaud in Peshawar, but—who knows?—his energy and very real political en- lightenment might have borne impressive fruit.

Dr. Jories's new edition is a model of its kind and beyond all praise. He has had access to manuscripts where Ingpen in his 1926 edition used copies; he has included many previously unpublished letters; and he has been able to correct the correspondence chopped about by Hogg in his Life of Shelley. But even more im- portant than these scholarly offices is the skill and taste with which he has combined Shelley's circle and his day-to-day life into a coherent and detailed narrative, by introducing us bio- graphically to every new correspondent and giving in footnote some of the relevant replies from Hogg, Harriet, Godwin, Peacock and others.

Everyone who writes about Shelley takes up an attitude towards him : occasionally agi- tatedly partisan, like Dowden; more often, like Arnold, dryly censorious. Both are ultimately irrelevant and distracting. Everyone's self-esteem is increased by reading about Shelley and think- ing how much better they manage their own affairs, and from here it is a short step to re- marking—with Arnold and T. S. Eliot—how much better he might have written his poetry. The further assumption is not justified. Perhaps now that we have this edition of the letters, and can read more of Shelley while reading less about him, it will not be made so often.