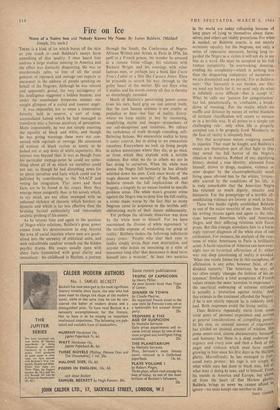 THERE is a kind of ice which burns off the skin as you touch it—and- Baldwin's essays have something of that quality. I once heard him address a large student meeting in America and the effect was distinctly disquieting. He was so murderously calm, so free of all the usual gestures of reproach and outrage one expects to encounter in the address of people speaking on behalf of the Negroes. Although he was relaxed and apparently genial, the very astringency of his intelligence suggested a hidden hauteur, and under the nonchalant temperate manner one caught glimpses of a coiled and nascent anger.

It was Impossible not to sense a tremendous ferocity held in reserve, a sort of long, accumulated hatred which he had managed to transform into a furious accuracy of perception. More impressively, he was not simply asserting the equality of black and white, and though he was giving warnings these were not con- cerned with reprisals or revenge. He countered all notions of black racism as surely as he lashed out at any hints of white superiority. His interest was beyond that. It was as though from his particular vantage-point he could see some- thing about all of us which we ourselves could not see; as though he had disturbing news for us about ourselves and facts which could not be palliated by contributing to the NAACP and voting for integration. That news and those facts are to be found in his essays. Here they emerge more pungently than in his novels which, to my mind, are too often swamped with an unleased violence of rhetoric which borders on hysteria and which is far less effective than the bruising factual authenticity and remorseless analytic probing of his essays.

As he returns time and again to the question of Negro-white relations, Baldwin's great power comes from his determination to step beyond the area of social injustice where men are gener- alised into the unreality of statistical units, and with redoubtable candour wrench out the hidden psychic drama. His essays usually open with sheer facts transmitted with great clarity and immediacy: his childhood in Harlem, a journey

through the South, the Conference of Negro- African Writers and Artists in Paris in 1956, his spell in a French prison, the wonder he aroused in a remote Swiss village, his relations with Richard Wright and his meetings with other famous men, or perhaps just a book like Uncle Tom's Cabin or a film like Carmen Jones. Then he proceeds to scorch his way through to the guilty heart of the matter. fiis eye flays what it studies and his words convey all that is thereby so disturbingly revealed.

Much of Baldwin's penetrating power comes from his sure, hard grip on one central truth; that the root human sickness is not cruelty or prejudice or hate—but fear of reality. Every- where we keep reality at bay by reassuring, simplifying myths and images—projections of our self-deceptions and timidities. We refract the turbulence of truth through consoling, self- flattering fictions. We emasculate reality to keep it under control, but in doing so we emasculate ourselves. Everywhere we lock up living people in airless stereotypes where they die, or go mad, or from which they explode with a terrible violence. But what we do to others we are in fact doing to ourselves. When the white man denies the Negro full humanity he has already whittled down his own. Cash once wrote of 'the tragic descent into unreality' of the South, and Baldwin reveals the full implications of that tragedy, a tragedy by no means limited to specific problem areas. The white man's greatest crime against the Negro was to deny him his full reality, a crime made worse by the fact that so many Negroes came to acquiesce in the terrible self- obliterating myth of their innate subhumanity.

Yet perhaps the ultimate disservice was done by the white man to himself. For we have maintained the illusion of white supremacy 'at the terrible expense of weakening our grasp of reality.' Baldwin makes the following indictment many times: 'People who shut their eyes to reality simply invite their own destruction, and anyone who insists on remaining in a state of innocence long after that innocence is dead turns himself into a monster.' At least two societies in the world are today collapsing because of

long years of lying to themselves about them- selves, and others are visibly precarious. For what is needed, so Baldwin asserts, is not merely economic equality for the Negroes, not only a '

series of reparative measures; having long re- garded the Negro as a victim it will not do to see him as a_ ward. He must be accepted in his full human complexity. 'In overlooking, denying, evading his complexity—which is nothing less I.

than the disquieting complexity of ourselves— we are diminished and we perish.' For as Baldwin says: 'Our humanity is our burden, our life; we need not battle for it; we need only do what is infinitely more difficult—that is accept it.'

What he calls our 'passion for categorisation' has led, paradoxically, to 'confusion, a break- down of meaning.' For the reality which we muffle and distance by means of verbal blankets of intricate classification will return to menace us in a terrible way. It all points to a simple yet challenging rule: only when life is properly accepted can it be properly lived. Mendacity in the face of reality is utimately fatal.

Not that acceptance means resigning oneself to injustice. That must be fought, and Baldwin's essays are themselves part of that fight in that they reveal the full horror of the Negro's situation in America. Robbed of any dignifying history, denied a true identity; alienated from himself, driven to drugs, madness, violence or utter despair by the claustrophobically small living space allowed him by the whites, 'irrepar- ably scarred by the conditions of his life,' it is truly remarkable that the American Negro has retained so much dignity, .tenacity and humanity. For the promptings of a terrible all- annihilating violence are forever at work in him. These two books rightly established Baldwin as one of the major essayists of our time. Mostly his writing returns again and again to the rela- tions between American white and American Negro, and their differing relations with Euro- peans. But this triangle stimulates him to a burn- ingly relevant diagnosis of the white state of our civilisation. For instance,, his analysis of the reac- tions of white Americans to Paris is brilliantly acute. A facile rejection of America can turn over- night into an hysterical affirmation of it: either way any deep questioning of reality is avoided.

'What one vainly listens for in this cacophony of affirmation is any echo, however faint, of in- dividual maturity.' The American, he says, all too often simply 'changes the fashion of his in- nocence.' Similarly a total acceptance of French values reveals the same 'aversion to experience': the uncritical embracing of extreme attitudes is actually. a 'protection against reality.' And this extends to the treatment afforded the Negro: if he is not utterly rejected he is suddenly idol- ised. Both responses avoid the living reality.

Thus Baldwin repeatedly starts from some vivid piece of personal experience and arrives at general considerations of compelling power.

In his case, an unusual amount of experience has yielded an unusual amount of wisdom. His prose seems cool, almost documentary, balanced and humane; but there is a deep undertow Of urgency and every now and then a flash of the anger and violence which must have started

growing in him since his first days in the Harlan ghetto. Marvellously, he has managed to tran-

scend mere protest : his rage is not simply at what white man has done to black man, but at what man is doing to man, and to himself. Frost

his travels in America and Europe, but above all from the heart of that Harlem ghetto, Baldwin brings us news we cannot afford to ignore—we must accept one another or die.