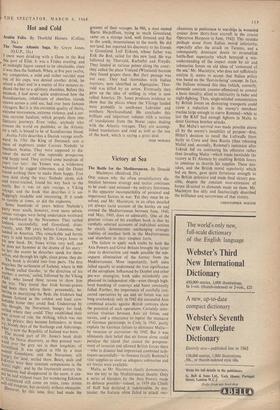 I ONCE went drinking with a Dane in the Red Sea port of Eilat. It was a Friday evening, and at midnight liquor ceased to be obtainable, since it was then the Sabbath. When, at five past twelve, my companion, a mild and rather suicidal man out of his cups, was denied another drink, he seized a chair and in a matter of five minutes re- duced the bar to a splintery shambles. Before this Incident, I had never quite understood how the Scandinavians, inhabitants of cheerless islands strewn across a cold sea, had ever been famous voyagers. But it is this extremist quality of theirs, extreme moroseness, extreme violence, and a cer- tain extreme fatalism, which propels them into fantastic journeys. Even today, anybody who crosses the world on pushbike, or the Atlantic on a raft, is bound to be of Scandinavian blood.

Arabia Felix describes a Danish voyage south- ward. In 1761 the King of Denmark sent a team of explorers under Carsten Niebuhr to Southern Arabia. They were supposed to dis- cover the secret of that reputedly prosperous and happy land. They arrived some hundreds of Years too late: the Yemen was a wilderness Wandered by ragged tribesmen, and the Danes found nothing there to make them happy. Five filen died along the way; Niebuhr alone, sick and travel-stained, found his way back to the north. But it was an epic voyage, a Viking voyage, and the book that describes it is un- flaggingly readable and interesting. if it tends to ramble at times, so did the explorers.

Some hundreds of years before Niebuhr's Party went south, however, even more adven- turous voyages were being undertaken westward and northward by the Norsemen. They settled Iceland, successfully, and Greenland, disas- trously, and, 500 years before Columbus, they landed in America. This remarkable and heroic story is told beautifully by Dr. Gwyn Jones in his new book. Dr. Jones writes very well, and• he does not hammer at the drama of his story: he lets the events he describes speak for them- selves, and through his tight, clean prose, they do.

The book is divided into four parts. The first

describes the settlement of Iceland, where in 860 a Swede called Gardar, 'at the direction of his TOther, a seeress,' sailed, followed by the Viking tioki, who loosed three ravens to show him

way. They found that Irish hermit-priests .41.ad been there before them: presumably, be- lieving in mortifying the flesh, the Irishmen had F.hosen Iceland as the coldest and least corn- home they could find. Undeterred by

'sins thought, the Norsemen, hungry for land, oettled where they could. They established their bwn system' of rule, the Althing, which was run :Y the priests; they became Icelanders; in those LeF, bloody days of the Sturlungs and Asbirnings, wa_at is now the Republic of Iceland was born. t.he second part of Dr. Jones's book deals Ward the Norse discovery, as they pressed west- ,„%rd over the grey sea in their longships, of eenland. It was sighted in 930 by a man taunted Gunnbjorn, and the Norsemen, still

hgry for land, settled there. Bears, seals and sko s were their constant companions in the

ictleini night: and by the fourteenth century the settlements had disappeared in the snow, it can- in be said without trace, for wandering Eskimos n Greenland still come on ruins, runic stones and old we

apons, but certainly without obsequies.

'Weyer, by this time, they had made the

greatest of their voyages. In 986, a man named Bjarni Herjolffson, trying to reach Greenland, came on a strange land, well forested and flat to the south, mountainous to the north. He did not land, but reported his discovery to his friends in Greenland. Leif Erikson, whose father was Erik the Red, sailed for this new land. He was followed by Thorvald, Karlsefni and Freydis. They landed at various points along the coast: they called the place Vinland (Wineland) because they found grapes there. But their passage was not easy. They had skirmishes with Indian warriors, now identified as Algonquins; Thor- vald was killed by an arrow. Eventually they gave up the idea of settling in what is now called America. Dr. Jones produces evidence to show that the places where the Vikings landed were probably in south-east Labrador and northern Newfoundland. He concludes this brilliant and important volume with a section of translations from the Norse sagas dealing with the Atlantic voyages. They are accomp- lished translations and read as well as the rest of the book, which is saying a great deal.