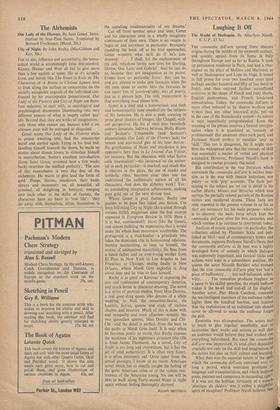 FOR its size, influence and accessibility, the homo- sexual world is astonishingly little documented. Kinsey, Hauser and West all fail to give more than a few squints at queer life as it's actually lived, and novels like The Heart in Exile or The Charioteer or A Room in Chelsea Square tend to frisk along the surface or concentrate on the socially acceptable anguish of the individual con- fronted by his unacceptable temperament. Our Lady of the Flowers and City of Night are there- fore welcome, to start with, as sociological and psychological documents illuminating two very different aspects of what is ineptly called `gay' life. Beyond that, they are works of imagination: only those who cannot say huntani nihil a me aliertum puto will be outraged or disgusted.

Genet wrote Our Lady of the Flowers while in prison awaiting trial, had the manuscript burnt and started again. Lying in his foul bed, fondling himself beneath the sheets, he made up stories about dream lovers to stimulate himself to masturbation. Sartre's excellent introduction (from Saint Genet, reviewed here a few weeks back) describes the method perfectly: 'The aim of this masturbator is very like that of the alchemists. He wants to give lead the form of gold.' Pimps, thieves, murderers, their hards always and immensely on, all beautiful, all criminal, all delighting in betrayal, merging into each other in the drifts of fantasy, the characters have no basis in 'real life': `they do away with themselves, dilute themselves in the appalling insubstantiality of my dreams.' Cut off from normal space and time, Genet and his characters exist in a wholly imaginary continuum of their own. There is no reason to begin or end anywhere in particular. Brusquely rounding the book off as his trial approaches, Genet wonders what he'll do if he's con- demned: `. . . I shall, for the enchantment of my cell, refashion lovely new lives for Darling, Divine, Our Lady and Gabriel.' And he can do so, because they are imagination at its purest. Events have no particular form: they can be, and are, altered to make new fantasies when the old ones cease to excite. Into the fantasies he can inject bits of autobiography, bits of poetry, just as it pleases him. The only requirement is that everything must please him.

Genet is a thief and a homosexual, and theft and homosexuality (and murder) are the subjects of his fantasies. He is also a poet, creating in prose great clusters of images, like Chagall, with- out perspective. He fits at once into twentieth- century literature, halfway between Molly Bloom and Beckett's Unnamable (and Sarraute's • planetarium). Our Lady of the Flowers lacks the venom and anti-social glee of his later fiction: the glorification of Nazis and murderers is less oppressive here than in Le Journal d'un Voleur, for instance. But the obsession with what Sartre calls 'essentialism'—the insistence on the univer- sal in each particular—is marked, and much that is obscure in the plays, the use of masks and symbolic roles, becomes clear once one has understood the emblematic nature of all his characters. And does the alchemy work? Yes: an astonishing imaginative achievement, making ' pure gold out of the very dirtiest lead.

Where Genet is pure fantasy, Rechy one guesses to be pure fact tidied into fiction. I've been following City of Night like a serial through various littlish magazines since the first excerpt appeared in Evergreen Review in 1958. Here it is at last, commendably uncut (like the Genet),_ and almost fulfilling the expectation that it would make the whole Beat movement worthwhile. The protagonist is a stud-hustler—a prostitute who takes the dominant role in homosexual relations, thereby maintaining, at least to himself, the notion of unimpaired masculinity. He flees from a hated father and an over-loving mother from El Paso to New York to Los Angeles to San Francisco to Chicago, ending finally in New Orleans, where Mardi Gras explodes in drag about him and he tries to face himself.

Rechy is as good as Kerouac at capturing the size and restlessness of contemporary America, and much better at character-drawing. The novel is a series of portrait-studies, from Miss Destiny, a real gone drag queen Who dreams of a white wedding, to Neil, the masochist-fascist, via hustlers, fairies, queens and studs of various charms and beauties. Much of this is done with real sympathy and even affection—notably the two queenliest queens, Miss Destiny and Chi- Chi—and the detail is perfect, from the bars to the parks to Mardi Gras itself. It is only when he becomes poetic or moral that Rechy exposes the weakness of his nightmare structure (the title is from James Thomson). As a novel, City of Night is too long and overwritten, but it has the air of total authenticity. It is often very funny, it is often extremely. sad. Quite apart from the sexual passages, I know of no recent American novel which has so exactly caught the feeling of the great American cities or of the violent rest- lessness of the American young. No one will be able to walk along Forty-second Street at night again without feeling thoroughly alarmed.