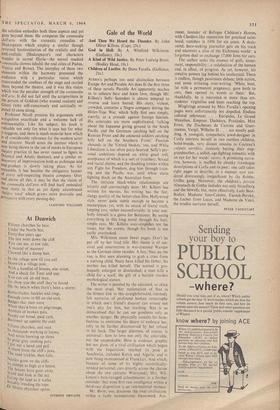 Gale of the World

God in Hell. By A. Winifred Wilkinson. (Gollancz, 18s.) AUDEN'S perhaps too neat distinction between Escape Art and Parable Art does fit the first three of these novels. Parable Art apparently teaches us to unlearn hate and learn love, though Mr: Killens's Solly Saunders is almost tempted to reverse and learn hatred. His story, violent, crowded, concerns a Negro company during the Hitler-Tojo War, which Solly first sees simply, starrily, as a crusade against foreign fascism. His comrades are more sophisticated, 'talking about the Japanese giving ground in the South Pacific and the Germans catching hell on the Russian Front and the coloured soldiers catching holy hell on the Southern Front.' Fascism abounds in the 'United Snakes,' too, and White Liberalism is too often putty-hearted. Solly's per- sonal ambitions depend on white good will, acceptance of which is a sort of treachery. Sexual. and racial claims, and the thudding ironies within any Fight for Freedom, dog him through train- ing and the Pacific war, until white starts fighting black on the Australian front.

The intricate black-white relationships are bitterly and convincingly done. Mr. Killens has written for movies, his writing has the fast, slangy quality of the better-class film, Hollywood style, never quite subtle enough to become a masterpiece, yet, with its smack of literal truth, keeping you, rather uncomfortably, in your seat. Solly himself is a glove for Belafonte. By seeing .everything in this long novel through his hurt, simple eyes, Mr. Killens over-simplifies not the issues, but the events, though his book is not easily overlooked.

Mrs. Wilkinson needs fewer pages. Don't be put off by her tired title. Her theme is of sur- vival and resurrection in war-cratered Warsaw as the German slime recedes. A boy, Stas, on the run, is first seen planning to grab a crust from a starving child. Nazis have killed his father, his mother has killed herself. The normal is gro- tesquely enlarged or diminished; a man kills a child for a scarf, the gift of a hairpin reaches mythological stature.

The writer is puzzled by the educated, so often the most cruel. Her reclamation of Stas is the firmest link in this straightforward,.intensely felt narrative of profound human catastrophe in which one's friend's disaster can arouse not one's pity for him, but loathing. Stas is so demoralised that he can see goodness only as another danger. He physically assaults his bene- factress to overcome his desire to embrace her, only to be further disconcerted by her refusal to hit back. The larger dilemma, of course, is universal; how to love not only the unlovable, but the unspeakable. Here is evidence, graphic but not glum, of a rival civilisation which began with the Inquisition, reached its peak at Auschwitz, included Katyn and Algeria, and is now being re-examined at Frankfurt. And which, because of some of its highly scientifically- minded personnel, cuts directly across the chatter about the two dtiltures. Wiersynski, Mrs. Wil- kinson's hate-ravaged schoolmaster, is a further reminder that even first-rate intelligence within a third-rate disposition is an international menace.

Mr. Brent, too, discusses the rival civilisation, within a fairly conventional framework. For-

rester, founder of Refugee Children's Homes, with Cheshire-like reputation for practical saint- hood, vanishes in 1956 for six years. A desic- cated, hero-seeking journalist gets on his track and uncovers a slice of the Eichmann world: a forgotten deal to exchange 17,000 Jews for cars.

The author seeks- the essence of guilt, atone- ment, responsibility: a redefinition of the human and, in effect, of progress. As yet, however, his creative powers lag behind his intellectual. There is endless, though passionate debate; little action, and some irritating over-writing. 'White boat, fat with a permanent pregnancy, gave birth to cars, then opened its womb to them.' But, thankfully, he is interested in more than art- students' virginities and louts reaching the top.