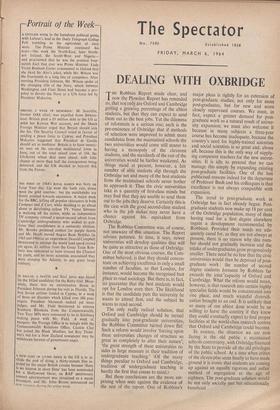 —Portrait of the Week— A LIVELIER WEEK in the humdrum

political game, with Labour's lead in the Daily Telegraph Gallup Poll tumbling to the equivalent of sixty seats. The Prime Minister continued his tours—this week the North-East, later North- ern Ireland, the South-West and Nigeria— and proclaimed that he was the prettiest four- teenth Earl that ever was Prime Minister. Lady Violet Bonham Carter commented in Oxford that she liked Sir Alec's joke, while Mr. Wilson was the fourteenth in a long line of computers. After meeting President Johnson, Mr. Wilson spoke of the changing role of the Navy, which between Washington and Fleet Street had become a pro- pasal to devote the Navy to a UN force led by President Makarios.

former OAS chief, was expelled from Switzer- land, Britain paid a £9 million debt to the US to settle her Korean War account, and the Dutch Foreign Minister urged that Britain should join the Six. The Security Council voted in favour of sending a peace force to Cyprus, and President Makarios suggested that President de Gaulle should act as mediator. Britain is to have twenty- six men on the one-ship multilateral force in June, out of the total mixed crew of 334, the US-Soviet wheat deal went ahead, with little chance of more than half the consignment being delivered, and the UK decided to boycott fish from the Faroes.

TnE FIRST OF I964's ROYAL BABIES was born on Leap Year day. Up went the bank rate, down went the gold reserves: but the matchsticks are firmly pointed towards expansion. A major week for the BBC, killing off popular characters in both Compact and Z Cars, while deciding to go ahead alone in developing colour TV. Victor Silvester is waltzing off the screen, while an independent TV company refused a seven-second advert from Cambridge undergraduates who wished to pub- licise their candidature in a university election. Mr. Brooke promised control for purple hearts and Mr. Heath moved August Bank Holiday (in 1965 and 1966)as an experiment. Donald Campbell threatened to attempt the world land speed record yet again, Ll million from the Great Train Rob- bery was rumoured to have crossed the Channel by yacht, and no more scientists announced they were crossing the Atlantic in any great brain robbery.

IN DALLAS, a twelfth and final juror was found (in the 162nd candidate) for the Ruby trial. Mean- while, there was an assassination threat to President Johnson during his visit to Florida. The first Soviet airliner landed in Cyprus, in a week of three air disasters which killed over 180 pass- engers. President Nkrumah sacked yet more judges, and Mr. Field threatened to remove Southern Rhodesia from the Commonwealth. Two Tory MPs were rumoured to be in Salisbury making peace with Mr. Field. A week of mergers: the Foreign Office is to mingle with the Commonwealth Relations Office, Cassius Clay has joined the Black Muslims, but Roy Thom- son's bid for a New Zealand newspaper may be Withdrawn because of government anger.

A NEW COST OF LIVING INDEX in the US is to in- clude the cost of 'dying, a thirty-minute film re- jected by the major British circuits because 'there IS no interest in short films' has been nominated for a Hollywood Oscar, an RAF anniversary concert advertisement was circulated as a secret document, and Mr. John Bloom announced no