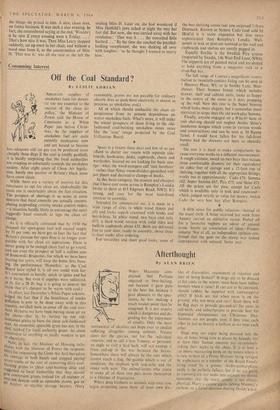 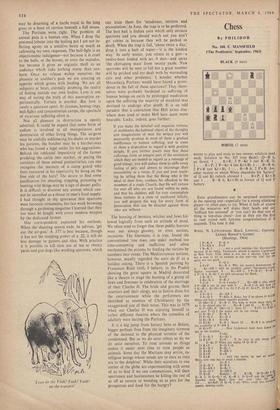 Where does kindness to animals stop once you begin projecting upon them all your own dis- like of discomfort, resentment of injustice and fear of being hunted? If dogs. are to be dressed in fur coats in the winter, must hens have rubber bootees when it rains? If cats are to be castrated, should rabbits be supplied with contraceptive pills? If birds are fed when snow is on the ground, why not mice and rats? Soon' there will be flag days to provide gas-and-air for cows itt calf-birth, and subscriptions to provide beer for depressed chimpanzees on Christmas Day. Animals are not people, even if they treat each other in just as beastly a fashion as we treat each other.

Stags may not enjoy being pursued into the sea, or foxes being torn to pieces by hounds, but at least their human enemies are occasionally risking their necks in the chase. It is at least a cut abo ■ 12 massacring birds on the moors where ii is rare to hear of a Prime Minister being savaged by a•pheasant or a member of the Royal Family being treed by a grouse. Anthropomorphism really is the pathetic fallacy, but if we are going to transmigrate our souls into animals we should remember that the worst cruelty is not alway, physical. Many a canine gigolo licking Mumm■'s earhole. or a feline mistress sharing Doddy's bed,

may be dreaming of a battle royal in the long grass or a feast of carrion beneath a full moon.

The Puritans were right. The problem of animal pain is a human one. When I drop the pinioned lobster into the boiling pot I am not in- flicting agony on a sensitive brute so much as callousing my own responses. The bull-fight is an objectionable indulgence—not because it is cruel to the bulls, or the horses, or even the matador, but because it gives an orgiastic thrill to 'an audience which risks nothing worse than sun- burn. Once we release within ourselves the pleasure in another's pain we are creating an appetite which grows with feeding. We are all solipsists at heart, eternally doubting the reality of feeling outside our own bodies. Love is one way of testing the truth of this assumption ex- perimentally. Torture is another. But love is rarely a spectator sport. At circuses, boxing rings, bull-fights and concentration camps, the spectacle of vicarious suffering often is.

Not all pleasure in destruction is openly admitted. It could be argued that some form of sadism is involved in all manipulation and domination of other living things. The surgeon may be usefully sublimating his desire to murder his patients, the butcher may be a hatchet-man who has found a legal outlet for his aggressions. Behind the rubicund impassivity of the farmer prodding the cattle into market, or pacing the corridors of those animal penitentiaries, can one recognise the instincts of a camp guard who feels reassured in his superiority by being on the free side of the bars? The desire to find some justification for shooting, trapping, poisoning or hunting wild things may be a sign of deeper guilts. It is difficult to discover any animal which can- not be identified as a threat to man's food supply.

I had thought in my ignorance that sparrows were innocent ornaments, but last week browsing through a gardening magazine I learned that they too must be fought with every modern weapon by the dedicated farmer.

One correspondent explained his methods. When the shooting season ends, he advises, 'get out the air-gun.' A .177 is best because, though it has not the stopping power of a .22, it will do less damage to gutters and tiles. With practice it is possible to kill nine out of ten at twenty yards and gun dogs like working sparrows, which

'I can do the. Yeah! Yeah! Yeah! on the trumpet.' can train them for 'steadiness, retrieve and presentation.' In June, the trap is to be preferred. The best bait is Indian corn which only attracts sparrows and you should watch out you don't get robins in because they will be pecked to death. When the trap is full, 'about twice a day,' drop it into a butt of water—It is the kindest way.' In early winter, you return to a gun—a twelve-bore loaded with no. 9 shot—and spray 'the chirruping mass' from twenty yards. 'Few sparrows will be seen to fall but a great number will be pricked and are dealt with by marauding cats and other predators.' I. wonder whether Macaulay'ls Puritans would have found a provi- dence in the fall of those sparrows? They them- selves were probably hardened to suffering of human beings on earth by prolonged meditation upon the suffering the majority of mankind was destined to undergo after death. It is an odd paradox that a conviction that Hell exists else- where does tend to make Hell here seem more bearable. Lecky, indeed, goes further: If you make the detailed and exquisite tortures of multitudes the habitual object of the thoughts and imaginations of men (he writes) you will necessarily produce in most of them a gradual indifference to human suffering, and in some of them a disposition to regard it with positive delight. If you further assure men that these sufferings form an integral part of the revelation which they are bound to regard as a message of good tidings, you will induce them to stifle every feeling of pity, and almost to encourage their insensibility as a virtue. If you end your teach- ing by telling them that the Being who is the ideal of their lives, confines his affection to the members of a single Church, that He will torture for ever all who are not found within its pale, and that his children will for ever contemplate these tortures in a state of unalloyed felicity, you will prepare the way for every form of persecution that can be directed against those who are without.

The burning of heretics, witches and Jews fol- lowed logically from such an attitude of mind. We often tend to forget that these public horrors were not always gloomy, or even serious, occasions. The Germans, it is true, found the conventional 'one man, one stake' method too time-consuming and inefficient and often mechanised the process by feeding the victims by numbers into ovens. The Mediterranean nations, however, usually regarded the auto da fe as a holiday outing. There is a Spanish painting by Francesco Rizzi (still, I believe, in the Prado) showing the great square in Madrid decorated like a theatre to stage the burning of a group of Jews and Jewesses in celebration of the marriage of their Charles H. The bride and groom, their courtiers and their clergy, are in festive dress for the entertainment while the performers are identified as enemies of Christianity by the exaggerated size of their noses. This was in 1679 when our Charles II was enjoying himself in rather different theatres where the comedies of adultery were baiting the Puritans.

It is a big jump from battery hens to Belsen, bigger perhaps 'than from the imaginary torment of the damned to the physical torment of the condemned. But as we do unto others so do we do unto ourselves. To treat animals as things makes it easier next time to treat people as animals. Some day the Martians may arrive, in- telligent beings whose minds are to ours as ours are to the dolphins'. While their scientists in one corner of the globe are experimenting with some of us to find if we can communicate, will their sportsmen and businessmen be killing the rest of us off as vermin or breeding us as pets for the prosperous and food for the hungry?