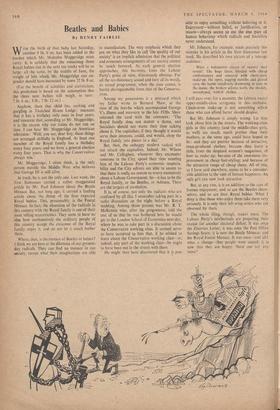 Wtits the birth of that baby last Saturday, another 9 lb. 6 oz. has been added to the burden which Mr. Malcolm Muggeridge must carry. It is unlikely that the remaining three Royal babies due in the next ten weeks will be so large: all the same, by the middle of June, the weight of bile which Mr. Muggeridge can en- gender should have increased by some 32 lb. 8 oz.

(For the benefit of scientists and statisticians, this prediction is based on the assumption that the three next babies will weigh, in turn: 7 lb. 6 oz.; 8 lb.; 7 lb. 12 oz.)

Anyhow, there that child lies, sucking and gurgling in Thatched House Lodge: innocent that it has a birthday only once in *four years, and innocent that, according to Mr. Muggeridge, it is the reason why our trains do not run on time. I can hear Mr. Muggeridge on American television: 'Well, you sec, dear boy, these things are arranged skilfully in England. At least one member of the Royal family has a birthday every four years; and we have a general election every four years. That is why the Conservatives always win.'

Mr. Muggcridge, I often think, is the only person outside the Middle West who believes that George Ill is still alive.

In truth, he is not the only one. Last week, the New Statesman carried a rather exaggerated article by Mr. Paul Johnson about the Beatle Menace. But, not long ago, it carried a leading article about the threat of the four expected Royal babies. This, presumably, is the Foetal Menace. In fact, the obsession of the radicals in this country with the Royal family is one of their most telling eccentricities. They seem to have no idea how unobsessively the ordinary people of this country accept the existence of the Royal family, enjoy it, and do not let it much bother them.

Where, then, is the menace of Beatles or babies?

think we are here at the dilemma of our present- day radicals. They can find no menace in our society, except what their imaginations are able to manufacture. The very emphasis which they put on what they like to call 'the quality of our society' is an implicit admission that the political and economic arrangements of our society cannot be. much bettered. As each general election approaches, this becomes, from the Labour Party's point of view, disastrously obvious. For all the revolutionary sound and fury of its words, its actual programme, when the time conies, is barely distinguishable from that of the Conserva- tives.

Among my possessions is a postcard which my father wrote to Bernard Shaw, at the time of the boo-ha which accompanied George V's illness and recovery in the late 1920s. Shaw returned the card with the comment: The Royal family does not matter a damn, and Socialists should not waste their time talking about it. The capitalists, if they thought it would serve their interests, could, and would, chop the Royal family into pieces in a day.'

But, then, the unhappy modern radical will not attack the capitalists. Indeed, Mr. Wilson and Mr. Callaghan, whenever they encounter someone in the City, spend their time assuring him of the Labour Party's economic respecta- bility and the City editors are able to assure us that there is really no reason to worry excessively about a Labour Government. So—it has to be the Royal family, or the Beatles, or Admass. These are the targets of revolution.

It is, of course, not only the radicals who are confused by all this. I remember taking part in a radio discussion on the night before a Royal wedding. Among those present was Mr. R. T. McKenzie who, after the programme, told the rest of us that he was bothered how he would get to the London School of Economics next day, where be was to take part in a discussion about the Conservative working class. It seemed never to have occurred to him that, if he wished to learn about the Conservative working class—or, indeed, any part of the working class—he ought to have been out in the streets with them.

He might then have discovered that it is pos- sible to enjoy something without believing in it. Enjoyment—without belief, or justification, or reason—always seems to me the one part of human behaviour which radicals and Socialists never understand.

Mr. Johnson, for example, made precisely this mistake in his article in the New Statesman last week. He described his own picture of a teenage audience : What a bottomless chasm of vacuity they reveal! The huge faces, bloated with cheap confectionery and smeared with chuin-store make-up, the open, sagging mouths and glazed eyes, the hands mindlessly drumming in tune to the music, the broken stiletto heels, the shoddy, stereotyped, `with-it' clothes....

I will pass over, for a moment, the (almost nasty) upper-middle-class arrogance in this outburst. Chain-store make-up is not something which those who can afford better should despise.

But Mr. Johnson is simply wrong. Let him look about him in the streets. The working-class girls in this country (and the middle-class girls, as well) are much, much prettier than their mothers, at the same age, could have hoped to be: and they arc prettier because of attractive, mass-produced clothes; because they learn a little, from the despised women's magazines, of how to make up; because of the enormous im- provement in cheap hair-styling; and because of the attractive range of cheap shoes. All of this, as I have said elsewhere, seems to be a consider- able addition to the sum of human happiness. An ugly girl can now look attractive.

But, at any rate, it is an addition to the sum of human enjoyment; and so are the Beatles them- selves; and so are four Royal babies. What I deny is that those who enjoy them take them very seriously. It is only their left-wing critics who are obsessed by them.

The whole thing, though, makes sense. The Labour Party's intellectuals are preparing their excuse for another electoral defeat. It was once the Zinoviev Letter; it was once the Post .0111ce Savings Scare; it is now the Beatle Menace; and the Royal Foetal Menace. It was once--and oh!. what a change—that people were scared; it is now that they are happy. Need one say any more?