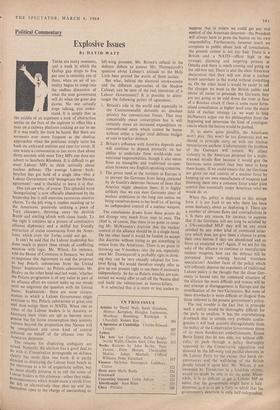 THERE are many moments, and a week in which the Gallup gap drops to five per cent is certainly one of them, when an air of un- reality begins to creep into the endless discussion of what the next government will do when the great day dawns. No one actually stops talking, you under- stand. It is simply that in the middle of an argument a look of abstraction settles on the face of the aspirant to office like a man on a railway platform cocking an ear to see if it was really the train he heard. But there are moments ever more frequent as the election approaches when the politician simply turns his back on awkward realities and runs for cover. If one wants a conversation to last more than about thirty seconds with most Tory MPs one does not advert to Southern Rhodesia. It is difficult to get most Labour MPs to think seriously about nuclear defence. The average Labour back- bencher has got hold of a single idea—that a Labour Government will `denegotiate the Nassau agreement'—and is thankful to leave it at that.

One can see why, of course. This splendid word `denegotiating' is now officially abandoned by the leadership but it still exercises enormous emotive charm. To the left wing it implies standing up to the Americans, positively undoing a piece of Tory chicanery, throwing away the devilish Bomb and starting afresh with clean hands. To the right it conjures up a picture of constructive alliance diplomacy and a skilful but friendly extraction of status concessions from the Amer- icans which even the Tories could not get. It can't be said that the Labour leadership has done much to pierce these clouds of conflicting emotion with logic. Mr. Wilson, for instance, told the House of Commons in January, 'we shall re-negotiate this Agreement to end the proposal to buy Polaris submarines from the United States.' Implication: no Polaris submarines, Mr. Healey on the other hand said last week, 'whether the Polaris programme is of any value as part of an alliance effort we cannot make up our minds until we negotiate the question with the United States.' Implication : there are some circum- stances in which a Labour Government might continue to b'uy Polaris submarines at great cost and then assign them to NATO. When one or Other of the Labour leaders is in America or Germany their views are apt to become more precise but for home consumption they scarcely venture beyond the proposition that Nassau will be renegotiated and some kind of control achieved on behalf of the alliance over the American deterrent.

The reasons for displaying ambiguity are mixed. Naturally the election has a good deal to do with it. Conservative propaganda on defence clearly has more than one form. It is partly directed to displaying the Labour front bench to ,he electorate as a lot of unpatriotic softies, but !ls more deadly purpose is to rub the noses of Labour leaders in this dilemma—either they make pthronouncements which would cause a revolt from left or alternatively they shut up and lay theemselves open to the charge of succumbing to left-wing pressure. Mr. Brown's refusal in the defence debate to answer Mr. Thorneycroft's question about Labour's attitude to the Holy Loch base proved the worth of these tactics. But what, behind the electoral smoke-screen and the different approaches of the Shadow Cabinet, can be seen of the real intentions of a Labour Government? It is possible to disen- tangle the following points of agreement: I. Britain's role in the world and especially in the Commonwealth demands an absolute priority for conventional forces. This may conceivably mean conscription but it will certainly mean an increased expenditure on conventional arms which cannot be borne without either a larger total defence budget- or cuts in nuclear defence.

2. Britain's influence with America depends and will continue to depend primarily on her ability to undertake these world-wide con- ventional responsibilities, though it also stems from an intangible and traditional co-oper- ation between two English-speaking countries.

3. The prime need at the moment in Europe is to prevent the Germans from being attracted by de Gaulle's deterrent because of fears that America might abandon them. It is highly unlikely that we can steer Germany clear of nuclear ambitions in the long run unless we bring ourselves down to her level i.e. of having no independent control of a nuclear weapon.

The conclusions drawn from these points do not diverge very much from man to man. The chief is, of course, that there is no point in resist- ing Mr. McNamara's doctrine that the nuclear control of the alliance should be in a single hand. On the other hand it would be foolish to accept this doctrine without trying to get something in return from the Americans. There is no point in throwing our V-bombers into the sea, especially since Mr. Thorneycroft is probably right in think- ing they can be very cheaply adapted for low- level flying. We would therefore simply offer to give up our present right to use them if necessary independently. So far as Polaris missiles are con- cerned we would offer to call off the Nassau deal and build the submarines as hunter-killers.

It is admitted that it is more or less useless to suppose that in return we could get any real control of the American deterrent—the President will always have to press the button on his own responsibility. Furthermore, however much we complain in public about lack of consultation, the present system is not too bad. There is a British—and a NATO—officer high in the strategic planning and targeting process at Omaha and there is much coming and going on the old-boy net. There is also the clear American declaration that they will not drop a nuclear bomb anywhere in the world without consulting us. On the other hand it would be easier to sell the changes we want to the British public and above all easier to persuade the Germans they are not going to be sold down the river in face of a Russian attack if there is some more form- alised consultation at higher level over the entire field of nuclear strategy i.e. we want to help McNamara argue out his philosophies from the beginning and determine the kind of contingen- cies in which the button would be pushed.

If, as seems quite possible, the Americans won't play, this won't be too disastrous and we should in principle carry on with our nuclear renunciation anyhow. Unfortunately the problem of the Germans will remain. We object violently to the American proposal for a multi- manned missile fleet because it would give the Germans more control than they need to keep them happy. If we could ensure that the Germans are given no real control of a nuclear force by keeping up our own manufacture of weapons and throwing them into a common force under joint control (but essentially under American veto) we would do so.

When this policy is deployed in this abrupt form it is not hard to see why there has been some hesitancy about so deploying it. There are a number of obvious flaws and contradictions in it. Is there any reason, for instance, to suppose that if the Germans will not long be satisfied by a US-controlled MLF they will be any more satisfied by any other kind of command struc- ture which does not give them a chance to press their own button if they are abandoned and so force an escalated war? Again, if we are for the sake of the alliance to continue to manufacture nuclear weapons, how can the defence bill be prevented from soaring beyond mundane speculation? Another facet of the policy which will infinitely depress the exponents of traditional Labour policy is the thought that the closer Ger- many is bound into the command structure of the alliance the more difficult and remote will be any attempt at disengagement in Europe and the reunification of the two 'Germanies. But none of these drawbacks is more difficult or illogical than those inherent in the present government's policy.

The real trouble is the fact that in principle such a policy would be thoroughly difficult for the party to swallow. It has the overwhelming drawback that in certain very probable contin- gencies it will look scarcely distinguishable from the policy of the Conservative Government shorn of its more flamboyant embellishments. Ernest Bevin found that he was able, not without diffi- culty, to push through a policy thoroughly approved by the Conservative opposition and detested by the left-wing and pacifist elements in the Labour Party by the excuse that harsh cir- cumstances and the well-being of the British People forced it upon him. Mr. Wilson, if not swamped by Trotskyites in a landslide victory, would no doubt be able to do the same. Mean- while, it is as difficult to get a Labour MP to admit that his government might have a half- deterrent as it is to get a Tory to admit that his government's deterrent is only half-independent.