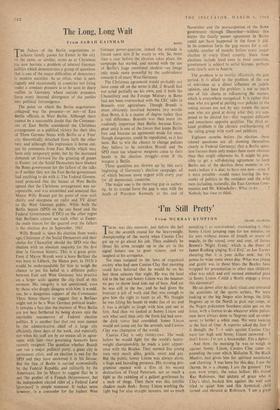 THE failure of the Berlin negotiations to achieve family passes for Easter in the city on the same, or similar, terms as at Christmas has now become a problem of internal German politics which demonstrates a group of questions that is one of the major difficulties of democracy in modern societies. As so often, what is seen vaguely and occasionally in countries not living under a constant pressure is to be seen in sharp outline in Germany where outside pressures force every internal divergence of the parties into political intransigence.

The point on which the Berlin negotiations collapsed was the presence—or not—of East Berlin officials in West Berlin. Although there cannot be a reasonable doubt that the Commun- ists of East Berlin considered the Christmas arrangement as a political victory for their idea of Three German States with Berlin as a 'Free' city theoretically detached from both the other two; and although this impression is borne out, not by comments from East Berlin which may have only temporary point, but by the increased demands set forward for the granting of passes at Easter; yet the Social Democrats have blamed the Bonn government for the failure of the talks as if neither they nor the East Berlin government had anything to do with it. The Federal Govern- ment protested that the Senate of West Berlin agreed that the Christmas arrangement was un- repeatable, and was astonished and annoyed that Mayor Willy Brandt put his point of view with clarity and sharpness on radio and TV direct to the West German public. While both the Berlin Senate (SPD) on the one band and the Federal Government (CDU) on the other regret that Berliners cannot see each other at Easter, the main reason for the quarrel over the failure is the election due in September, 1965.

Willy Brandt is, since his election three weeks

ago, Chairman of the Social Democrats and their choice for Chancellor should the SPD win that election with an absolute majority for the first time in German history. This is a great prize. Even if Mayor Brandt were a born Berliner (he was born in Ltibeck, the Hansa port, in 1913) it would be understandable for him to weigh the chance to put his belief in a different policy between East and West Germany into practice on a larger scale against the city itself at this moment. His integrity is not questioned, even by those who deeply disagree with him; it would, too, be a dangerous support of the Communist Three States theory to suggest that a Berliner ought not to be a West German political leader.

remains a fact that the interests of West Berlin are not best furthered by being drawn into the inevitable manceuvres of Federal election politics. It is another fact that one man cannot be the administrative chief of a large city efficiently three days of the week, and especially not when his staff are by no means all in agree- ment with him--two governing Senators have recently resigned. The question whether Brandt can run a major political party, a great city in permanent crisis, and an election is one for the SPD and they have answered it in his favour.

But the fate of Berlin is carried economically

by the Federal Republic and militarily by the Americans; for its Mayor to suggest that he is not 'the prefect of a French Department, but the independent elected ruler of a Federal Land [province]' is simple nonsense. It makes sense however, in a contender for the highest West

German power-position; indeed the attitude is forced upon him if he wants to win. So, more than a year before the election takes place, the campaign has started, and started with the use of Berlin's huge emotional shadow—an image only made more powerful by the ambivalence towards it of many West Germans.

The Christmas agreement would probably not have come off on the terms it did, if Brandt had not acted partially on his own, and if both the Chancellery and the Foreign Ministry in Bonn had not been overworked with the EEC talks in Brussels over agriculture. Though Brandt is more obviously involved between two worlds than Bonn, it is a matter of degree rather than a real difference. Brussels was then more im- mediately important than Berlin because Euro- pean unity is one of the forces that keeps Berlin free and because an agreement made for once, though dangerous, could be repudiated, as it has been. But to win the chance to change policies they believe to be mistaken Brandt and the SPD must use whatever weapons come to their hands in the election struggle--even if the weapon is Berlin.

Three queslions are thrown up by this early beginning of Germany's election campaign, all of which become more urgent with every year for all democratic countries.

The major one is the recurring gap in author- ity. In its crucial form the gap is seen with the death of President Kennedy at the end of

November and the preoccupation of the Bonn government through December—without this hiatus the family passes agreement in Berlin could not have happened in the form it did. In its common form the gap recurs for a cal- culable number of months before every major election in every (free) country. Since these elections include local ones in most countries, government is subject to serial hiccups. perhaps most clearly seen in Austria.

The problem is to restrict effectively the gap period. It is allied to the problem of the use of television as a direct influence on public opinion, and here the problem is not so much one of fair shares in influencing the masses, which is everywhere recognised. It is rather that men who are good at putting over policies to the voting masses are not by any means the same men who are good at doing what they are sup- posed to be elected for--that requires different and sometimes opposite qualities. The third re- lated problem is the chronic overburdening of the ruling group with work and publicity.

Eighteen months before the election. these related questions are all showing themselves clearly in Federal Germany; that a Berlin ques- tion focuses them only makes them more obvious than they might otherwise be. It might be pos- sible to get a self-denying agreement to keep Berlin out of the election three months or six weeks before it is due; to have one now—even if it were possible--would mean leaving the fire- works of politics to the outsiders and the wild men including, naturally, the East German Com- munists and Mr. Khrushchev. What to do . . ? Nobody has time to think.