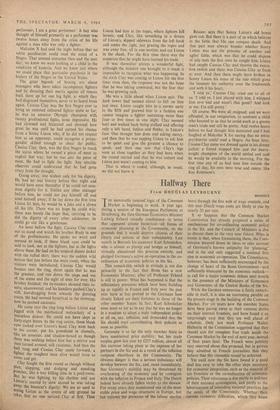 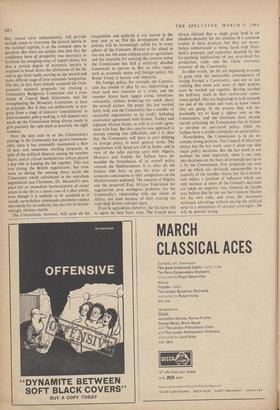 THE inexorable internal logic of the Common 1 Market is beginning to work. A year ago, during a session of the European Parliament at Strasbourg, the then German Economics Minister' Ludwig Erhard roundly condemned—in terms that appeared almost hysterical—all forms of economic planning in the Community, on the grounds that it would deprive citizens of their liberty and nations of their individuality. Last month in Brussels his successor Kurt Schmficker, who is almost as plump and benign as himself, virtually abandoned this position entirely, and pledged Germany's active co-operation in the co- ordination of economic policies in the Six.

This remarkable switch in attitude is not due primarily to the fact that Bonn has a new Economics Minister; after all Professor Erhard is still in power. What has happened is that the inflationary pressures which have been building up so rapidly in France and Italy over the past year have at last proved to the Germans how closely linked are their fortunes to those of the other member States. In fact, Kurt Schmticker even went so far as to say that he was no longer in a position to adopt a truly independent policy at all on, say, inflation, and demanded that the Six should start co-ordinating their policies as soon as possible.

Germany is so far the only member State to have maintained price stability; but her trade surplus grew last year by £235 million, almost all this increase taking place at the expense of her partners in the Six and as a result of the inflation rampant elsewhere in the Community. The obvious danger is that a serious imbalance will develop between the Six, and, more immediately, that Germany's stability may be threatened by overheating of the economy and by contagion with the inflation in France and Italy. The Dutch indeed have already fallen victim to the disease. For many years they maintained one of the most stable price and wage structures in Europe, but last autumn the pressures of the labour market

burst through the fine web of wage controls, and this year,Dutch wage costs are likely to rise by nearly 20 per cent.

It so happens that the Common Market Commission has already proposed a series of mechanisms for co-ordinating economic policy in the Six, and the Council of Ministers is due to discuss them in the very near future. What is ironic is that, when formulating them, the Com- mission watered down its ideas to take account of Germany's known antipathy for 'planning,' and in the end only suggested a minimal first step in economic co-operation. The Commission, however, has been sufficiently encouraged by the change of heart of the Bonn Government—and sufficiently dismayed by the economic outlook— to call for a major economic debate next month in the presence of the Ministers of Economics and Governors of the Central Banks of the Six.

While the German conversion is fairly remark- able in itself, it is also an interesting parable on the present stage in the building of the Common Market. For six years now the member States have been paring away at their customs duties on their internal frontiers, and have found it so surprisingly easy that they are well ahead of schedule. Only last week Professor Walter Hallstein of the Commission suggested that they should aim for complete free trade inside the Common Market by the end of next year, instead of four years later. The French were publicly very reserved about this proposal, but in private they admitted to French journalists that they believe that this timetable would be achieved.

Yet until now the Six have found it a good deal less easy to take the other steps necessary for economic integration, such as the removal of tax frontiers or the co-ordination of economic policies. Their reluctance is due partly to jealousy of their national sovereignties, and partly to the laboriousness of amending national practices for the needs of the Community. Whether their current 4conomic difficulties, which they know they cannot solve independently, will provide enough steam to overcome the natural inertia in the national capitals, is at the moment open to question. But there are people who feel that the confidence born of prosperity was necessary to facilitate the sweeping-away of import duties, but that a certain degree of economic anxiety is required to break down the inhibitions of the Six and to get them really moving on the second and more difficult stage of true economic integration. The Six, in fact, have already accepted the Com- mission's minimal proposals for creating a Community Budgetary Committee and a com- mittee of Central Bank Governors, and for strengthening the Monetary Committee, at least in principle. But if they are deliberately to pro- gress from a stage of tentative 'consultations' to joint economic policy-making, it will depend very much on the Commission being always ready to give precisely the right push at precisely the right moment.

Over the past year or so the Commission's prestige in the Community has grown immeasur- ably, since it has constantly maintained a flow of new, and sometimes startling proposals, in spite of the political disarray among the member States, and at critical moments has always played a key role in keeping the Six together. This was true during the British negotiations, but even more so during the ensuing chaos inside the Community which culminated in the marathon negotiations last Christmas. Dr. Mansholt's pro- posal for an immediate harmonisation of cereal prices in the Six is a classic case of a plan which, even though it is unlikely to be accepted as it stands, nevertheless commands enormous respect not merely for its audacity, but also for its breath- takingly obvious merits.

The Commission, however, will need all the imagination and audacity it can muster in the next year or so. For the development of new policies will be increasingly called for in every sphere of the Common Market as far ahead as one can see. On some subjects such as agriculture and the timetable for creating the customs union the Commission has had a relatively detailed framework to operate in. But on other topics, such as economic union and foreign policy, the Rome Treaty is laconic and imprecise.

On foreign policy, for example, the Commis- sion has tended to play by ear, improvising to meet each new situation as it arose, and the member States have tagged along, sometimes reluctantly, without bothering too much about the overall picture. On paper this has worked fairly well, and the Community has a number of successful negotiations to its credit, including association agreements with Greece, Turkey and eighteen African States, as well as a trade agree- ment with Iran. But this case-by-case approach is already running into difficulties, and it is clear that the Community will have to start defining its foreign policy in more general terms. The negotiations with Israel are still in limbo, and in view of the talks starting soon with Algeria, Morocco and Tunisia the Italians have de- manded the formulation of an overall policy towards the Mediterranean. It is, after all, the Italians who have to pay the price of any economic concessions to their competitors on the Mediterranean seaboard. The requests of Nigeria and the projected East African Federation for negotiations pose analogous problems for the Community's relationship with the whole of Africa, not least because of their existing ties with their former colonies there.

Even in agriculture, however, the Six have still to agree on their basic aims. The French have always claimed that a single price level is an absolute necessity for the creation of a common market in farm produce; but they are never- theless embarrassed at being faced with Man- sholt's proposal, and somewhat daunted by the far-reaching implications of any price-level for production, trade and the whole economic structure of the Community.

In other words, the Six are beginning to come to grips with the ineluctable consequences of having formed. a Community, and are at last realising that more and more of their policies must be worked out together. Having reached the half-way mark in their twelve-year transi- tional period, they are beginning to look towards the end of the tunnel and want to know where they are going. In the process they will un- doubtedly try to keep a tighter rein on the Commission, and the Germans have already started criticising the Commission for its failure to develop an anti-cartel policy, while the Italians have a similar complaint on social policy.

Nevertheless, the Commission is in an ex- tremely strong position. The Council of Ministers always has the last word, since it alone can take major policy decisions. But the last word is not perhaps the most important, since it can only take decisions on the basis of proposals put up to it by the Commission. Few proposals are ever put up which are obviously unacceptable to a majority of the member States, but the Commis- sion enjoys a position of influence which can only increase as more of the Council's decisions are taken on majority vote. General de Gaulle may believe that he can use the Common Market for his own ends, and exact the maximum economic advantage without paying the political price in a diminution of national sovereignty. He will be proved wrong.