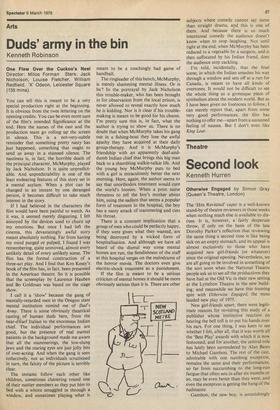 Duds' army in the bin

You can tell this is meant to be a very special production right at the beginning. It is obvious from the twee lettering on the opening credits. You can be even more sure of the film's intended Significance at the end. Here the names of the cast and the production team go rolling up the screen in silence. This is a not-very-subtle reminder that something pretty nasty has just happened, something that ought to send us away in a stunned silence. The nastiness is, in fact, the horrible death of the principal character, McMurphy, played by Jack Nicholson. It is quite unpredictable. And unpredictability is one of the least endearing features of this story set in a mental asylum. When a plot can be changed in an instant by one deranged person, it becomes difficult to take much interest in the story.

If I had believed in the characters the film would have been painful to watch. As it was, it seemed merely disgusting. I felt annoyed by the devices used to churn up my emotions. But once I had left the cinema, this devastatingly awful story meant absolutely nothing. Far from having my mind purged or pulped, I found I was remembering, quite unmoved, almost every unlikely detail of every unlikely scene. The film has the formal construction of a three-act play. And I find that Ken Kesey's book of the film has, in fact, been presented in the American theatre. So it is possible that the screenplay by Laurence Hauben and Bo Goldman was based on the stage show.

I call it a 'show' because the gang of mentally-retarded men in the Oregon state mental institution remind me. of Dad's Army. There is some obviously theatrical casting of human duds here, from the near-darf Italian to the enormous Indian chief. The individual performances are good, but the presence of real mental patients in the background made me aware that all the stammerings, the low-slung jaws and the staring eyes are just jolly bits of over-acting. And when the gang is seen collectively, not as individuals scrutinised in turn, the falsity of the picture is terribly clear.

The inmates follow each other like children, sometimes clustering round one of their nuttier members as they put him to bed with a whore smuggled in through a window, and sometimes playing what is meant to be a touchingly bad game of handball.

The ringleader of this bunch, McMurphy, is merely shamming mental illness. Or is he? In the portrayal by Jack Nicholson this trouble-maker, who has been brought in for observation from the local prison, is never allowed to reveal exactly how much he is kidding. Nor is it clear if his troublemaking is meant to be good for his chums. I'm pretty sure this is, in fact, what the author is trying to show us. There is no doubt that when McMurphy takes his gang out in a fishing-boat they lose the awful apathy they have acquired at their daily group-therapy. And it is McMurphy's friendship with an apparently deaf-anddumb Indian chief that brings this big man back to a shambling walkie-talkie life. And the young boy McMurphy puts to bed with a girl is miraculously better the next morning. Here, again, the author seems to say that unorthodox treatment would cure the world's loonies. When a prim nurse threatens to tell the boy's mother about him, using the sadism that seems a popular form of treatment in the hospital, the boy has a nasty attack of stammering and cuts his throat.

There is a constant implication that a group of men who could be perfectly happy, if they were given what they wanted, are being destroyed by a wicked form of hospitalisation. And although we have all heard of the dismal way some mental homes are run, the fiendishness of the staff at this hospital verges on the melodrama of the horror movie. The doctors even give electric-shock treatment as a punishment.

If the film is meant to be a serious criticism of mental homes it should be more obviously serious than it is. There are other subjects where comedy cannot say more than straight drama, and this is one of them. And because there is so much intentional comedy the audience doesn't know when to stop laughing. Not until right at the end, when McMurphy has been reduced to a vegetable by a surgeon, and is then suffocated by his Indian friend, does the audience stop cackling.

I'm told, incidentally, that the final scene, in which the Indian smashes his way through a window and sets off at a run for Canada, is meant to have all kinds of overtones. It would not be difficult to see the whole thing as a grotesque piece of symbolism about the modern world. But as I have been given no footnotes to follow, I can merely report that, apart from some very good performances, the film has nothing to offer me—apart from a sustained feeling of nausea. But I don't even like King Lear.