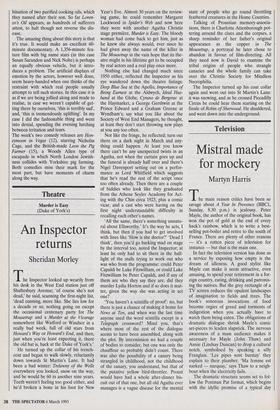 Under Seige comes from a genre of films, including the Die Hard and Lethal Weapon series, which the serious film goer is careful to avoid. Watching it, however, brings to mind the thought that the 'beauti- fully photographed-but-vapid' variety of art house film (Howard's End, The Long Day Closes, Tous Les Matins Du Monde etc.) had better watch out if it is not soon to be surpassed in that department by its humble cousin, the big-budget action movie. Under Seige, directed by Andrew Davies, is an extravagantly beautiful piece. Up on the big screen, the colours alone are quite spectacular. The film is also something of a modern day wonder of movie-making, for although the events depicted take place on board a vast, 900-foot, US Navy dread- nought drifting across the high seas of the Pacific Ocean, the action has actually been shot exclusively on dry dock in the bay of Mobile, Alabama, and the wave and wind effects are all artificial. Props on the set include full-scale replica of a Chinook heli- copter and a Gato-class Navy submarine, built out of scrap from a barge and a tug- boat. The film makers have managed to make a virtue out of the ship's frightening- ly enclosed spaces, and the way the camera tears wildly through narrow corridors, hatches and cupboards as if it were actually flying generates a good number of the thrills. Alongside this we have breathtaking shots of fog and mist as the ship sails through the darkness, accompanied by dim shapes of porpoises as they trail its prow.

The story, ridiculous and formulaic though it is, is told with a certain wit and panache. As in Dr Strangelove, a senior officer in the American Navy has gone doolally and is threatening to destroy the world with nuclear weapons. Though the film makes much of the CIA's various madnesses, the real George Bush has a cameo role at the start as the US Presi- dent. Perhaps it will only be a matter of time before we are going to see a reversal of the Ronald Reagan phenomenon, as ex- presidents and prime ministers begin to earn their pocket money playing them- selves on celluloid. Meanwhile the hero of Under Seige is the jaunty martial arts expert Steven Seagal, playing a galley cook who manages to save the Navy's bacon with a bomb made out of a nuclear missile and a condom. Seagal is so ludicrously good looking, you might be pleased to hear, that he provides another kind of visual distrac- tion for the audience entirely.

Lorenzo 's Oil is the story of the Odone family. In 1984 the parents, Augusto and Michaela, discovered that their five-year- old son had an extremely rare disease, Adrenoleukodystrophy. They were told that within about two years, after fits, paralysis, blindness and then almost total disfunction, he would certainly die. They immediately set about studying the illness, despite having no medical background, and as a result came up with a therapy, a corn- 'I guess we've entered the winter of our discontent.' bination of two purified cooking oils, which they named after their son. So far Loren- zo's Oil appears, as hundreds of sufferers attest, to halt though not reverse the dis- ease.

The amazing thing about this story is that it's true. It would make an excellent 60- minute documentary. A 1,356-minute fea- ture film with big name stars (in this case Susan Sarandon and Nick Nolte) is perhaps an equally obvious vehicle, but it intro- duces a problem. The artificial displays of emotion by the actors, however well done, seem heavy-handed when one thinks of the restraint with which real people usually attempt to tell such stories. In this case it is as if we are being jollied along and made to realise, in case we weren't capable of get- ting there by ourselves, 'this is terribly sad', and, 'this is tremendously uplifting'. In my case I did the fashionable thing and went into denial, spending the evening lurching between irritation and tears.

The week's two comedy releases are Hon- eymoon in Vegas (12), starring Nicholas Cage, and the British-made Leon the Pig Farmer (15), a Woody Allen type of escapade in which North London Jewish- ness collides with Yorkshire pig farming. Both comedies miss their mark for the most part, but have moments of charm along the way.