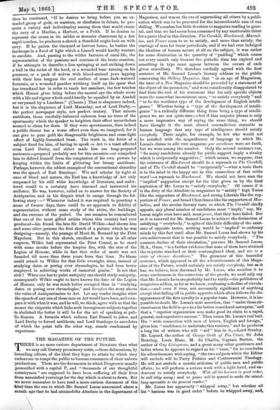 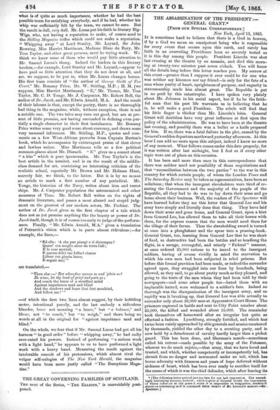 THE MAGAZINE OF THE FUTURE.

rillIERE is no more curious department of literature than what 1 we may call literary promissory notes, —those delineations, by -intending editors, of the ideal they hope to attain by which they -endeavour to tempt the public to become consumers of their unborn productions. These are the documents in which Progress is usually personified with a capital P, and "thousands of our thoughtful 'countrymen" are supposed to have been suffering all their lives from unsatisfied yearnings for the day which is about to dawn. But we never remember to have read a more curious document of this -kind than the one in which Mr. Samuel Lucas announced about a month ago that he had attained the Absolute in the department of Magazines, and was on the eve of superseding all others by a publi- cation which was to be procured for the inconsiderable sum of one all-Ming We confess but little devotion to magazine reading in gene- ral, and that we had never been consumed by any unutterable thirst fora purer ideal in this direction. The Cornhill, Blackwood, Macmil- lan, and Fraser seem to us to satisfy, and more than satisfy, the cravings of man for lunar periodicals, and if we had ever indulged the idealism of human nature at all on the subject, it was rather for some diminution in the quantity of "padding" which comes out every month only because the periodic time has expired and something in type must appear between the covers of each given miscellany. We therefore cordially agreed with the first sentence of Mr. Samuel Lucas's literary address to the public concerning the Shilling Magazine, that "in an age of Magazines, the issue of a New Magazine should be preceded by a statement of the object of the promoters," and were considerably disappointed to find from the rest of his statement that his only specific objects were the somewhat inconsistent ones, "to satisfy everybody" and "to be the worthiest type of the development of English intelli- gence." Whether being a "type of the development of intelli- gence" is a radically different thing from being a type of intelli- gence we are not quite sure ;—but if that majestic phrase is only a more impressive way of saying the same thing, we should have thought it the most absurd contradiction stateable in human language that any type of intelligence should satisfy everybody. There might, for example, be few who would not be satisfied with the magnificence of language in which Mr. Lucas's claims to edit THE magazine par excellence were set forth, but we were among the number. Only the second sentence ran, "So many candidates already for public support imply a rivalry which is reciprocally suggestive ;" which means, we suppose, that the existence of Blackwood should be a reproach to The Cornhill, and of The Cornhill should be "reciprocally"—what a tonic there is to the mind in the happy use in this connection of that noble word !—a reproach to Blackwood. We should not have seen the • " implied" suggestion except for the hint given us by the final aspiration of Mr. Lucas to "satisfy everybody." Of course if it is the duty of the Absolute in magazines to " satiety " high Tories like the supporters of Blackwood, and strong Liberals like the sup- porters of Fraser, and broad Churchmen like the supporters of Mac- millan, and the secular literary taste to which The Cornhill chiefly appeals, any plural number of candidates must "imply," nay, Mr. Lucas might even have said, naustprove, that they have failed. But as it is reserved for Mr. Samuel Lucas to achieve the distinction of satisfying "everybody," in spite of this little difficulty of the exist- ence of opposite tastes, nothing would be "implied" to ordinary minds by this fact until after Mr. Samuel Lucas had shown by his own achievement that it was possible to satisfy everybody. "The common decline of their circulation," pursues Mr. Samuel Lucas, M.A., Oxon, "is a further evidence that none of them have attained the requisite standard or their contemplated ideal, and are in a state of chronic decadence." The grammar of this beautiful sentence, which appeared in all the advertisements of this Maga- zine of the Future, would certainly not satisfy everybody, but as it has, we believe, been disowned by Mr. Lucas, who ascribes it to some carelessness in the correction of the proofs, we need only say that Mr. Lucas's facts are probably hard to verify—the publishers of magazines seldom, as far as we know, confessing a decline of circula- tion ;—and even if true, not necessarily significant of anything except that falling off in public appetite which of ten follows the dis- appearance of the first novelty in a popular taste. However, it is im- possible to doubt Mr. Lucas's next assertion, that "under these cir- cumstances the field is open to a far better-considered enterprise," and that a "superior organization may make good its claim to a rapid, general, and superlative success." Then comes Mr. Lucas's real bait. His "wide connection with men of letters, English and foreign," gives him "confidence to undertake this venture," and he produces a long list of writers who will "aid" him in it,—Lord Stanley, Mr. Layard, the author of George Geith of Fen Court, Sir John Bowring, Louis Blanc, M. du Chaillu, Captain Burton, the author of Guy Livingstone, and a great many other gentlemen and ladies whom he appears to regard as his "team," for he concludes his advertisement with saying, "the two subjects which the Editor will exclude will be Party Politics and Controversial Theology. He will not exclude a caustic criticism of public men and public affairs ; he will perform a serious work with a light hand, and en- deavour to satisfy everybody. With all his harness in good order, he will whip away; and no pains will be spared to make the miscel- lany agreeable to the general reader."

Mr. Lucas has apparently "whipped away," but whether all his "harness was in good order" before he whipped away, and,

what is of quite as much importance, whether he had the best possible team for satisfying everybody, and if he had, whether his whip was sufficiently felt by the team, we cannot be sure. But the result is dull, very dull. Mr. Lucas put his faith in literary Big- Wigs, who, not having a reputation to make, of course send to the Shilling Magazine trifles which could not make a reputation. "Whipping away" at Lord Stanley, Mr. Layard, Sir John Bowling, Miss Harriet Martineau, Madame Blaze du Bury, Mr. Tom Taylor, and other great persons, must be trying work. We think we know some of them who would pay little attention to Mr. Samuel Lucas's thong. Indeed the leaders in this literary tandem,—for example, Lord Stanley and Mr. Layard,—appear to have paid so little attention that they do not draw at all, and are, we suppose, to be put in, when Mr. Lucas changes horses. His first team consists of "the author of George Geith of Fen Court," Mr. Bonamy Price, Mr. W. Stirling, M.P. ; H. M. (we suppose, Miss Harriet Martineau), "B," Mr. Thorns, Mr. Torn Taylor, Mr. C. 1). Yonge, Mr. J. Carpenter, Mr. Robert Bell, the author of Dr. Jacob, and Mr. Edwin Arnold, M.A. And the result of their labours is that, except the poetry, there is no thoroughly bad thing in the magazine, while, without exception, there is not a notable one. The two tales may turn out good, but are at pre- sent of little promise, not having succeeded in defining even par- tially a single character in their first instalments. Mr. Bonamy Price writes some very good sense about currency, and draws some very unsound inferences. Mr. Stirling, M.P., quotes and com- ments on a few West-African proverbs from Captain Burton's book, which he accompanies by extravagant praise of that clever and lawless writer. Miss Martineau tells us a few political common-places about Mr. Disraeli. "E" gives us a sonnet about "a kiss" which is pure ipecacuanha. Mr. Tom Taylor's is the best article in the number, and is on the result of the middle- class demand for art, containing an interesting criticism of the realistic school, especially Mr. Brown and Mr. Holman Hunt, scarcely fair, we think, to the latter. But it is by no means an article to mark a first number of any periodical. Mr. Yonge, the historian of the Navy, writes about iron and turret ships. Mr. J. Carpenter popularizes the astronomical and other measures of Time. Mr. Robert Bell writes on the rights of dramatic literature, and passes a most absurd and stupid judg- ment on the greatest of our modern actors, Mr. Fechter. The author of Dr. Jacob gives us the first chapter of a tale which does not as yet promise anything like the beauty or power of Dr. Jacob itself, though it is of course too early to judge of the perform- ance. Finally, "Mr. Edwin Arnold, M.A." gives a translation of Petrarch's vision which is in parts almost ridiculous ;—for example, the lines,— "Ed ella: 'A che pur piangi e ti dist,empre?

Be wiser, let thy load of grief and pain go; And conch the lance of a steadfast mind Against impatience mad and blind And the shadows and fears that fret mankind, And follow,me !' "

—of which the first two lines almost suggest, by their hobbling metre, intentional parody, and the last embody a ridiculous blunder, lance not meaning "a lance," but "a balance," and librar, not "to couch," but "to weigh," and there being no words at all in the original for "against impatience mad and blind."

On the whole, we fear that if Mr. Samuel Lucas had got all his harness "in good order" before "whipping away," he had sadly over-rated his powers. Instead of performing "a serious work with a light hand," he appears to us to have performed a light work with a heavy hand. Measuring the result against the intolerable conceit of his pretensions, which almost rival the vulgar self-eulogies of The New York Herald, the magazine would have been more justly called "The Bumptious Maga- zine."