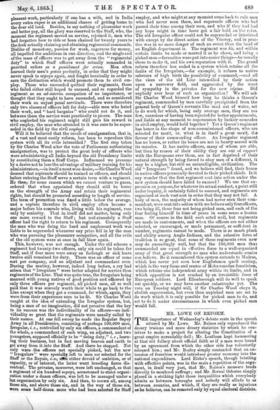 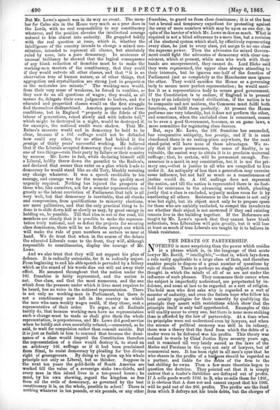 in the speech uttered by Mr. Lowe. Mr. Baines only reproduced the dreary truisms and more dreary statistics by which he con- trives to make a project for altering the Constitution of a great empire nnreadably dull; Mr. Leathern kept hammering at that old fallacy about official faith as if a man were bound by an agreement from which the other side has voluntarily released him ; and. Mr. Bazley simply contended that an ex- tension of franchise would introduce greater economy into the national expenditure. Lord Eleho's speech, though bristling with effective points, was in the mains repetition of the argu- ment, in itself very just, that Mr. Baines's measure tends directly to manhood suffrage ; and Mr. Bernal Osborne simply placed in a striking light those inequalities which everybody admits as between boroughs and nobody will allude to as between counties, and which, if they are really as injurious as he believes, can be removed only by equal electoral districts.

But Mr. Lowe's speech was in its way an event. The mem- ber for Caine site in the House very much as a peer does m the Lords, with no real responsibility to any constituency whatever, and the position elevates the intellectual courage natural to him almost into audacity. He grappled boldly i

with the real question at issue, which s, whether the intelligence of the country intends to change a mixed con- stitution, intended to represent all classes, but absolutely ruled by none, into a pure democracy. In sentences of unusual brilliancy he showed that the logical consequence of any blank reduction of franchise must be to make the working-men masters of the constituency, that they could if they would outvote all other classes, and that "it is an observation true of human nature, as of other things, that aggregation and crystallization are strong just in proportion as the molecules are minute." The working-men would, from their very sense of weakness, be forced to combine, as they now do on all questions of wages ; they would, as all masses do, delegate their own judgments to leaders, and the educated and propertied classes would on the first struggle find themselves disfranchised. America prospers under those conditions, but in England "property is the fabric of the labour of generations, raised slowly and with infinite toil," which might be destroyed in a night, would be destroyed if, for example, the national credit were shaken. That Mr. Baines's measure would end in democracy he held to be clear, because if a 101. suffrage could not be defended how could any other, for no other had behind it the prestige of thirty years' successful working. He believed that if the Liberals accepted democracy they would do either one of two things—ruin their party by failure or their country by success. Mr. Lowe in fact, while declaring himself still a Liberal, boldly threw down the gauntlet to the Radicals, and declared that sooner than enter on a plan which leads to democracy he would stand like an old Tory, blankly resisting any change whatever. It was a speech creditable to his courage, and courage was for the moment the quality most urgently required. Nothing has injured the prospects of those who, like ourselves, ask for a sounder representation so greatly as the latent conviction of Parliament that talk is all very well, but that democracy is inevitable, that all checks and compromises, from qualifications to minority elections, are mere palliatives, and that the only practical thing to be done is to slide down hill as slowly as may, by great energy in holding on, be possible. Till that idea is out of the road, till members see clearly that it is possible to make the represen- tation truly national, and so defeat the projects for securing class dominance, there will be no Reform except one which will make the rule of pure numbers as certain as near at hand. We do trust that when in the course of the debate the educated Liberals come to the front, they will, although responsible to constituencies, display the courage of Mr. Lowe.

And we also trust that they will not support his plan of defence. It is radically untenable, for it is radically unjust. From beginning to end his able speech is pervaded by a fallacy which as the sound of his words dies out will eat away their effect. He assumed throughout that the nation under the 101. franchise is fairly represented, and the nation is not. One class, and that the most numerous, and the one which from the pressure under which it lives most requires to be heard, has no voice in the national representation. There is not only no working-man in Parliament, but there is not a constituency now left in the country in which the men who earn weekly wages could, if they chose, seat a representative of their order. To argue, as all Radicals tacitly do, that because working-men have no representation such a change must be made as shall give them the whole representation, is preposterous, and Mr. Lowe did good service when he boldly and even scornfully refused,—consented, as he said, to wait for compulsion rather than commit suicide. But it is just as foolish in him to contend that because the domi- nance of a class would imperil the Constitution therefore the representation of a class would destroy it, to stand on an arbitrary 101, suffrage as if it had been proclaimed from Sinai, to resist democracy by pleading for the divine right of greengrocers. By doing so he gives up his whole

principle not only as Liberal, but as thinker. Suppose in the next ten years the gold-fields of South America are worked till the value of a sovereign sinks two-thirds, and every man in this island lives in a ten-pound house ; he must, by his own showing, regard the kingdom as free from all the evils of democracy, as governed by the best constituency it is, on the whole, possible to select! There is nothing whatever in ten pounds, or six pounds, or any, other

franchise, to guard us from class dominance; it is at the best but a brutal and temporary expedient for protesting against the sway of mere numbers which may be upon us one day, in spite of the barrier of which Mr. Lowe makes so mach. What is required is not a blind adherence to a mere line, but a revision of the electoral system which shall, by effectively representing every class, be just to every class yet assign to no one class the supreme power. Then the advocates for mixed Govern- ment could fight the advocates of democracy with clear con- sciences, which at present, while men who work with their hands are unrepresented, they cannot do. Lord Eleho said they were represented, the upper class always attending to their interests, but he ignores one-half of the function of Parliament just as completely as the Manchester men ignore the other. They would sacrifice the House as a governing body to secure more perfect representation ; he would sacri- fice it as a representative body to secure good government. If the Constitution is to endure, if England is to present a type of an infinitely varied civilization, if the nation is to be composite and not uniform, the Commons must fulfil both functions, and fulfil them perfectly. At present the House performs one very tolerably, but it does not perform the other, and sometimes, when the excluded class is concerned, ceases to be even a good Government, becomes, as on game laws, a mere committee for registering class decrees.

But, says Mr. Lowe, the 10/, franchise has succeeded, has comparative antiquity, has prestige, and if it is once abandoned there is no resting-place anywhere, for the next stand-point will have none of those advantages. We re- ply that if mere permanence, the sense of finality, is so valuable, the easiest way to obtain it is to proclaim universal suffrage ; that, be certain, will be permanent enough. Per- manence is a merit in any constitution, but it is not the pri- mary one,—that is justice to all who are compelled to live under it. An antiquity of less than a generation may exercise some influence, but not half so much as a consciousness of justice would do. A 10/. suffrage does not represent the nation, and till the nation is represented there is no foot- hold for resistance to the advancing army which, pleading justly that a class is excluded, unjustly makes room for it by smothering all others. Resistance to the advance is not only wise but right, but its object must only be to prepare space for those who are unfairly excluded, to compel the invaders to see whether their object is not answered if they and existing tenants live in the building together. If the Reformers are taught by Mr. Lowe's speech that they cannot have blank reductions, true Liberalism will gain greatly, but it will lose at least as much if true Liberals are taught by it to believe in blank resistance.