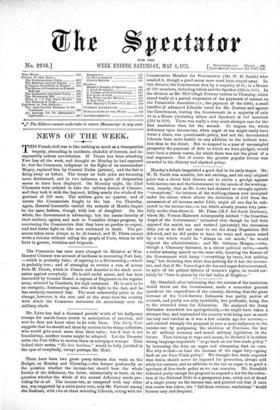 THIS French civil war is like nothing so much as a transpontine tragedy, abounding in incidents, chokeful of horrors, and in- -expressibly tedious nevertheless. M. Thiers has been attacking Fort Issy all the week, and thought on Monday he had captured it ; but the Commune, indignant at the flight of its commandant Megey, replaced him by General Eudes (printer), and the fort is firing away as before. The troops on both sides are becoming more determined, and in two instances a spirit of desperation seems to have been displayed. On Monday night, the 22nd `Chasseurs were ordered to take the railway station of Clamart, and they took it with the bayonet, killing nearly the whole of the garrison of 360 men. The soldiers gave no quarter, and of course the Communists fought to the last. On Thursday, again, General Lacretelle carried the redoubt of Moulin Saquet 'in the saps fashion, though with less of slaughter. On the whole, the Government is advancing; but the insane ferocity of their soldiery, agents, and mob in Versailles delays progress, by -convincing the Communists that they have no pardon to expect, and had better fight on like men sentenced to death. The pri- soners taken seem always to be ill-treated, and M. Thiers cannot write a circular without calling the people of Paris, whom he will have to govern, wretches and brigands.