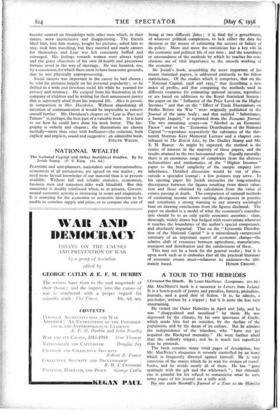 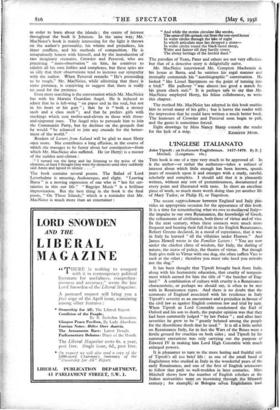 A TOUR TO THE HEBRIbES

I Crossed the Minch. By Louis MacNeice. (Longmans.. los. 6d.)

MR. MeicNocE's book is a successor to Letters from Iceland. It is a hotch-potch of poems and parodies, fantasy, prejudices, journals, and a good deal of fiction. It is, he admits, a. pot-boiler, written by a tripper ; but 'it is none the less very

He visited the Onter Hebrides in April and July, and he was "disappointed and tantalised" by them; I-le was depressed by the climate, by his own ignorance of Gaelic, which made him feel an outsider, by the decline of the population, and by the decay of its culture. But he admires the independence of the islanders, who " have not yet, acquired the Blackpool mentality." He went further afield than the ordinary tripper, and he is much less superficial than he pretends.

The book contains many vivid pages of description, but Mr. MacNeice's eloquence is severely controlled by an irony" Which is frequently directed against himself. He is very'. conscious of the snares which lie in wait for writers of travel- books, and he avoids nearly all of them. He has "gone sparingly with the gilt and the whitewash"; but although one is grateful for his refusal to romanticise what he sees, some pages of his journal are a trifle arid.

• .No.,orie rods Bosvrell's- Japrnal. of g Tour- to-the *brides. in order to learn about the islands ; the centre of interest throughout- the book is Johnson. In the -mime MacNeice's book is mainly interesting for the light it throws on the author's personality, his whims and prejudices, his inner conflicts, and his methods of composition. He is scrupulously honest with himself, and by the introduction' of ' two imaginary creatures, Crowder and Perceval, who are practising " mass-observation " on him, he contrives to eithibit all his own foibles and complexes, but these spies are so silly that their observations tend to increase our sympathy with the author. When Perceval remarks "He's pretending to be tough," Mr. MaeNeice, white admitting that there is some pretence, is contriving to suggest that there is really

Even more searching is the conversation which Mr. MacNeice has with his Marxist Guardian Angel. He is induced to admit that he is left-wing "on paper and in the soul,.but not in his heart or his guts " ; that he is "both a money snob and a class snob"; and that he prefers girls with stockings which cost twelve-and-eleven to those with three- and-sixpenny ones. The Angel tries to persuade him to join the Communist Party, but he declines on the.grounds that he would "be ashained to jOiii. any crusade for the better-

ment of the -world." - - - - - - - ' ,Readers of Letters from Iceland will be glad to meet Hetty once more. She contributes a long effusion, in the course of which she manages to be funny about her constipation—from which Mr. MacNeice also suffered. He (or Hetty) is a master of the sudden anti-climax : '" I turned out the lamp and lay listening to the noise of the elements, at least I thought they were the elements until they suddenly said Amen and lapsed to silence; . . " " The book contains several poems. The Ballad of Lord Leverhulme is amusing, Audenesque, and slight. "Leaving Barra" is a moving expression of one who is "hot for cer- tainties in this our life." "Bagpipe Music" is a brilliant improvisation. But the best thing in the book is the final poem, "On Those Islands," which is a reminder that Mr.

MacNeice is much more than an entertainer : - "And while the stories circulate ltie smoke, Thesensentlife spread:tout from the one-eyed-house In wider circles through the lake of night In which articulate man has dropped a stone— In wider circles round the black-faced sheep, Wider and fainter-till they hardly crease The ebony heritage of the herded dead."

The parodies of Yeats, Pater and others are not very effective, but that of a detective story is delightfully naive.

Mr. MacNeice interviewed Mr. Compton Mackenzie in his house at Barra, -and - he satirises his legal- manner and iconically commends his_ ".autobiographic "-conversation. He looked "like Lionel B,oiymore on the point of turning into a. bird." His pullover "'was almost too good a match for his green check Suit." It is perhaps safe to say that Mr. MacNeice employed Hetty, his feline Collaborator, to write this chapter.

The method Mr. MacNeice has adopted in this book enables him to reveal many of his gifts ; but it leaves the reader with the impression that he could have written a much better book. The humours of Crowder and Perceval soon begin to pall and the gusto is sometimes forced.