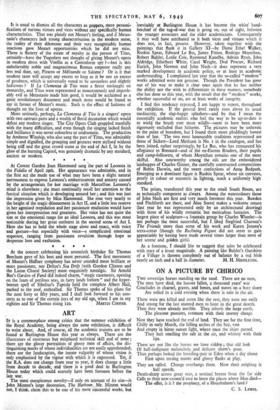 ON A PICTURE BY CHIRICO

Two sovereign horses standing on the sand. There are no men, The men have died, the houses fallen, a thousand years' war Concludes in charnel, graves, and bones, and waves on a bare shore Are rolled in a cold evening when there is rain in the air.

These were not killed and eaten like the rest, they were too swift And strong for the last stunted men to hunt in the great dearth. Then they were already terrible. They inherit the large earth, The pleasant pastures, resonant with their stormy charge.

Now they have reached the end of land. They see for the first time, Chilly in early March, the falling arches of the bay, vast And empty in bitter sunset light, where once the ships passed. They halt smelling the salt in the air, and whinny with their lips.

These are not like the horses we have ridden ; that old look Of half-indignant melancholy and delicate alarm's gone.

Thus perhaps looked the breeding-pair in Eden when a day shone First upon tossing manes and glossy flanks at play.

They are called. Change overhangs them. Now their neighing is half speech.

Death-sharp across great seas, a seminal breeze from the far side Calls to their new-crown'd race to leave the places where Man died— The offer, is it ? the prophecy, of a Houyhnhnm's land ?