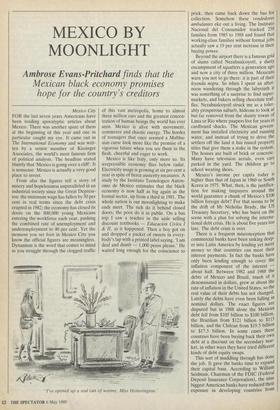 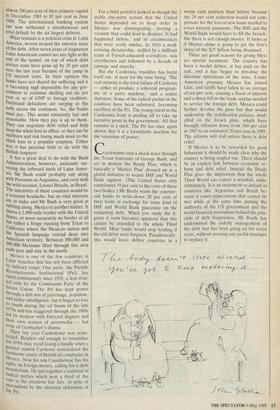 Ambrose Evans-Pritchard finds that the

Mexico City FOR the last seven years Americans have been reading apocalyptic articles about Mexico. There was another spate of them at the beginning of this year and one in particular caught my eye. It came out in The International Economy and was writ- ten by a senior member of Kissinger Associates, the world's most famous firm of political analysts. The headline stated bluntly that 'Mexico is going over a cliff'. It is nonsense. Mexico is actually a very good place to invest.

From afar the figures tell a story of misery and hopelessness unparalleled in an industrial society since the Great Depress- ion: the minimum wage has fallen by 50 per cent in real terms since the debt crisis erupted in 1982; the economy has closed its doors on the 800,000 young Mexicans entering the workforce each year, pushing the combined rate of unemployment and underemployment to 40 per cent. Yet the moment you set foot in Mexico City you know the official figures are meaningless. Dynamism is the word that comes to mind as you struggle through the clogged traffic of this vast metropolis, home to almost three million cars and the greatest concen- tration of human beings the world has ever seen. Mexico is alive with movement, commerce and chaotic energy. The hordes of teenagers that once seemed a Malthu- sian curse look more like the promise of a vigorous future when you see them in the flesh, cheerful and eager to work.

Mexico is like Italy, only more so. Its irrepressible economy flies below radar. Electricity usage is growing at six per cent a year in spite of fierce austerity measures. A study by the Instituto Tecnologico Auton- omo de Mexico estimates that the black economy is now half as big again as the formal sector, up from a third in 1981. The whole nation is out moonlighting to make ends meet. The rich do it behind closed doors; the poor do it in public. On a bus trip I saw a teacher in the aisle selling discount textbooks — Educacion Civica I & II, as it happened. Then a boy got on and dropped a packet of sweets in every- body's lap with a printed label saying, 'I am deaf and dumb — 1,000 pesos please.' He waited long enough for the conscience to

"I've opened up a real can of worms, Miss Hetherington.'

prick, then came back down the bus for collection. Somehow these vendedores ambulantes eke out a living. The Instituto Nacional del Consumidor tracked 258 families from 1985 to 1988 and found that working-class families without formal jobs actually saw a 19 per cent increase in their buying power. Beyond the airport there is a famous grid of slums called Nezahualcoyotl, a dusty encampment of squatters a generation ago and now a city of three million. Mexicans warn you not to go there: it is part of their leyenda negra. So when I spent an after-. noon wandering through the labyrinth it was something of a surprise to find super- markets, and bakers selling chocolate truf- fles. Nezahualcoyotl struck me as a toler- ably prosperous suburb, hideous to look at but far removed from the shanty towns of Lima or Rio where paupers live for years in cardboard shacks. The Mexican govern- ment has installed electricity and running water, and instead of trying to drive the settlers off the land it has issued propertY titles that give them a stake in the system. The houses are built of brick or concrete. Many have television aerials, even cars parked in the yard. The children go to school wearing shoes. Mexico's income per capita today is higher than that of Japan in 1960 or South Korea in 1975. What, then, is the justifica- tion for making taxpayers around the world guarantee a chunk of Mexico's $100 billion foreign debt? For that seems to be the drift of Mr Nicholas Brady, the US Treasury Secretary, who has burst on the scene with a plan for solving the interna- tional debt crisis. He is about five years too late. The debt crisis is over.

There is a frequent misconception that commercial banks have been sinking deep- er into Latin America by lending yet more money so that countries can meet their interest payments. In fact the banks have only been lending enough to cover the inflation component of the interest — about half. Between 1982 and 1988 the debts of Mexico and Brazil, much of it denominated in dollars, grew at about the rate of inflation in the United States, so the real value of their debts has not changed. Lately the debts have even been falling in nominal dollars. The exact figures are disputed but in 1988 alone the Mexican debt fell from $105 billion to $100 billion, the Brazilian from $121 billion to $115 billion, and the Chilean from $19.5 billion to $17.5 billion. In some cases these countries have been buying back their own debt at a discount on the secondary mar- ket, in other ways they have tried different kinds of debt equity swaps. This sort of muddling through has done the job. It gave the banks time to expand their capital base. According to William Seidman, Chairman of the FDIC (Federal Deposit Insurance Corporation), the nine biggest American banks have reduced their exposure in developing countries from almost 200 per cent of their primary capital in December 1983 to 85 per cent in June 1988. The international banking system can now withstand a simultaneous and total default by the six largest debtors. What remains is a political crisis in Latin America, woven around the emotive issue of the debt. After seven years of stagnation Latin Americans cannot see any light at the end of the tunnel, on top of which debt service costs have gone up by 20 per cent over the last year because of the jump in US interest rates. In their Opinion the banks have not shared the suffering and it IS becoming nigh impossible for any gov- ernment to continue shelling out six per cent or so of GNP to foreign creditors. Firebrand defaulters are surging in the Polls across the continent. So, the banks must pay. This seems eminently fair and reasonable. How they pay is up to them. They can negotiate debt relief and help keep the white hats in office: or they can be stubborn and risk losing much more to the black hats in a populist eruption. Either Way it has precious little to do with the British taxpayer. It has a great deal to do with the Bush Administration, however, anxiously sur- Yeying the leftward lurch of Latin Amer- ica. Mr Bush could probably rub along With Peronists in Argentina, and even with the wild socialist, Leonel Brizola, in Brazil. The instability of these countries would be a constant headache, but no vital interests are at stake and Mr Bush is very good at rubbing along. Mexico is another matter. It Shares a 2,000 mile border with the United States, or more accurately no border at all but rather a fringe running from Texas to California where the Mexican nation and

the Spanish language extend deep into American territory. Between 300,000 and 500,000 Mexicans filter through this area each year and stay in the north. Mexico is one of the few countries in Latin America that has not been afflicted

by military coups. One party, the Partido Revolucionario Institucional (Pri), has ruled continuously since 1929, a feat rival- led only by the Communist Party of the Soviet Union. The Pri has kept power through a deft mix of patronage, populism, a. nd police intelligence, but it began to lose

its touch during the oil boom of the late 1970s and has staggered through the 1980s led.by tecnicos with Harvard degrees and their own version of perestroika — but none of Gorbachev's drama.

the 1930s may recall losing a bundle when a general named Cardenas nationalised the handsome assets of British oil companies in Mexico. Now his son Cuauhtemoc has his

Sights on foreign money, calling for a debt moratorium. He put together a coalition of radical parties which won a third of the vote in the elections last July, in spite of Precautions by the electoral alchemists of the Pri.

For a brief period it looked as though the stable one-party system that the United States depended on to keep order in Mexico was disintegrating, leaving a vacuum that could lead to disaster. It had happened before, and in circumstances that were eerily similar. In 1910 a mod- ernising dictatorship, staffed by a brilliant team of French-educated scietztificos, was overthrown and followed by a decade of carnage and anarchy.

But the Cardenista brushfire has burnt itself out, at least for the time 'being. The real surprise is the total failure of Cardenas — either to produce a coherent program- me or a party machine,' said a senior diplomat. Some of the radical parties in the coalition have been suborned, becoming satellites of the Pri. The young talent in the Cardenista front is peeling off to take up lucrative posts in the government. All that remains is a shell. The Pri has once again shown that it is a formidable machine for the retention of power.

Cardenismo sent a shock wave through the Texan fraternity of George Bush, and set in motion the Brady Plan, which is basically a 'Mexico Plan' dressed up as a global initiative to secure IMF and World Bank support. (The United States only contributes 19 per cent to the costs of these two bodies.) Mr Brady wants the commer- cial banks to write-down 20 per cent of their loans in exchange for some kind of IMF and World Bank guarantee on the remaining debt. When you study the fi- gures it soon becomes apparent that this cannot be extended to the whole Third World. Most banks would stop lending if the old debts were forgiven. Paradoxically, this would leave debtor countries in a

worse cash position than before because the 20 per cent reduction would not com- pensate for the loss of new loans needed to cover interest payments. The IMF and the World Bank would have to fill the breach, but there is not enough money. It looks as if Mexico alone is going to get the lion's share of the $25 billion being discussed.

There are good reasons for giving Mex- ico special treatment. The country has been a model debtor, it has paid on the nail, and it has begun to privatise the dinosaur operations of the state. Under American pressure Mexico has joined Gatt, and tariffs have fallen to an average of ten per cent, causing a flood of imports and a sharp fall in the trade surplus needed to service the foreign debt. Mexico could further devalue the peso but that would undermine the stabilisation policies, mod- elled on the Israeli plan, which have brought inflation down from 160 per cent in 1987 to an estimated 20 per cent in 1989. The reforms will stall unless there is debt relief.

If Mexico is to be rewarded for good behaviour it should be made clear why the country is being singled out. There should be an explicit link between economic re- form and debt relief. Instead the Brady Plan gives the impression that the whole Third World can expect a windfall, indis- criminately. It is an incitement to default in countries like Argentina and Brazil be- cause it raises expectations that cannot be met while at the same time putting the authority of the US government and the world financial institutions behind the prin- ciple of debt forgiveness. Mr Brady has undermined the orderly management of the debt that has been going on for seven years, without Creating any useful structure to replace it.