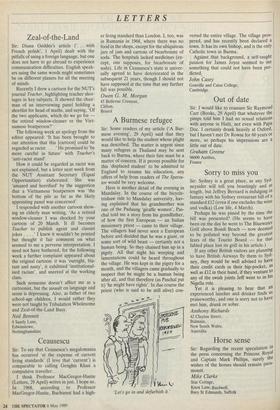 Sir: Diana Geddes's article (`. . with French polish', 1 April) dealt with the pitfalls of using a foreign language, but one does not have to go abroad to experience communication difficulties. English speak- ers using the same words might sometimes be on different planets for all the meeting of minds.

Recently I drew a cartoon for the NUT's journal Teacher, highlighting teacher shor- tages in key subjects. It showed the chair- man of an interviewing panel holding a shortlist for head of maths, and saying, 'Of the two applicants, which do we go for — the retired window-cleaner or the Viet- namese boatperson?'

The following week an apology from the editor appeared: 'It has been brought to our attention that this [cartoon] could be regarded as racist. . . .' He promised to 'be more careful in future' with Teacher's 'anti-racist stand'.

How it could be regarded as racist was not explained, but a letter next week from the NUT Assistant Secretary (Equal Opportunities) elaborated. She was 'amazed and horrified' by the suggestion that a Vietnamese boatperson was 'the bottom of the pile as far as the likely appointing panel was concerned'.

I responded with another cartoon show- ing an elderly man writing, 'As a retired window-cleaner I was shocked by your cartoon of 20 March. It ill becomes Teacher to publish ageist and classist jokes . . . I knew it wouldn't be printed but thought it fair comment on what seemed to me a perverse interpretation. I need not have bothered, for the following week a further complaint appeared about the original cartoon: it was 'outright, bla- tant and nasty', it exhibited 'institutional- ised racism', and sneered at the working class.

Such nonsense doesn't affect me as a cartoonist, but the assault on language and sense is depressing. Also, as father of two school-age children, I would rather they were not taught by Tribulation Wholesome and Zeal-of-the-Land Busy.