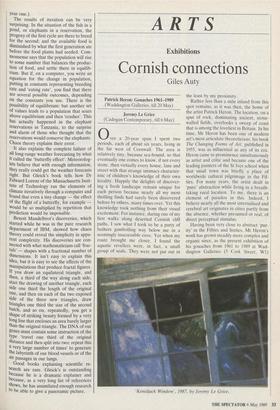 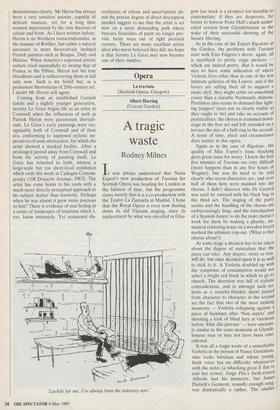 Jeremy Le Grice (Cadogan Contemporary, till 6 May) ver a 20-year span I spent 0 two periods, each of about six years, living in the far west of Cornwall. The area is relatively tiny, because sea-bound, so that. eventually one comes to know, if not every' stone, then virtually every house, lane and street with that strange intimacy character- istic of children's knowledge of their own locality. Happily the delights of discover- ing a fresh landscape remain unique for each person because nearly all my most thrilling finds had surely been discovered before by others, many times over. Yet this knowledge took nothing from their visual excitement. For instance, during one of my first walks along deserted Cornish cliff paths. I saw what I took to be a party of bathers gambolling way below me in a seemingly inaccessible cove. Yet when my route brought me closer, I found the aquatic revellers were, in fact, a small group of seals. They were not put out in the least by my proximity.

Rather less than a mile inland from this spot remains, as it was then, the home of the artist Patrick Heron. The location, on a spur of rock, dominating ancient, stone- walled fields, overlooks a sweep of coast that is among the loveliest in Britain. In his time, Mr Heron has been one of modern art's most articulate theoreticians: his book The Changing Forms of Art, published in 1955, was as influential as any of its era. Heron came to prominence simultaneously as artist and critic and became one of the leading painters of the St Ives school when that small town was briefly a place of worldwide cultural pilgrimage in the Fif- ties. For many years, the artist dealt in 'pure' abstraction while living in a breath- taking rural location. To me, there is an element of paradox in this. Indeed, I believe nearly all the most internalised and cerebral art originates in cities partly from the absence, whether presumed or real, of direct perceptual stimulus.

Having been very close to abstract 'pur- ity' in the Fifties and Sixties, Mr Heron's work has grown steadily more complex and organic since, as the present exhibition of his gouaches from 1961 to 1989 at Wad- dington Galleries (5 Cork Street, W1) 'Kenidjack Window', 1987, by Jeremy Le Grice. demonstrates clearly. Mr Heron has always been a very sensitive painter, capable of delicate nuances, yet for a long time seemed imprisoned by his own theories of colour and form. As I have written before, Heron is no Northern transcendentalist, in the manner of Rothko, but rather a natural successor to more decoratively inclined French painters such as Braque, Dufy and Matisse. When America's exported artistic culture tried successfully to swamp that of France in the Fifties, Heron lost his true bloodlines and is rediscovering them in full only now. Such is my belief but, as a prominent theoretician of 20th-century art, I doubt Mr Heron will agree.

Coming from an established Cornish family and a slightly younger generation, Jeremy Le Grice began life as an artist in Cornwall when the influences of such as Patrick Heron were paramount thereab- outs. Le Grice's early paintings were rec- ognisably both of Cornwall and of their era, conforming to supposed stylistic im- peratives of semi-abstraction, for which the artist showed a marked facility. After a prolonged period away from Cornwall and from the activity of painting itself, Le Grice has returned to both, witness a large-scale but too short-lived exhibition which ends this week at Cadogan Contem- porary (108 Draycott Avenue, SW3). The artist has come home to his roots with a much more directly perceptual approach to his subject matter than formerly. Perhaps when he was absent it grew more precious to him? There is evidence of real feeling in a series of landscapes of locations which too, know intimately. Yet occasional dis-

cordances of colour and uncertainties ab- out the precise degree of direct description needed suggest to me that the artist is set now on a more demanding path where bravura flourishes of paint no longer pro- vide facile ways out of tight pictorial corners. There are many excellent artists alive who never believed they did; my hope is that Jeremy Le Grice may now become one of their number.